Apart from that, this is the first platform from Intel that supports PCIe 4.0, and Intel has managed to deliver an outstanding IPC of 19% while staying on the same process node. Rocket Lake is a new architecture but still based on older less-efficient 14nm node, with fewer cores and a higher price tag. 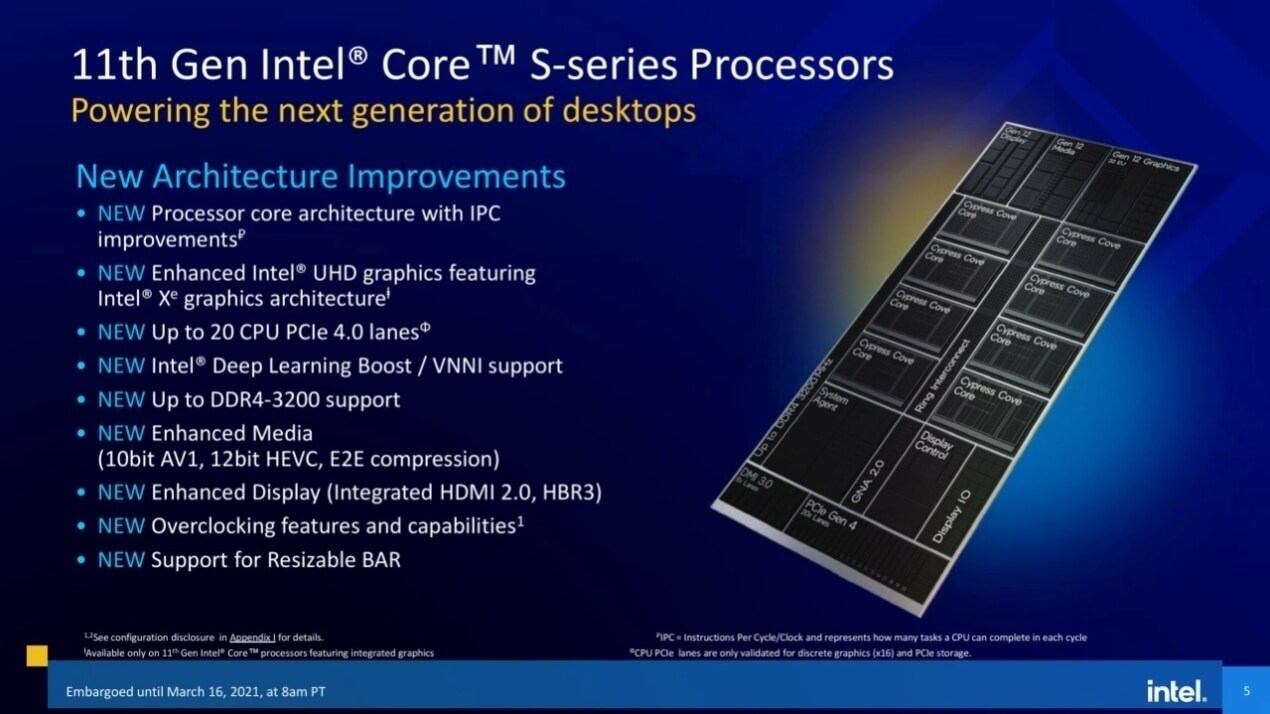 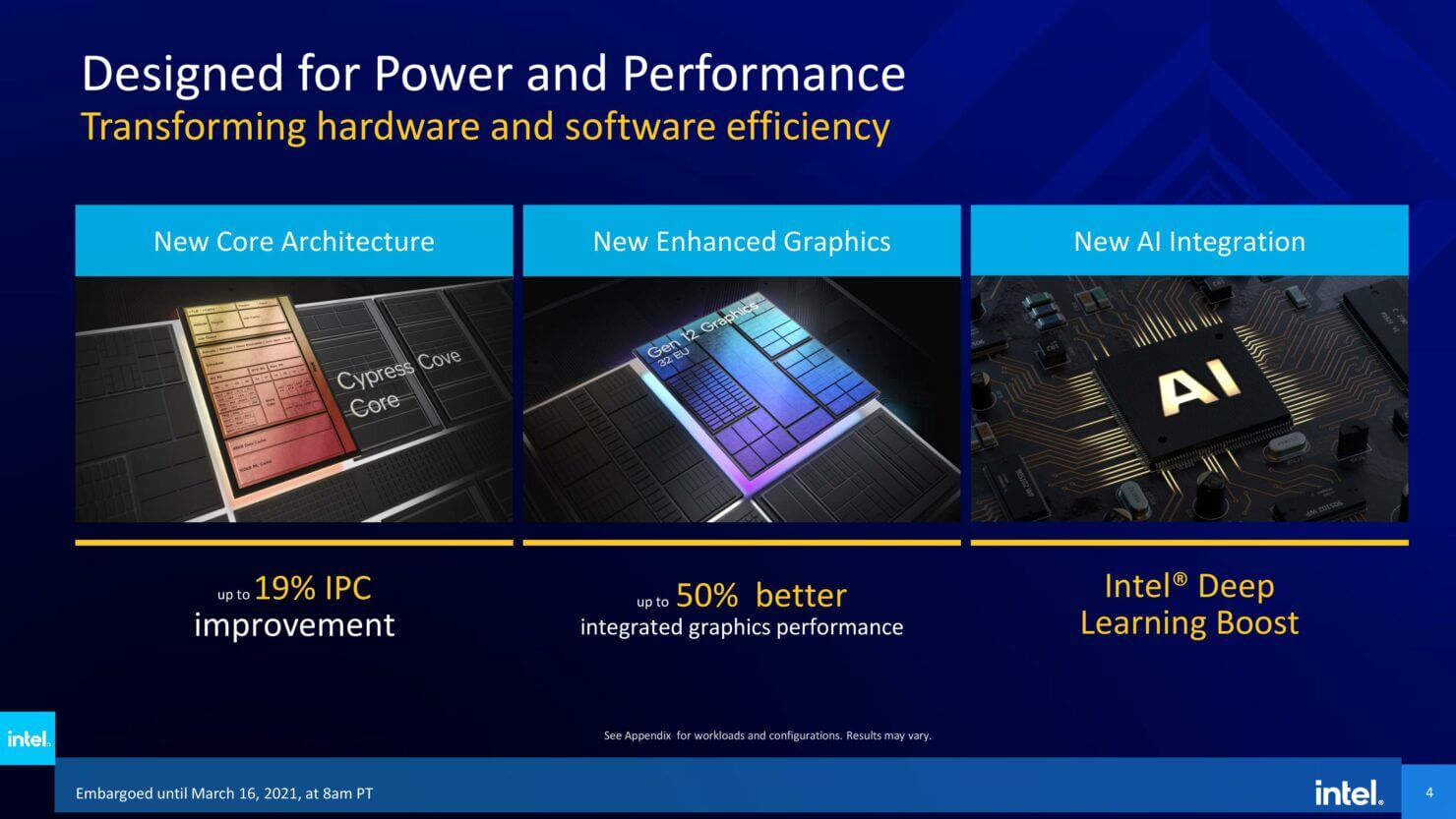 The company has shared some gaming benchmarks of these 11th gen core processors. The new architecture brings up to 19% gen-over-gen instructions per cycle (IPC) improvement for the highest frequency cores and adds Intel UHD graphics featuring the Intel Xe graphics architecture for rich media and intelligent graphics capabilities.

That matters because games and most applications continue to depend on high-frequency cores to drive high frame rates and low latency.

Rocket Lake will house exactly 20 lanes of PCIe 4.0. Apart from Deep Learning Boost and VNNI support, it will also have native support for DDR4-3200 RAM without overclocking the IMC, as well as support for 10bit AV1, and 12bit HEVC.

The integrated graphics also has support for the new “Resizable BAR” feature. At the top of the stack is the 11th Gen Intel Core i9-11900K, featuring unmatched performance with up to 5.3 gigahertz, eight cores, 16 threads and 16 megabytes of Intel Smart Cache.

According to Intel these are the improvements which come with this generation:

Here are the full specs as well as the pricing of the 11th gen core processor lineup (in 1,000-unit tray quantities). The flagship Core i9 11900K is available for purchase for $539, while the KF variant is available for $513 USD or $64 per core. KF series of SKUs lack integrated graphics, iGPU.

The Core i7-11700F has a price tag of just $289 or $37 per core, and is the cheapest SKU in the i7 lineup. For the remaining specs as well as the pricing info kindly refer to these official Intel marketing slides. 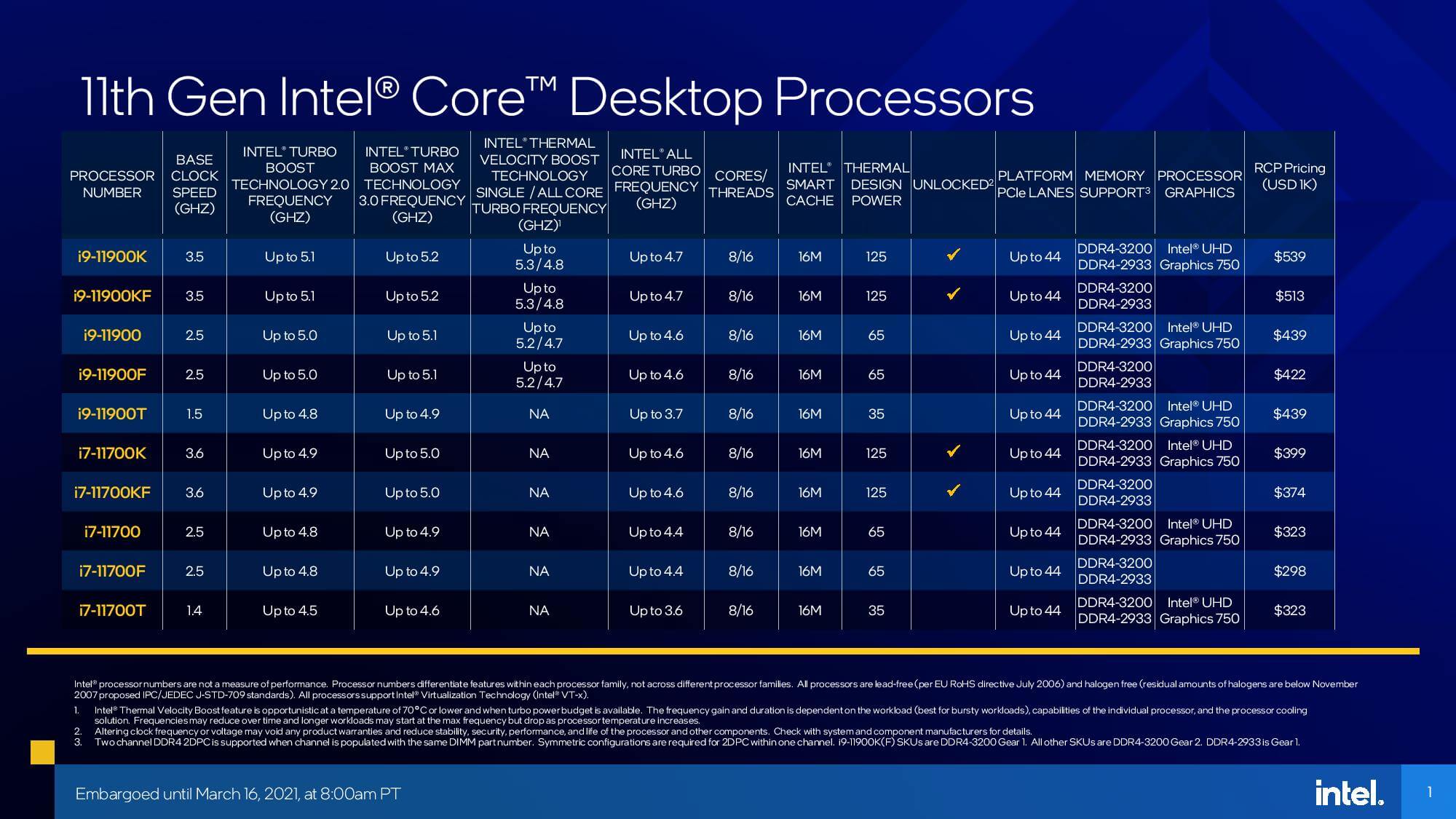 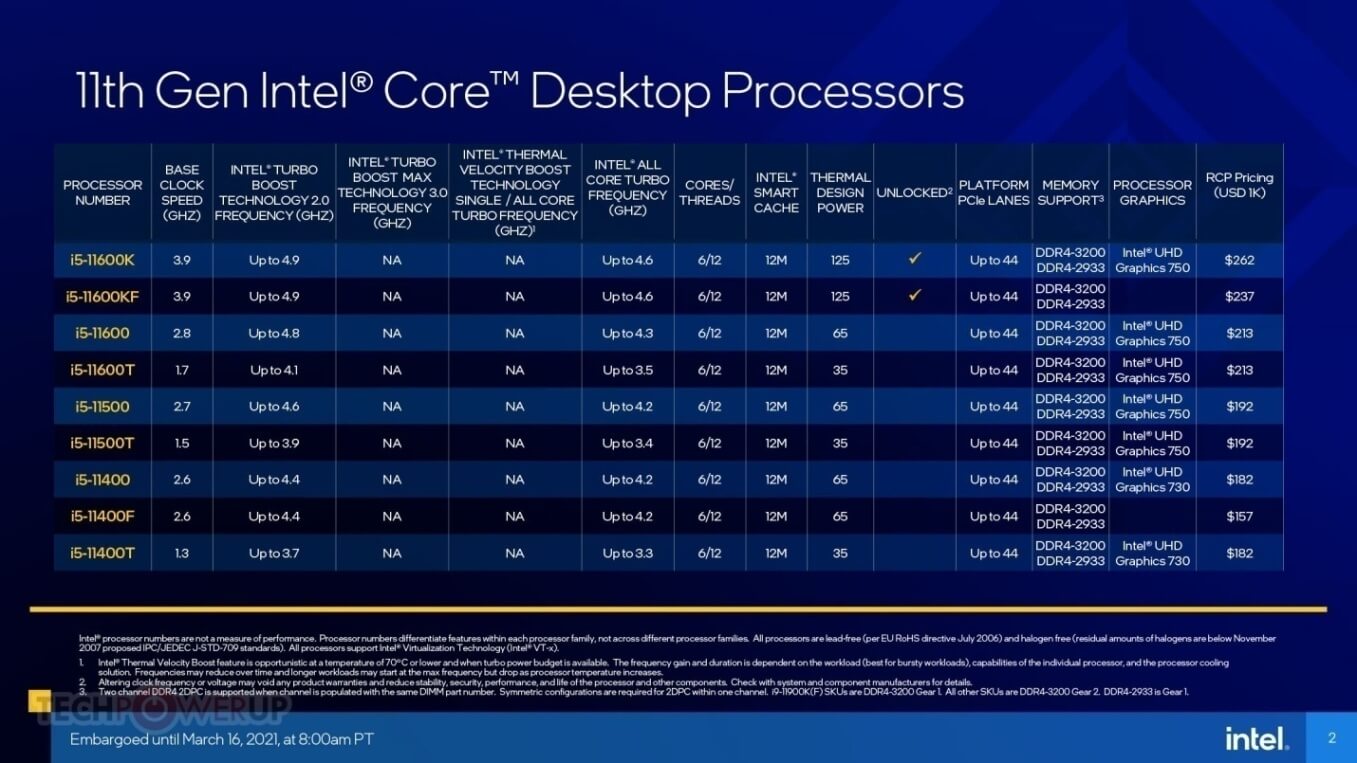 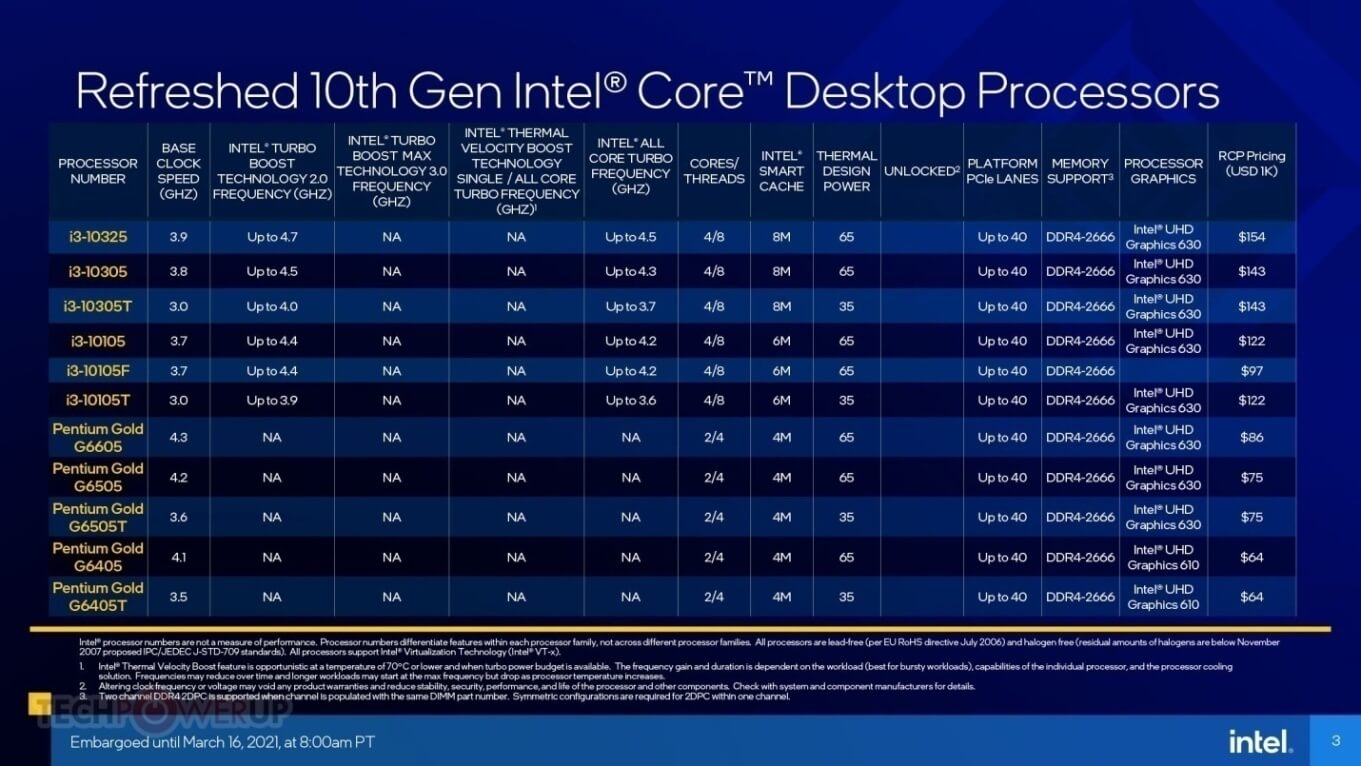 The company has also shared some gaming benchmark slides. Though, as always with any first-party benchmarks, you should take them with a grain of salt. It would be much better to wait for third-party tests. 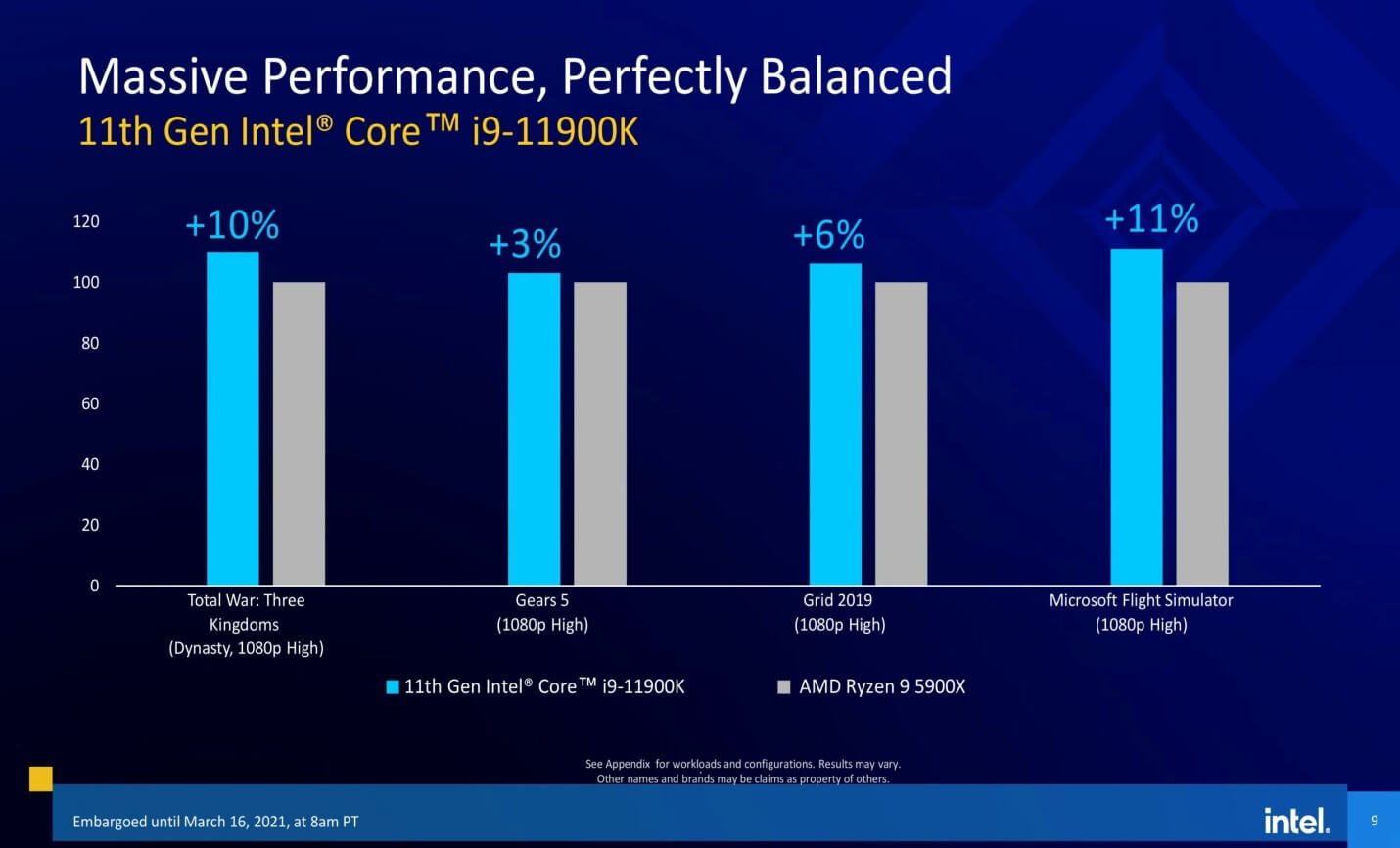 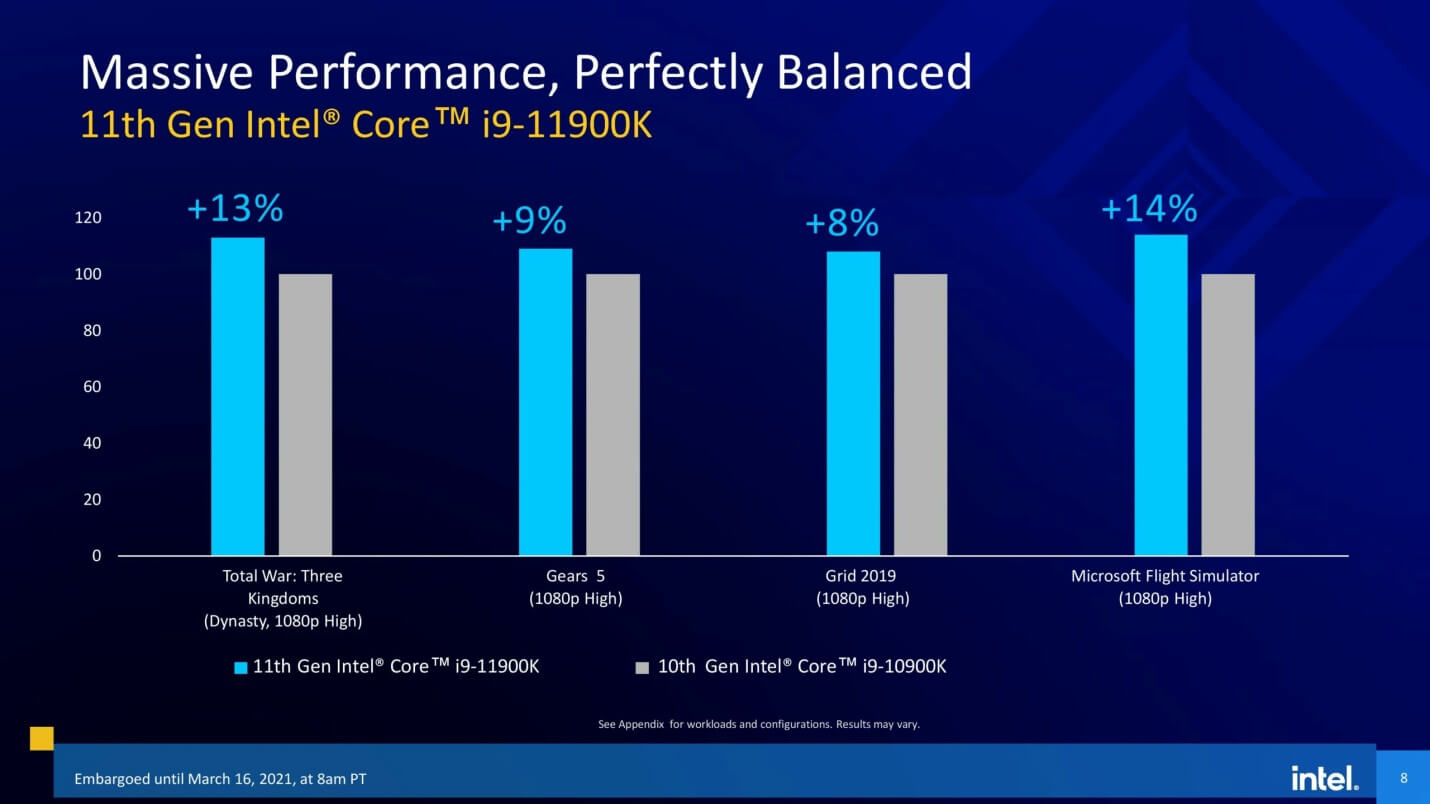 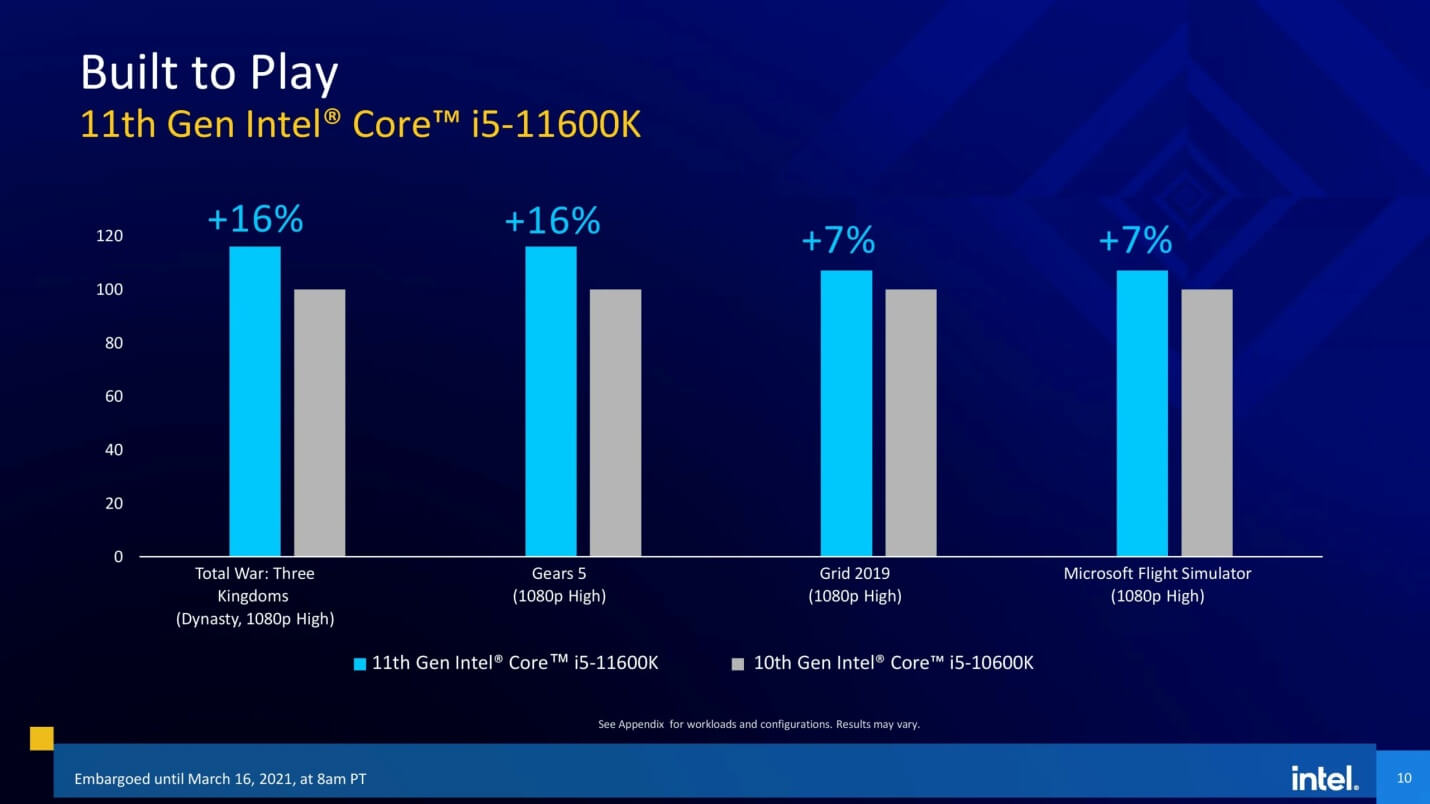 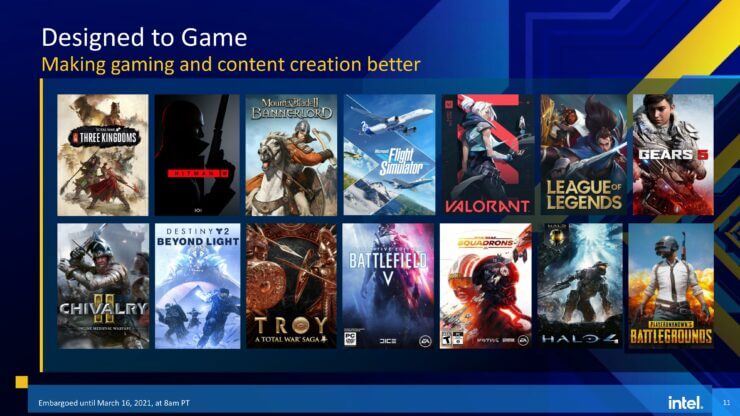 Lastly, Intel also shared details about its new 500-series chipset motherboard compatibility. The Z590 chipset is the flagship part, but the company is offering backwards compatibility with Z490 as well with a bios upgrade. 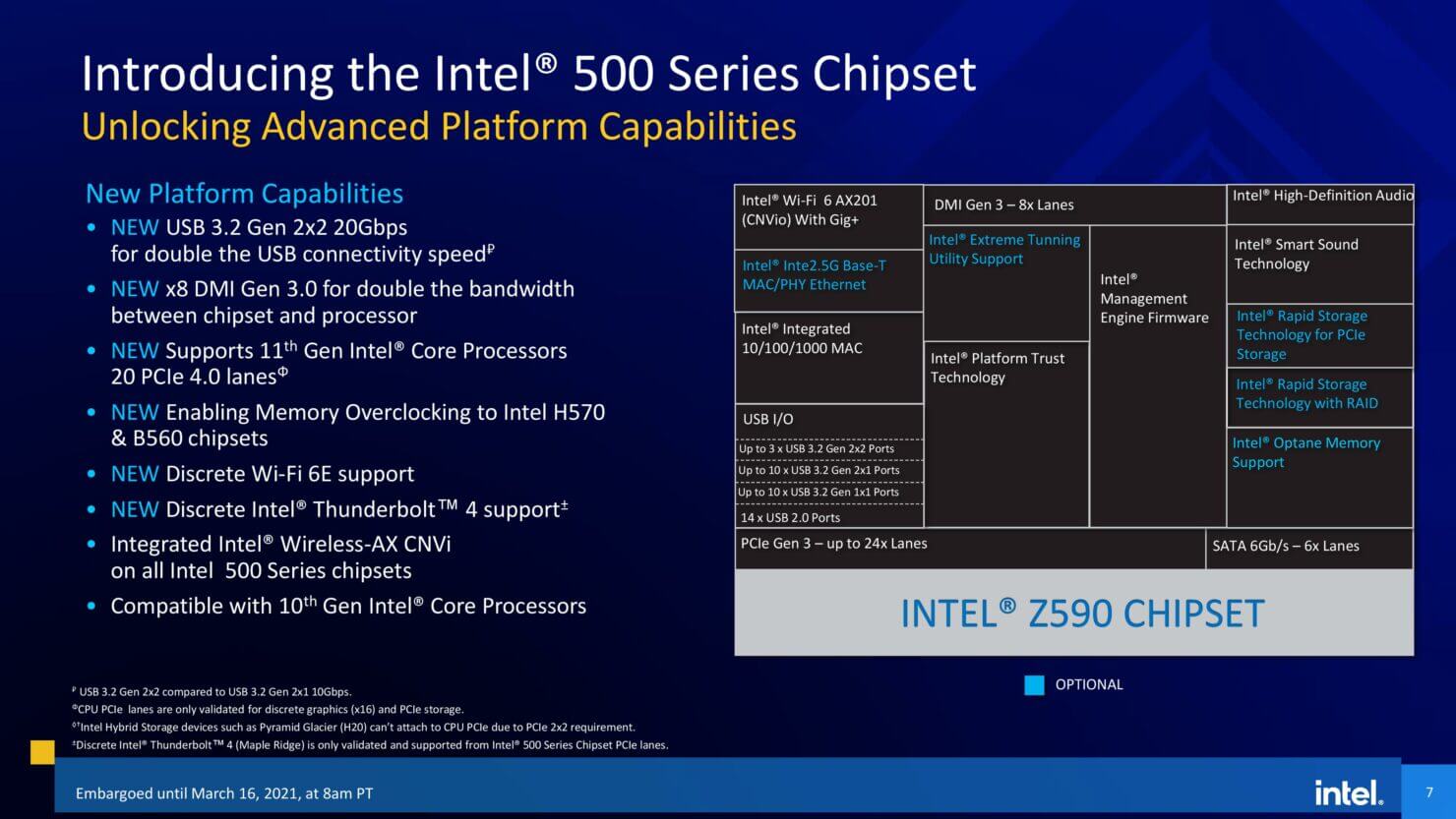 Intel has now enabled memory overclocking on its B560 and H570 chipsets, and that will work with any chip that is compatible with the platform, meaning all 10th-Gen Comet Lake, 11th-Gen Rocket Lake, and 11th-Gen Comet Lake refresh processors.

Intel is also adding support for Resizable Bar on all 500-series chipsets, provided the discrete GPU has a driver that supports the feature.

Intel also widened the DMI 3.0 connection (the pathway that connects the CPU and chipset) from four lanes to eight, doubling throughput up to a theoretical 7.86 GB/s. 500-series chipset only supports 24 lanes of PCIe 3.0 connectivity, not PCIe 4.0.

On Reddit INTEL has just announced that some select CPUs in the “Rocket Lake-S” lineup will also feature a new technology dubbed as “Adaptive Boost”. One official Intel slide has been shared which highlights this new tech feature.

Though, this doesn’t come as a surprise since some motherboard vendors have already added support for this feature in their latest BIOS microcode. We already know about the Thermal Velocity Boost (TVB) feature from Intel.

But Adaptive Boost is a new option to adjust the clock speeds. Adaptive Boost technique will be available only on select Rocket Lake CPUs, like the Core i9 K-series and Core i9 KF-series, respectively.

Adaptive Boost Technology (ABT) will be applied to all cores if the power supply and cooling conditions are met. This will work within the specifications, and will NOT be considered as “overclocking”. Adaptive Boost will take advantage of the existing thermal and power headroom available in the system. 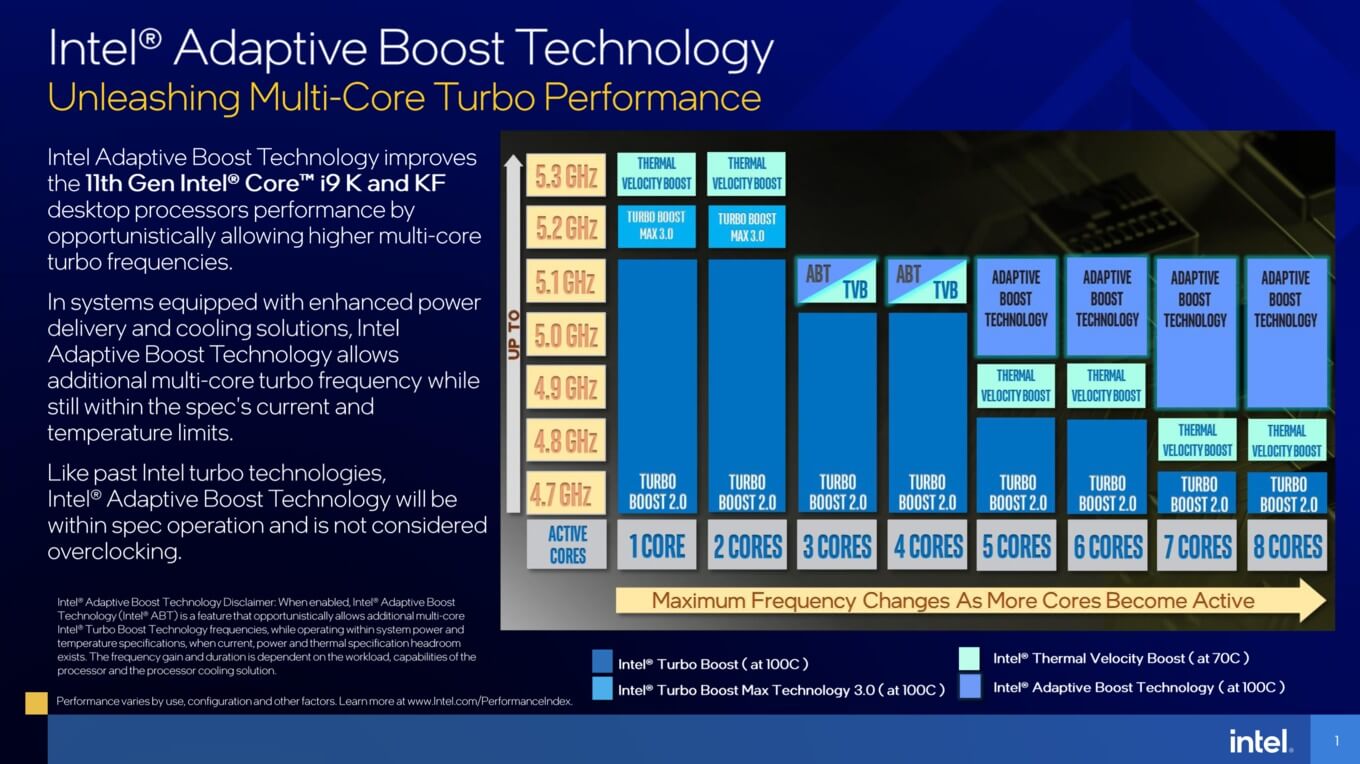 TVB only works up to 70C temp value, whereas Adaptive Boost will work up to 100C with 3 to 8 cores. So Adaptive boost might offer up to 5.1 GHz clock speed, and if the power and temperature requirements are met, then all cores can boost up to 5.1 GHz, which is 300 MHz above the official specs.