Dell, Acer, and ASUS are the initial launch partners, planning to debut the chip on their Inspiron 15 7000, Swift 3x, and VivoBook TP470 notebooks, respectively.

It basically helps with dynamic power sharing between the CPU (with the integrated Iris Xe graphics) and the discrete Iris Xe Max GPU.

With Deep Link’s Dynamic Power Share feature, Intel said it can divert all power and thermal resources to the CPU when Iris Xe Max is idle, which it said can result in 20 percent better CPU performance for video encoding versus an 11th-gen Core i7 laptop with Nvidia’s GeForce MX350 discrete graphics.

Unfortunately, the Deep Link feature isn’t available for PC gaming. So you won’t be able to run the equivalent of a mini SLI setup on your laptop. Though, Intel isn’t doing multi-GPU in any form right now. 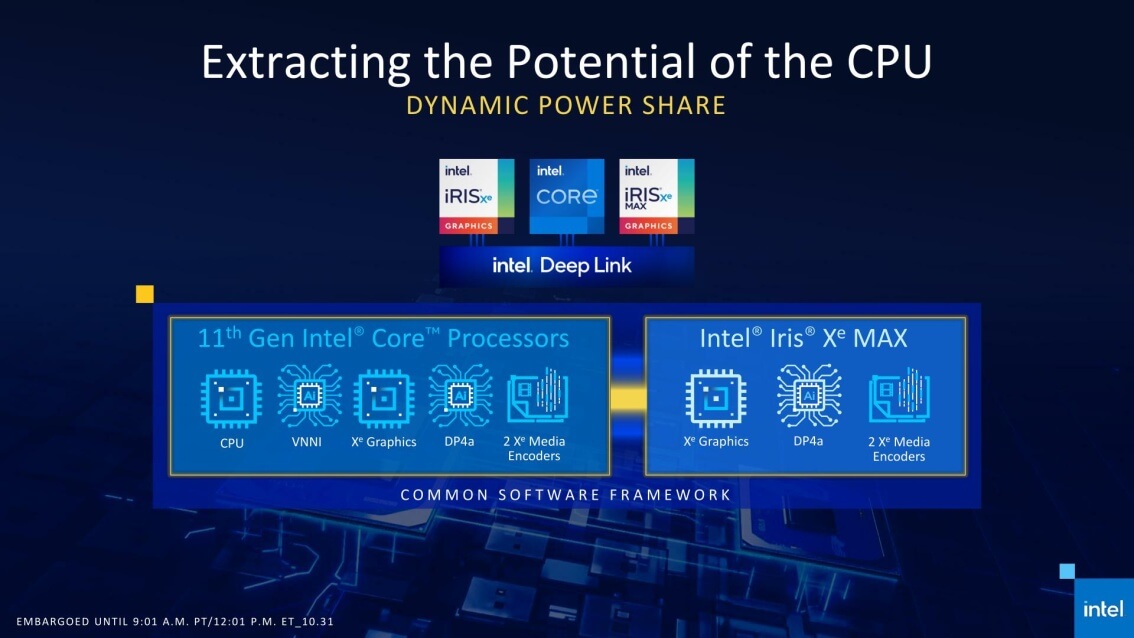 According to Intel’s benchmarks, the Xe MAX GPU combined with an iGPU beats out an NVIDIA MX350 in graphics, gaming and AI-specific workloads. Previously codenamed as DG1, the Xe MAX chip has 96 EUs, and a frequency of up to 1.65GHz.

It also features an LPDDR4X dedicated memory interface with 4 GB of memory at 68 GB/s of bandwidth, and uses PCI-Express 4.0 x4 to talk to the processor. Xe Max uses a 128-bit interface with the lower power memory to ultimately end up with more bandwidth than competing solutions like Nvidia’s GeForce MX350.

More details on this Xe MAX GPU and the new platform features can be found here. There are a lot of things to cover, but we are mainly interested in the gaming performance of this new Laptop discrete chip. 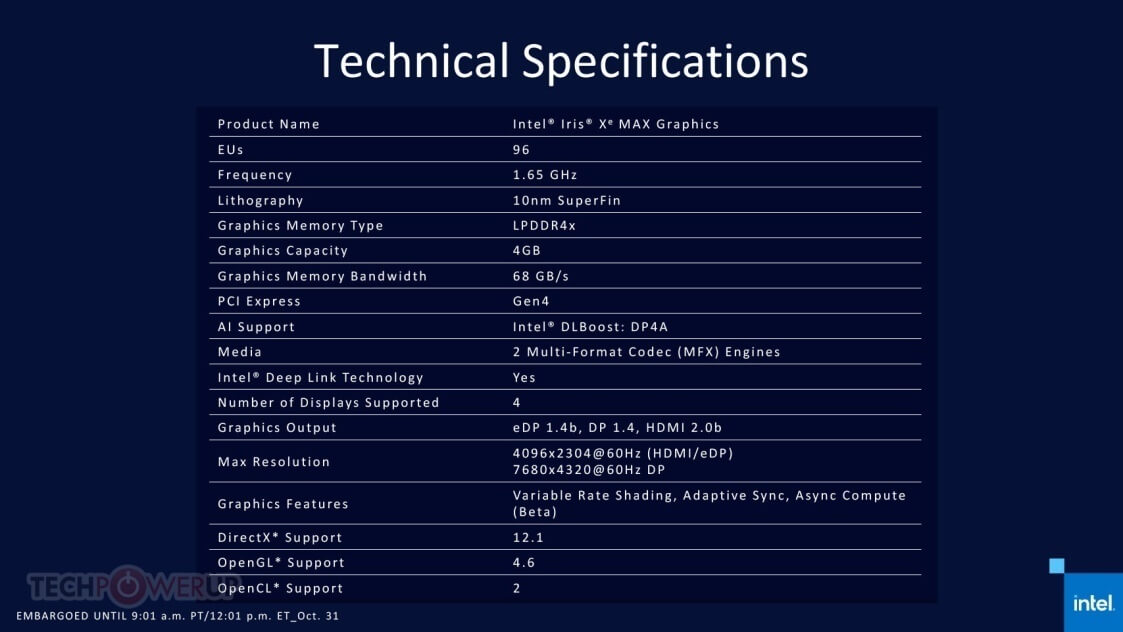 The two games where Iris Xe Max had the biggest lead was Metro Exodus, with over 40 frames per second, and GRID 2019, with over 45. However, Intel said, there are some situations where the Iris Xe integrated graphics of an 11th-gen Core processor can provide faster gaming performance than the Iris Xe Max discrete graphics.

The company said this is typically due to latency issues related to traversing the PCIe bus, among other things.

“With a common software framework, we can identify whether games will perform better on the processor‘s Iris Xe graphics or the Iris Xe MAX graphics and match them to the IP that will deliver the best experience,” an Intel spokesperson said. “With our continued investment in integrated graphics, we see this as a capability that will continue to evolve as we match the best experience to the right IP.”

Moreover, Intel revealed the Iris Xe Max may not necessarily render a PC game better than the integrated graphics on a Tiger Lake chip. It depends on the game. “This is really because of preferences in games about how they like to access memory, or latencies across PCI Express buses,” said John Webb, Intel’s director of client graphics marketing.

While Intel is not enabling multi-GPU on the Iris Xe MAX, it should be noted that even NVIDIA is distancing itself from multi-GPU configurations. The new GPU is positioned for casual/light gaming and Intel did share some internal gaming benchmarks on the Iris Xe MAX.

Intel is targeting the 1080p mainstream gaming segment with the Iris Xe MAX offering over 30 FPS in AAA games at 1080p. It also appears that Intel has tried not to cherry-pick benchmarks this time.

Most of the e-sports titles should also be playable at over 45 FPS at 1080p. Intel is also working on a new technology dubbed as “Game Boost” which might help with overall gaming performance. The Xe LP architecture also features DirectX 12 support, including Variable Rate Shading (tier-1).

As mentioned before, the company claims that the Iris Xe Max’s discrete GPU tech generally matches or outperforms Nvidia’s offering on light 1080p gaming in a selection of titles. But do make a note that Intel isn’t marketing Iris Xe Max as a gaming chip, but is claiming you can get solid 1080p performance versus an MX350.

In the chart below, we can see Xe MAX GPU offering better performance in games like Shadow of the Tomb Raider, The Witcher 3, Middle Earth: Shadow of War, Hitman 2, Metro Exodus and Grid 2019, though the MX350 beats/matches Intel’s offering in Borderlands 3 and Gears Tactics.

We don’t see any of the popular eSports titles such as League of Legends, CSGO and Valorant in the chart, so we’ll have to wait for real-world benchmarks for those games. 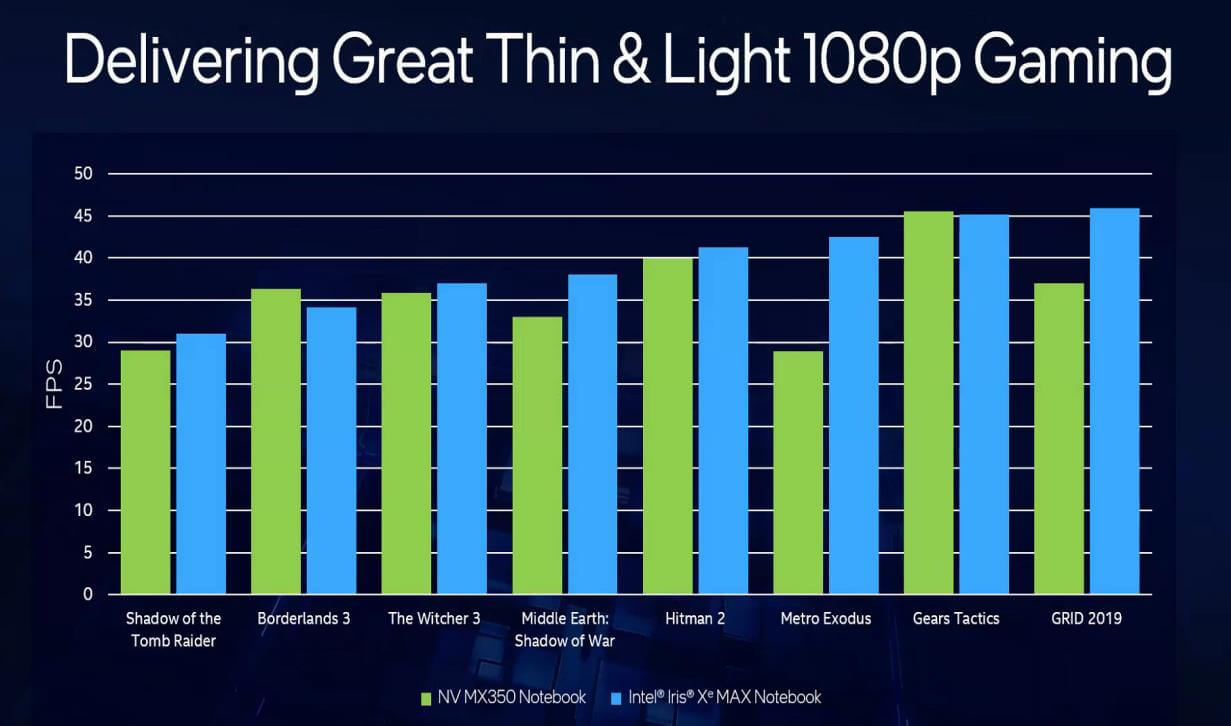 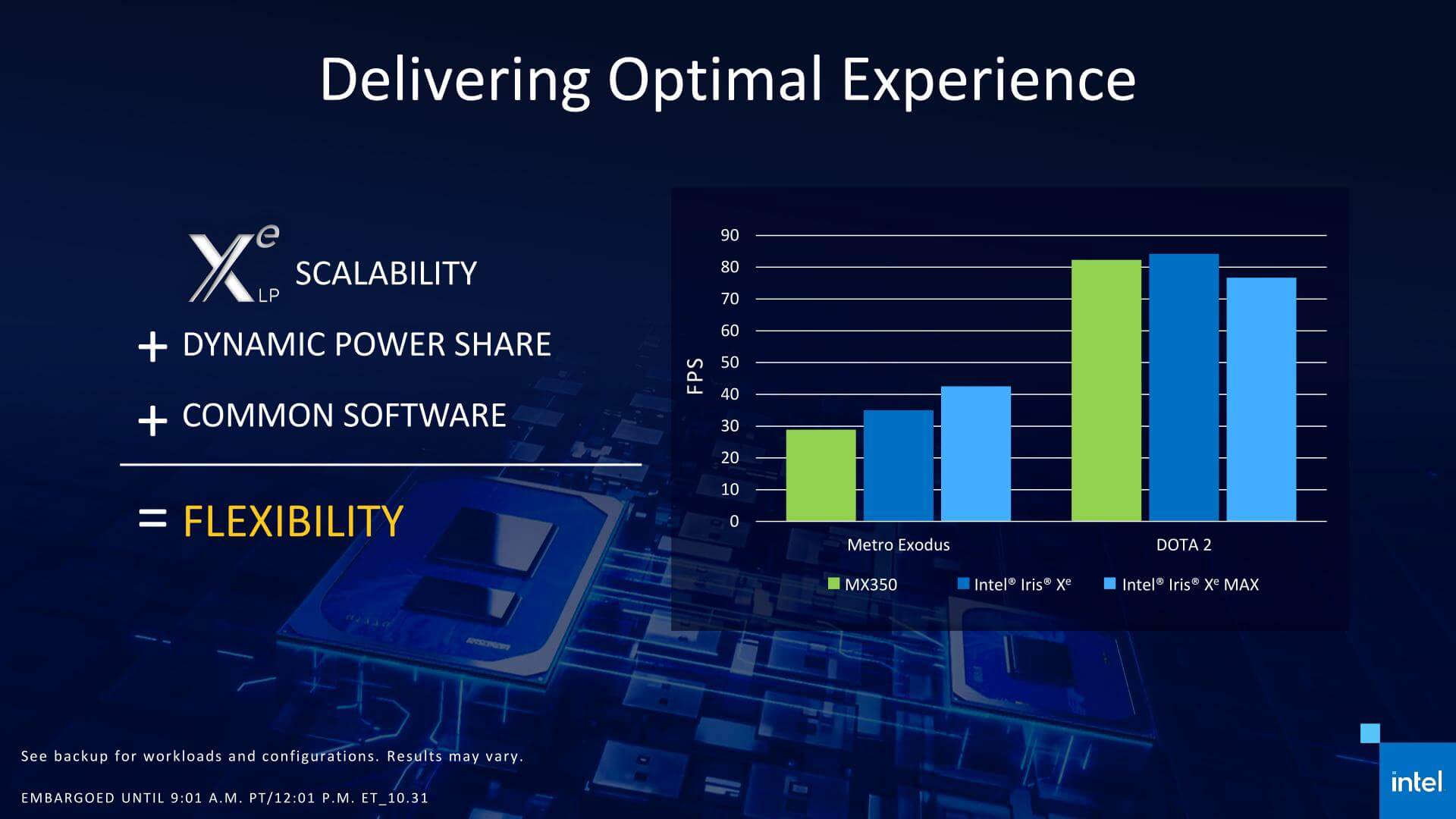 Interestingly, as you can see from the above slide, while the Iris Xe Max beat the Iris Xe in Metro Exodus, both the integrated graphics and MX350 were faster in DOTA 2.

This may seem a bit odd/abnormal, in that the higher clocked GPU without shared RAM should generally deliver higher frame rates. But Intel said it will test games and have a list in the Intel Graphics Command Center to ensure the best-performing GPU is used.

Xe MAX appears to be the first entry-level gaming solution from Intel in years, and it can easily achieve 30+ fps on most AAA titles on low-medium settings.