INTEL recently launched their Comet Lake-S series of desktop processors. A lot of questions have been raised with regards to the thermal output and performance of these processors, especially when they are running at the advertised and claimed base/boost clock speeds by INTEL.

Given the Core i9’s 250W peak power draw at stock settings (variable PL2), boosting heat transfer efficiency with the die is very important, especially if you are into “overclocking”, or you are a serious “hardcore” gamer.

With Comet Lake INTEL has made some minor design changes, when it comes to engineering, and with that the company is taking a new approach to manage the thermals. INTEL actually cramped more CPU cores with the entire Comet Lake lineup, but at a very high thermal cost.

Intel already moved from pTIM (polymer TIM, or thermal grease) with its Coffee Lake K-series processors to Solder TIM.  STIM actually helps with the heat transfer between the die and heat spreader, while it can also lower the operating temperature. Lower temperatures can help during the CPU’s stock operation, enabling longer turbo boost durations.

With up to 10 cores now under the integrated heat spreader (IHS), Intel has decided to further bolster this approach by using a “thinner die” for the K-series Comet Lake CPUs.

But why did INTEL make the die and STIM thinner, and the heat spreader thicker ? It’s because of cost. Intel decided to keep the height of the heat spreader on all of its CPUs the same so that they’d be compatible with the existing CPU coolers. As per Intel these new processors are now better at power dissipation.

” One of the changes Intel made with Comet Lake S is that they thinned out the die. In other words, there is now less silicon on the die interfacing the actual “transistors” with the soldered integrated heat sink. Intel claims that this helps improves the thermal conductivity, allowing heat to better escape the whole package “.

The company is now lapping its own die to reduce the amount of insulative material between the transistors and the TIM. At the same time, Intel has also increased the amount of copper in its IHS to improve its thermal conductivity and performance. The reason to have a slightly thicker IHS is to keep the “Z-height” identical to allow for coolers to be re-used.

The overall Z-height of the of the CPU and IHS remains the same, but the actual silicon is being thinned on the die itself. This allowed the copper to be thickened on the IHS.  Intel calls this new processor technology “Thin Die Solder Thermal Interface Material” (Thin Die STIM) and it will be used and supported on select 10’th Gen Comet lake S SKUs.

To maintain the “Z-height” dimensions, it makes sense to thicken the IHS (think of this as of how compatibility can be enabled between LGA 115x coolers and the LGA 1200 socket interface).

Intel has made this clear that it uses the ‘die-thinning’ technique on the K-series models, but there is no word on the rest of the Comet Lake-S CPU lineup. With Comet Lake, Intel created a “thin die”, and at the same time also increased the thickness of the IHS to compensate for this change.

They are allowing the heat to transfer from the Comet Lake CPU cores to the CPU coolers, which will allow the heat to move away from the CPU cores at a much faster rate. This should help with lower thermals and heat output. But it remains to been whether such design changes from INTEL can really help cool the i9-10900K, and other high-end Comet Lake processors. 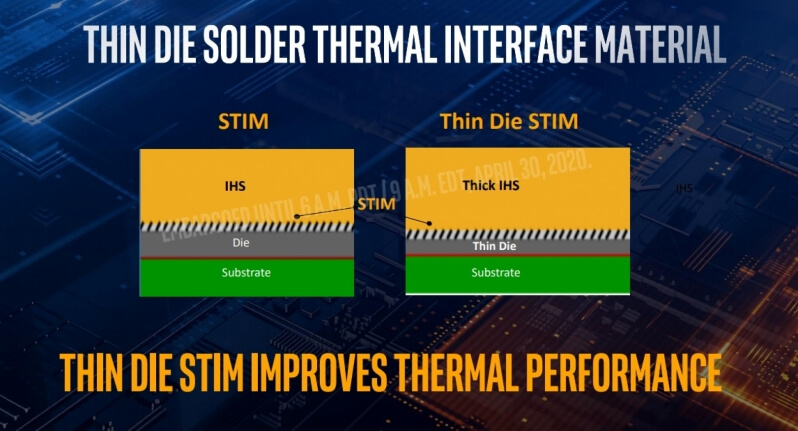