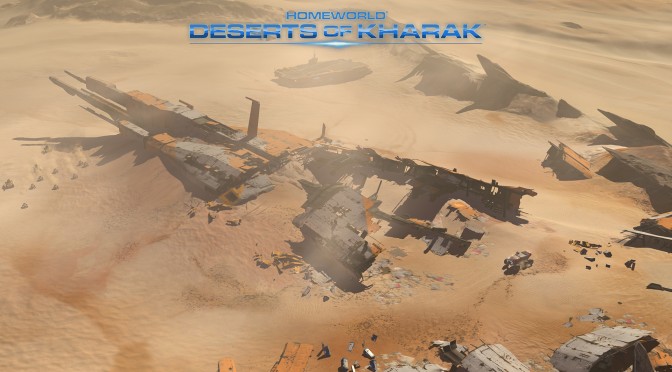 As the press release reads, Homeworld: Deserts of Kharak is the story of a dying planet and a perilous expedition to save it.

“Take control of Rachel S’jet, chief science officer, as she leads a fleet of coalition forces deep into enemy territory in search of the ‘primary anomaly’; Kharak slowly seeps into arid ruin, but if rumors are to be believed, there might still be salvation lying in wait.”

“Along with Gearbox Software, we are thrilled to be breathing new life into the Homeworld franchise, something we are obviously very passionate about. We think fans will love experiencing how the Homeworld story began with Deserts of Kharak.”

“Backing Rob and the team at Blackbird Interactive so that we all could experience an authentic and passionately developed new entry to the Homeworld saga has been a thrill. When you play Homeworld: Deserts of Kharak I am confident you will feel and appreciate the Blackbird Interactive team’s commitment to the real-time-strategy genre as well as their reverence for the very franchise many of them helped to create as part of the original Homeworld development team.”

The game is now available for purchase on Steam for $49.99.

Here are the key features of Homeworld: Deserts of Kharak: