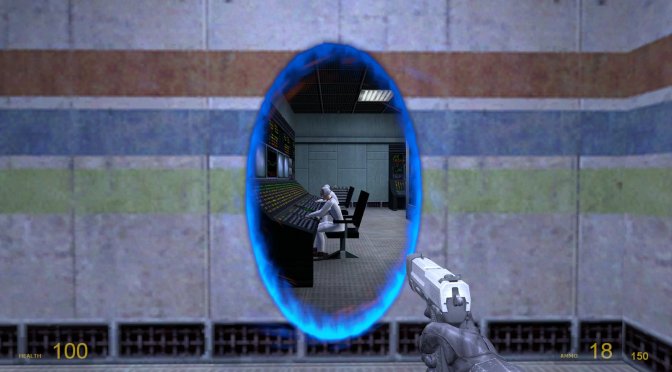 Half-Life and Portal fans, here is something special for you today. Modder ‘NOAHakaVOSEN’ has finally released Version 1.0 for his Portal Mod for Half-Life Source. As its title suggests, Half-Life: Source – Portal Edition adds the Portal gun to Half-Life: Source.

What this means is that you will be able to play the whole Half-Life: Source single-player campaign with the Portal Gun. Moreover, all of the features from Portal appear to be working great in Half-Life: Source.

In order to install this mod, you’ll need Half-Life 2 and Source SDK Base 2007. Once you have installed them, you’ll have to download the “hl1_portal.rar” archive from here. Then, you’ll have to open it and extract its folder to your “sourcemods” directory. Quit and restart Steam, and you should see “Half-Life: Source – Portal Edition” in your Library.

To celebrate the launch of this mod, NOAHakaVOSEN has also released the following gameplay video. This video will give you an idea of what you can expect from it, so be sure to watch it.