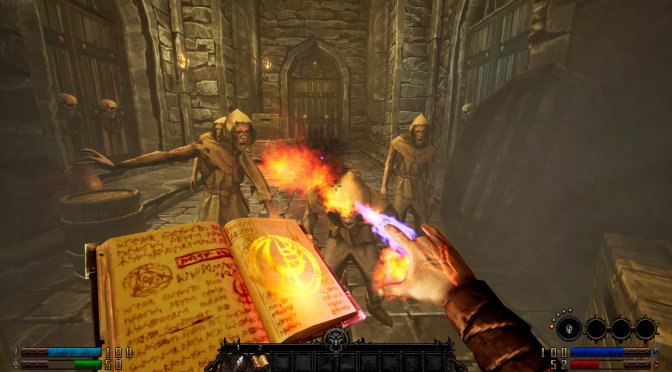 1C Entertainment and 3D Realms have announced a spiritual successor to Hexen 2, GRAVEN. In order to celebrate this announcement, the publishers released two trailers, as well as a 30-minute gameplay walkthrough video.

GRAVEN is an action RPG that will blend action, exploration and puzzle-solving. In this game, players will hunt down the foul heretical sects responsible for conjuring plagues and twisting the natural order of the seasons. Players will journey across three expansive, open-ended regions, and scour the lands to purge evil.

Additionally, players can carefully observe a reactive world to find their way with a journal. Players can also listen to townsfolks’ woes and slay the monsters responsible for their torment. Furthermore, players will solve environmental puzzles and banish over thirty distinct enemies, from plagued madmen to swamp beasts with powerful sorceries such as wild blasts of lightning and scorching rays of flame.

The game will also offer destructive conventional weaponry, including magic staves and wrist-mounted crossbows. Players can find hidden gold to upgrade weapons and spells at blacksmiths and alchemists. They will also upgrade their character with new abilities to uncover secrets and entirely new areas. GRAVEN will feature over 30 weapons and spells, encourages experimentation.

“GRAVEN began as a game we had often dreamed of. What would a spiritual successor to a Dark Fantasy series such as Hexen, have looked like if it was made in 1998 in the original Unreal engine?’ We think the answer is GRAVEN. We hope you do too.”

GRAVEN is coming to the PC in 2021. The game will also feature solo, split-screen co-op, and online with up to four players!