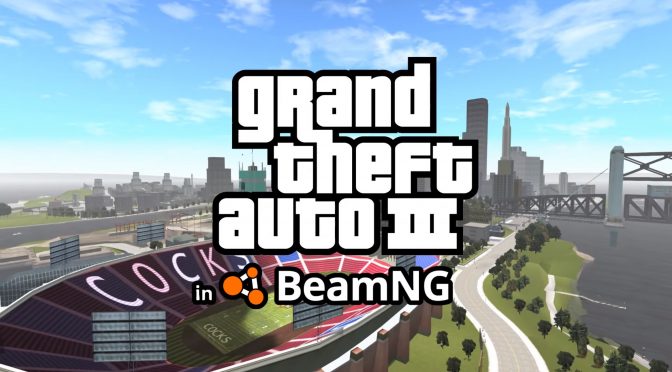 Now here is a mod that every owner of BeamNG must download. Modder ‘swift502’ has ported Liberty City from Grand Theft Auto 3 into BeamNG, allowing you to drive and crash your vehicles in that classic 3D city.

BeamNG.drive is as an immersive vehicle simulator offering near limitless possibilities to explore driving, stunting, crashing, and customizing vehicles. This project features amazing soft-body physics and car deformation effects, and this city mod is a must-have for everyone.

Do note that this mod is still under development. According to the modder, there are some glitches such as noticable LOD pop-in, slits/gaps in the ground between two map areas, lamp and fire hydrant placement is off sometimes, water doesn’t behave like water and some buildings don’t have roofs (resulting in some strange shadows).

Those interested can download the mod from here. As the modder claimed, this GTA3 Liberty City mod needs to be installed manually as it contains copyrighted material (thus it cannot be distributed through the official mod repository).

I also suggest downloading it as soon as possible because Take Two may take it down (after all, this mod is basically bringing the game’s entire city to a completely different game/engine).

In order to showcase the mod, swift502 also released a video that you can find below. As you can see, there haven’t been any visual changes or improvements to Liberty City (it looks exactly the same it was in Grand Theft Auto 3). This isn’t meant to be a remake of Liberty City so don’t expect modern-day visuals. Still, it’s a cool concept that some of you may find interesting.