Violator has released a new version for his FXAA Injector tool; a tool that can be used in most modern-day games as a means of overhauling their visuals. In case you were unaware of, this tool injects different post processing methods to games like Anti Aliasing, Sharpening, Bloom, and Color Tones. This is a great alternative to the SweetFX Shader Suite, and you can find below a link for its latest version.

According to Violator, with this new version players can import/export game profiles, add games to the game list, there is no more any need to place the app in each game folder (awesome feature), change the path of a game added to the list in case the game uses an exe in a sub directory, and much more. 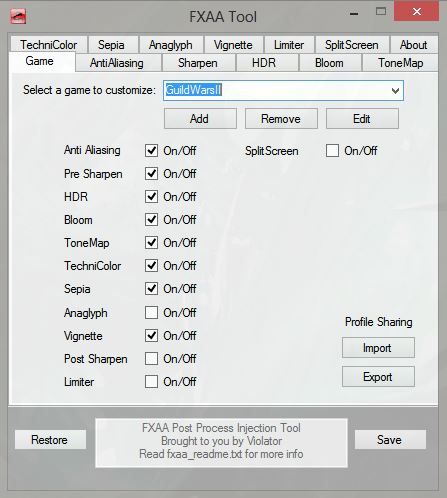 We should note that the FXAA Injector Tool supports only DirectX9 titles. DirectX10/11 support will be added together with the integration of SweetFX. DirectX8 to 9 conversion is supported with the added ENB files.