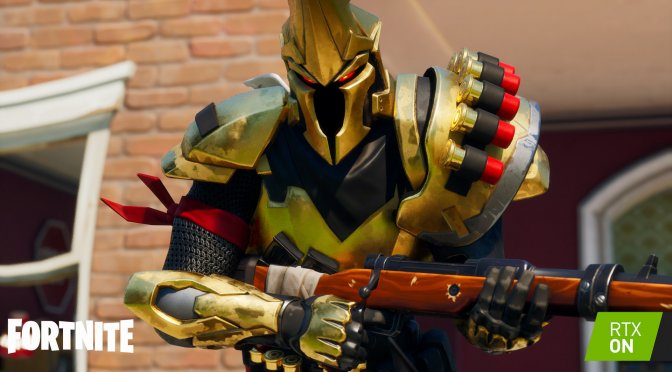 Earlier this month, NVIDIA revealed that Fortnite will add support for both DLSS 2.0 and Ray Tracing. And today, the green team announced that Epic Games will release this highly anticipated RTX Update for Fortnite on September 17th. Furthermore, the green team plans to release a new GeForce Game Ready Driver on the very same day.

Going into more details, the RTX Update for Fortnite will enhance the game’s shadows, reflections, ambient occlusion and global illumination.

Ray-Traced Reflections. This setting adds beautiful, realistic, super accurate reflections to bodies of water and other suitably reflective surfaces in Fortnite. See game detail, characters, enemies, weapon effects, and more, perfectly reflected throughout the world. And experience improved lighting, as light sources and other illumination will be accurately reflected onto nearby surfaces and objects, making gameplay look and feel even more dynamic.

Ray-Traced Shadows. With ray tracing enabled, Fortnite’s dynamic shadows get a significant upgrade, enabling them to realistically stretch across the scene, with accurate softening as the distance from the shadow source increases. Particularly of note is the enhanced resolution of Ray-Traced Shadows. You can see this clearly in fine detail shadows, such as those created by chain link fences. Furthermore, Ray-Traced Shadows dynamically update as the time of day changes, with effectively infinite precision.

You can find some comparison screenshots between RTX and the vanilla version on NVIDIA’s website!