SuperData Arcade has shared its monthly report, claiming that Fortnite generated $223 million across all platforms (console, PC, Mobile) in March, up a whopping 73% from February. In addition, Superdata predicts that Far Cry 5 sold around 2.5 million digital units across console and PC.

Regarding Sea of Thieves, Superdata states that there were 1.7 million monthly active users on console and 283,000 on PC during the game’s launch month. However, it appears that half of these users obtained the game through the limited free trial that was part of Microsoft’s Xbox Game Pass.

Here are the key points of Superdata’s report:

Fortnite, Fortnite, Fortnite. There’s no other way to say it: the game is a phenomenon. Fortnite generated $223 million across all platforms (console, PC, Mobile) in March, up a whopping 73% from February. Drake, a new season of the Battle Pass, and a John Wick skin all contributed to the massive growth.

Far Cry 5 marks a strong return for the franchise. Ubisoft’s Far Cry 5 sold an estimated 2.5 million digital units across console and PC. On console, Far Cry 5‘s digital launch was up nearly 500% compared to Far Cry Primal two years ago. This points to not only the underlying health of the Far Cry series, but also to growing digital download rates for AAA console games in 2018.

Sea of Thieves has early success but with a caveat. Sea of Thieves had 1.7 million monthly active users on console and 283,000 on PC during its launch month. However – more than half of these users obtained the game through the limited free trial offered as part of Microsoft’s Xbox Game Pass. This leaves some unanswered questions concerning the long-term success of the title.

Superdata has also shared the world’s most popular digital games across PC, console and mobile. 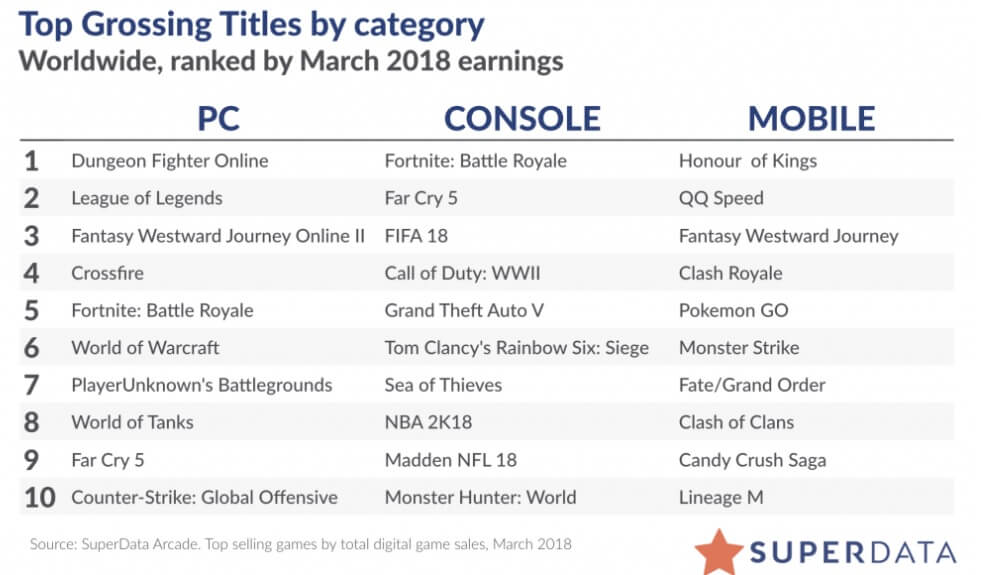