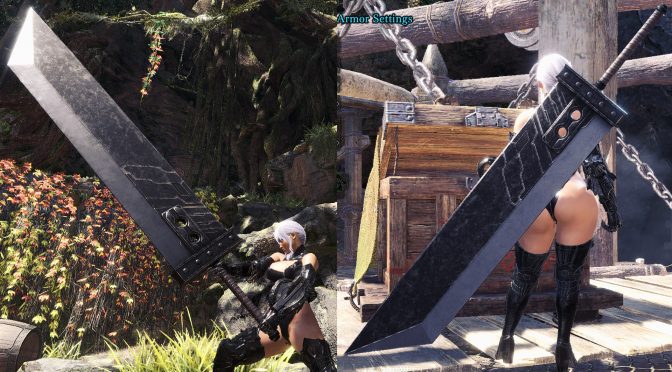 While Final Fantasy 7 Remake has not been released – and to be honest I don’t expect it to come out anytime soon – Final Fantasy fans can now use Cloud’s Buster Sword in Monster Hunter World. Created by modder ‘UberGrainy’, this new Buster Sword will replace other weapons and will let you use Cloud’s iconic sword.

The modder used DemonZariche and DoubleBrewski’s Oblivion/Skyrim Buster Sword model as a base (completely remapped and retextured), and the handle texture is from Phate3’s Dragonslayer. The blade length is slightly shorter than it should be, so that it doesn’t clip through the floor, and some parts still shine as if round when they should be flat, but they’re not that noticeable and he was close to the polygon limit of the sword.

All you have to do is download the mod from here and choose which folders you wish to extract. All files and folders must be placed at “Steam\Steamapps\common\Monster Hunter World\”.