Electronic Arts today announced the beginning of an extensive and exclusive creative collaboration between Katy Perry, one of today’s biggest superstars, and The Sims, one of the most popular gaming series of all-time. In collaboration with Perry, the world-renowned The Sims Studio plans to develop multiple games within The Sims franchise featuring special Katy Perry themed in-game content and virtual goods. The relationship kicks off with a special Collector’s Edition for The Sims 3 Showtime, launching in March 2012. Katy Perry will also be featured in all-new advertising and marketing campaigns for the brand.

“Today marks the start of the most integrated and exciting collaboration with any artist in the history of The Sims. Katy Perry has been a fan of The Sims for several years, and her Simlish recording of her hit ‘Hot and Cold’ featured in The Sims 2 series quickly became the most popular Simlish music video to date. We couldn’t be more excited to work with Katy and bring her distinctive talents, style and personality to the franchise’s global fan base. No performer could better represent the humor and fun of The Sims brand.”

“I love how you’re able to play out different stories through your Sims characters – giving them different careers and watching them succeed. It’s cool to see the Sims’ stage performances in The Sims 3 Showtime decked out just like my California Dreams Tour – even my cotton candy video screens are in there! I always like to think of myself as a cartoon, and now I’m a Sim!”

Katy Perry became the first artist in history to spend 52 consecutive weeks in the top 10 of the Billboard Hot 100. Perry’s Teenage Dream produced five #1 hits, an accomplishment equal only to Michael Jackson’s Bad album and making her the only female artist in history to achieve this feat.

Katy Perry will work closely with The Sims Studio to create accessories, clothing, hairstyles, furniture and props in The Sims games that truly celebrate the imagination that she brings to her performances, music videos and life. Katy Perry will also be featured throughout The Sims television advertising campaigns, online communications and retail marketing around the world.

In The Sims 3 Showtime, the latest expansion pack to the critically-acclaimed The Sims 3, players can venture into a new world and play out a rags-to-riches story with their Sims as they become superstar singers, acrobats and magicians, or even moonlight as a DJ. Players can watch their Sims rise to fame – or go down in flames – as they perform on stage in front of cheering crowds in all new venues. On the way to the top, players will have more tools to tell their Sims’ stories the way they want to including the ability to customize stages, create Sims with all-new clothing options, traits, skills and lifetime wishes and interact with objects like the new pool table, karaoke machine and mechanical bull.

New connected features allow players the opportunity to share their big moments and connect with friends and fans of The Sims like never before. Using the all-new optional SimPort feature, players can send their Sim on tour to perform in their friend’s world. Along the way, players can earn achievements for accomplishing special challenges that will be rewarded with new badges and that can be viewed and shared on the new in-game player profile and wall.

In addition to the Katy Perry themed Collector’s Edition, a Limited Edition version of The Sims 3 Showtime is also available for pre-order while supplies last. When pre-ordered, these products feature the Ultimate Stage bonus venue. Players can place this fully customizable venue in their world and will be able to use it as an additional stage for their Sims to perform on, complete with in-game props, backgrounds, lights and special effects. 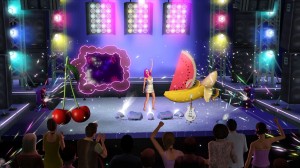 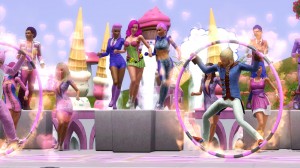 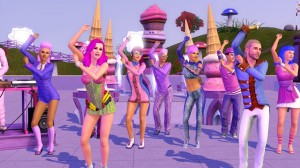 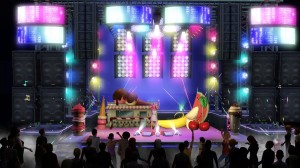 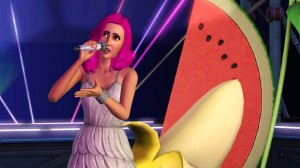