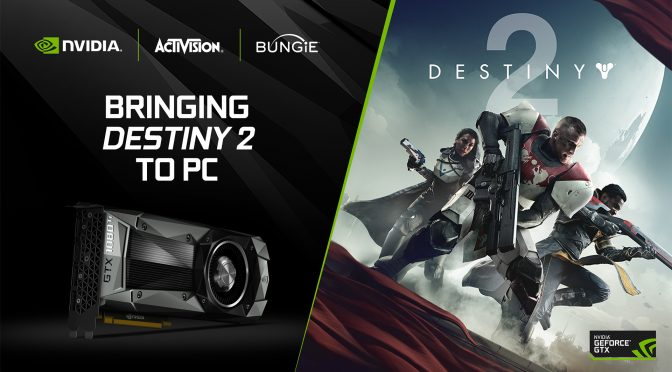 Destiny 2 PC beta requirements have been unveiled by NVIDIA. 4K @ 60FPS will be achieved if using a GTX 1080Ti.

Before players can jump into Destiny 2 on their PC’s they should check the requirements. NVIDIA have released the full PC requirements including the minimum, recommended and of course what you will need to hit that amazing 4K @ 60FPS seen in the video trailer above.

Activision, Bungie and NVIDIA have been working closely together to ensure gamers get the best possible visuals and performance with Destiny 2 on PC. The development team leveraged NVIDIA’s developer resources and advanced technologies to bolster that experience, too, with Bungie CEO Pete Parsons explaining that “the GeForce PC platform offers technologies and performance that allow gamers to see the Destiny universe the way we envisioned it for PC players.”

In order to get the optimal performance during Destiny 2‘s PC beta, you will need a GeForce GTX 660 (or GeForce GTX 1050 if you’re upgrading) to meet the minimum system requirements. However, if you want the level of visual fidelity showcased in the 4K trailer above, you’ll want to arm your rig with our obscenely fast GeForce GTX 1080 Ti.

Check out the full minimum and recommended PC system requirements below.

On top of ensuring your setup is ready to get the best possible Destiny 2 experience during the Beta, you will want to remember to download the Destiny 2 Beta Game Ready driver via GeForce Experience, which will be available before the beta goes live on August 28th.