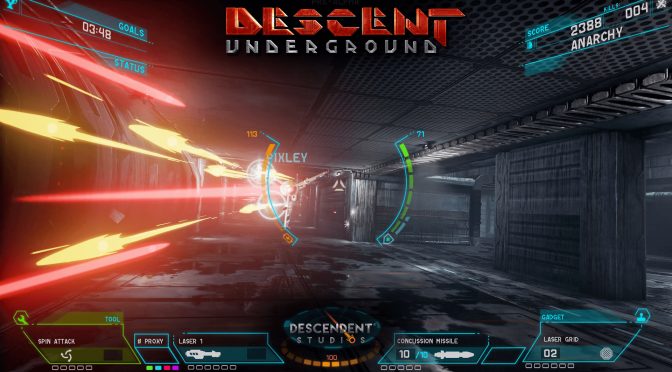 Descendent Studios released an exclusive free demo download of its upcoming game Descent: Underground, a reboot of the classic full-freedom shooter, Descent. The developers partnered with BrightLocker, makers of an innovative new platform for game discovery, community interaction and funding that bridges the connection between game developers and players in ways not seen before in the industry.

“We believe strongly that the future of gaming is developers connecting directly with gamers. We are super excited to offer this first free taste of Descent’s future through a great community like BrightLocker.”

This multiplayer demo is available only on BrightLocker.com for a limited time. Players can try out all of the multiplayer competitive and cooperative game modes, among them a hoard-style “Corporate War” team mode, a challenging “Survival” mode, and a tongue-in-cheek capture-the-flag mode called “Miner Mayhem”. Single-player “Survival” and “Vs. Bots” modes allow practice play in advance of the upcoming storyline campaign.

Descent: Underground is a new Descent game that combines first-person shooter action with six-degrees-of-freedom vehicular movement, in which players take on the role of celebrity pilots commanding combat spacecraft in high-stakes battles for control of warren-like asteroid mines.