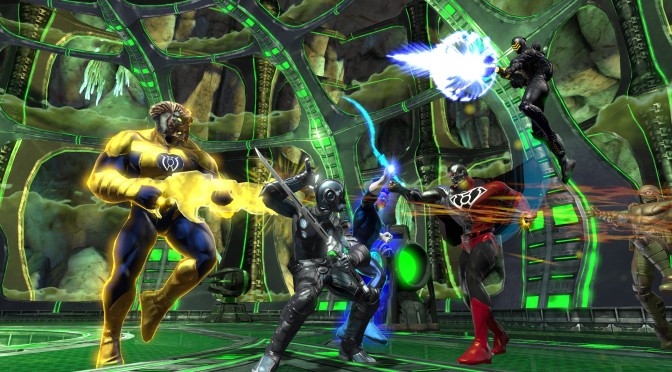 As the press release reads, the intense multiplayer action in War of the Light Part I centers on a brand-new storyline inspired by DC Comics’ vast Lantern lore and takes place in a re-envisioned Metropolis featuring nearby planets Mogo, the sentient Green Lantern Planet, and Ranx, the Sentient Sinestro Corps City.

Players are introduced to Saint Walker and the Blue Lantern Corps in War of the Light Part I, and can expect to see additional Corps in future DLCs. Additionally, players now have access to Rage Powers and new Legends PvP characters – Saint Walker and Atrocitus.

“Players are getting more than just a new storyline with this DLC. We transformed Metropolis for the War of the Light trilogy and created new, expandable environments and content – separate from the original – for players to explore. In War of the Light Part I both heroes and villains can utilize Rage powers, a unique and challenging power set that offers a new tanking mechanic, adding yet another dimension to fights. It looks amazing and I’m looking forward to players mastering the Red Lantern-inspired power.”

In War of the Light Part I, Lanterns of all colors have lost connection with their Emotional Spectrum’s entities. Following cryptic evidence, four Corps – Green, Blue, Sinestro, and Red – converged on Earth, determined to find out what happened to their entities. This clash of the Lantern Corps has resulted in a new war of light, centered in Downtown Metropolis and nearby sentient planets Mogo and Ranx. Players must team up with Hal Jordan or Sinestro in high-level multiplayer adventures to investigate the strange colored mists that have descended upon Metropolis and are affecting the citizens’ emotions.

War of the Light Part I includes:

-New Rage Power – Drawing its power from the Red Light of the Emotional Spectrum, Rage can be utilized for either good or evil. Heroes and villains who wield the tank/damage power will notice its abilities have a berserker style feel.
-New 4-Player Operations – Unusual colored mists have appeared and caused a new war of light, centered in Downtown Metropolis, Mogo and Ranx. With the help of their allies, including Hal Jordan and Kyle Rayner on the hero’s side, and Hank Henshaw and Sinestro on the villain’s side, players must uncover the origin of the mysterious mists.
-New 8-Player Operation – The Green Lantern and Sinestro Corps clash while investigating the mists in this new Operation taking place on Mogo and Ranx.
-New Legends PvP Characters – War of the Light Part I introduces two new Lanterns – the violent Atrocitus and the agile Saint Walker.
-New Lantern-inspired Gear – Heroes can earn Green Lantern-inspired gear, while villains can collect gear influenced by the Sinestro Corps. Both alignments can obtain the Red Lantern styled gear.
-New Feats and Collections

DCUO’s War of the Light Part I DLC pack is a free download for the game’s Legendary members and is now available for $9.99 USD for Free and Premium players via PSN, the in-game Marketplace, or for PC players via the DCUniverseOnline.com website.

DCUO - War of the Light Part I - Trailer