It appears that Dark Souls III is doing well on the PC. According to SteamSpy‘s data, Dark Souls III has sold more than one million copies on Valve’s distribution service, Steam. 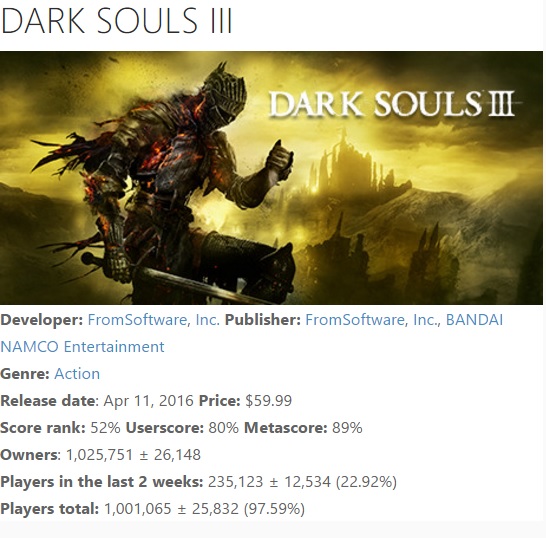 For the record, the game’s PC sales are similar to those of Dark Souls II. However, the first Dark Souls game – while being a really awful port – managed to sell double the amount of copies. Of course, keep in mind that the first Dark Souls saw some ridiculous discounts (at one point it was offered for only $4).

Compared to its predecessors, the PC version of Dark Souls III was polished enough to justify our recommendation. As we wrote in our PC Performance Analysis:

“Dark Souls III is a really polished product. Its biggest flaw is the lack of on-screen indicators for the keyboard. Once you figure out the right keys, however, you are in for an amazing experience. The game runs with constant 60fps on GPUs that are equivalent to NVIDIA’s GTX690, does not suffer from mouse smoothing/acceleration issues, and requires a quad-core modern-day CPU in order to push constant 60fps.”