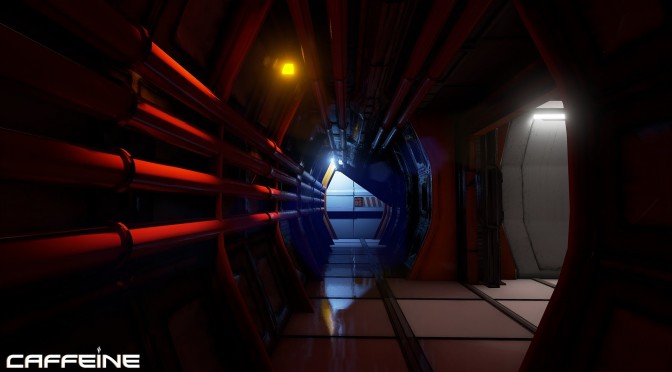 Dylan Browney has informed about a new demo for his sci-fi horror title, Caffeine. This new demo packs many improvements, bug fixes and features, and is based upon the short demo that was shown at AVCon 2014 in Adelaide, Australia.

As with the previous demo, it mainly serves as both a visual showcase and an example of what to expect in terms of atmosphere, music and setting.

And here is the changelog:

-Based on the demo shown at AVCon 2014. (Unreal Engine 4.3 Base)
-The demo level is now non-linear (explore how ever you wish!)
-Physics based interaction (Hold right-click on a coffee cup and various other objects such as mobile lights.)
-Implemented head bobbing and crouching (This is an early implementation, don’t be surprised if there are a few bugs.)
-Level has been heavily rebuilt with new assets(No longer old UE3 assets.)
-Materials have been heavily tweaked. (Most textures are now at 4K and 8K resolution.)
-Oculus DK2 head tracking **should** work (With the 3.2 camera drivers from Oculus SDK website, won’t need these for next release.)

-You can not yet swim! Deep water results in a level reset for now.
-Inventory system.
-More puzzles.