During the Electronic Arts Q3 FY 2021 earnings call with analysts, CEO Andrew Wilson shared some details on the next Battlefield entry, and revealed that the new game is coming this Holiday 2021. Andrew Wilson has promised the biggest Battlefield experience to date.

The game is expected to have the largest battles we’ve ever seen in the series and even more options to suit your playstyle and gameplay.

First off, Battlefield 6 is going to feature fully destructible buildings. According to the info shared by Tom, BF6 is going to have Levolution “on steroids.” What this basically means is that you can destroy almost every building in the game, except for ones that are important for completion of the main objectives.

For example, when you shoot any building with a tank, it will be damaged and eventually fall over in a certain direction. The destruction system is not just purely animated, but rather calculated instead. The game will also have a squad system with 4 people and platoons called units.

Each unit will have 3 to 4 squad members, and there will be a unit leader as well. Moreover, multiple squads can be placed in the same “unit”. The game will also feature four classes, Assault, Engineer, Support, and Recon.

The leaker also claims that the game will have a free to play content, most likely a Battle Royale mode. There will also be a battle pass where each season is going to be around 8 to 10 weeks, and you can gain up to level 100. Lastly, the leaker says the game will have full cross-platform play support between PS5, Xbox Series and PC.

So just to reiterate, Battlefield 6 is set to release this holiday season on next-gen systems and PC. A full reveal is also coming sometime in spring 2021.

According to EA, Battlefield 6 or whichever name the company decides, will be bigger and larger than ever before. EA teased huge maps, more players than ever before, and next-gen console upgrades. 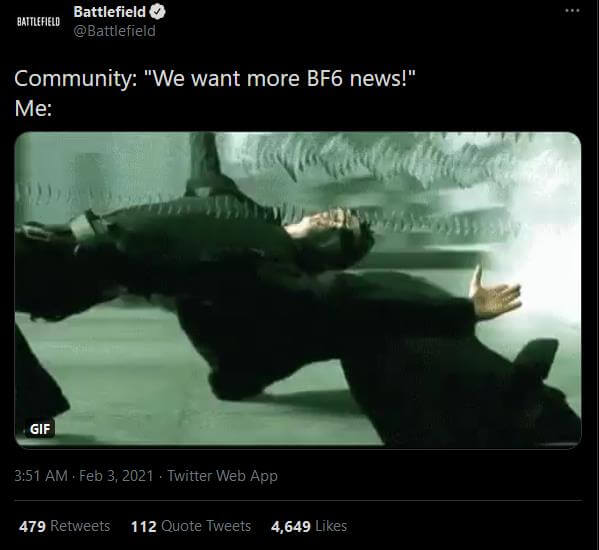