You’ve heard about Mantle and how it will boost the performance of AMD’s cards on Battlefield 4, right? Well, today we get a glimpse of what we can expect from that low-level API. According to AMD, Battlefield 4’s demo (at its recent AMD event) was running on a single R9 290X card at 5760x1080 (though it has not been confirmed whether it was running with constant 60fps. We should note that we did not notice any slowdowns, so we are most probably looking at a 60fps gameplay heaven). 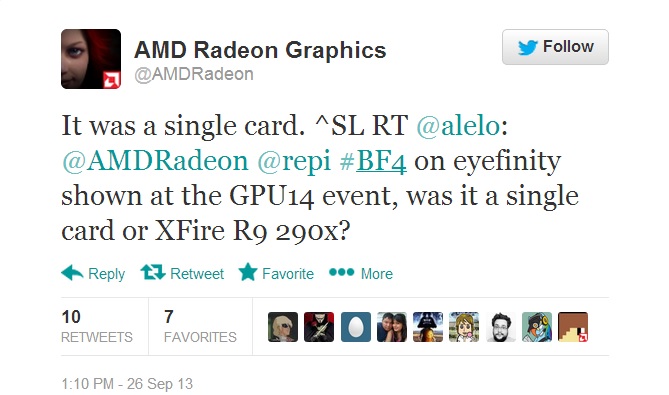 Now that’s simply spectacular. Rumor has it that R9 290X’s specs are lower than those of Nvidia’s Titan card, yet with Mantle it seems that AMD’s latest GPU will be able to compete – or even surpass – Nvidia’s GPU flagship. Seems after all that AMD’s comment – about R9 290X surpassing the Titan – was true after all.

We’re still a bit skeptical about this whole ‘Mantle’ thing, and whether it will be use-able from other GPU manufacturers. Yes yes, AMD claimed that Mantle will be open and Nvidia will be able to use it – though during its presentation the red team claimed that Mantle works only via GCN, and as well all know Nvidia’s cards are not based on that architecture.

PCGamesHardware has captured Battlefield 4’s PC SP demo, and you can take a look at it below.

Kudos to NeoGAF’s member ‘artist’ for spotting it!