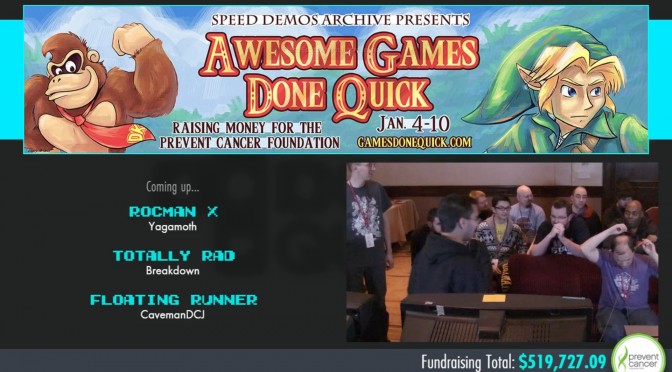 Awesome Games Done Quick (also known as AGDQ) is currently hosting a seven-day marathon and was able to raise over half million dollars. Games Done Quick is a bi-annual charity gaming marathon. Volunteers play games at incredible speed (“Speedrunning”) for entertainment. The event is streamed live online, non-stop, and all donations go directly to the charity.

This marathon began on January 4th and will last until January 10th. During these past days we’ve seen some incredible speedruns in a number of games like Quake 2, Donkey Kong Country 2, Crazy Taxi, Duke Nukem 3D, Blood, Alien vs Predator and the Sonic series.

Those interest can support this charity marathon by pledging their support on its official website.

Enjoy and let’s raise that number to one million, shall we?