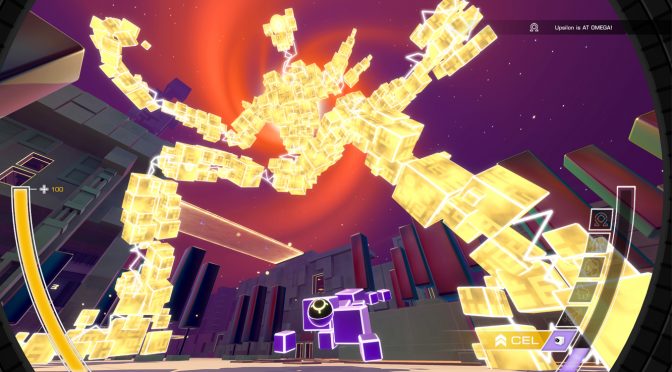 Ubisoft announced today Atomega, a new online multiplayer FPS available on September 19th on Steam. Developed by Reflections, a Ubisoft studio, in the same small incubator which created Grow Home and Grow Up, Atomega was made with a creatively experimental mind-set, deliberately seeking to create unusual concepts which will surprise and delight players.

Atomega takes place at the very end of time where reality is rapidly dissolving. All that exists are Exoforms, super advanced post-biological lifeforms, masters of matter, energy and the last distant relative to man and machine. As the laws of physics slowly repeal, the Exoforms fight for fun and dominance, replaying the final moments of the universe in an arena at the edge of destruction.

The player must acquire mass, by peacefully collecting it or via firefights, to evolve his Exoform from the nimble Atom to the godlike Omega. Competing for mass, players engage in a frantic battle for supremacy through intense 10-minute rounds, gathering up to eight players. Acquiring mass also grants points and the player with the most points at the end of the round wins. It is a relentlessly competitive experience, an easy to pick-up but hard to master game, with a light-hearted tone echoing the personality of its small development team.