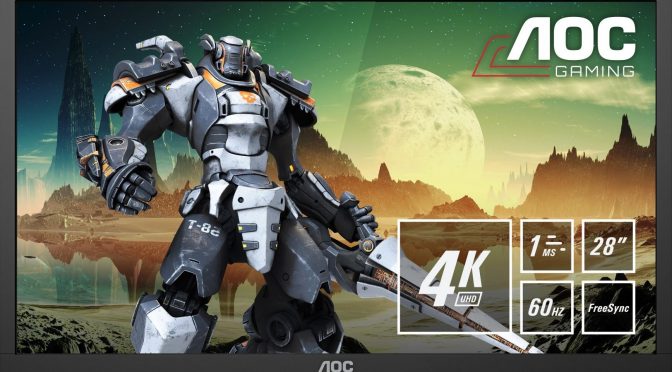 AOC announced today a brand-new gaming monitor, the 28” (71.1 cm) G2868PQU with Ultra HD / 4K (3840×2160 pixels) resolution. According to the press release, the display boasts a next-gen HDR-ready TN panel with 1 ms response time. The G2868PQU also supports AMD FreeSync which eliminates stutter and screen-tear caused by mismatched image frames between the graphics card and the monitor.

Going into more details, this HDR-ready display is said to be equipped with a new 28” TN panel, covering 102% of sRGB and 82% of AdobeRGB colour gamuts. Thus, the monitor promises to allow gamers to see 4X as many details as on a Full HD display, but experience vivid colours and popping visuals as well. Furthermore, it is said that the image on the G2868PQU is extremely sharp thanks to a density of 157.35 ppi (pixel per inch).

The AOC G2868PQU monitor is also equipped with the following gaming-specific features in its on-screen menu: