AMD’s SAM or Smart Access Memory is a new tech feature that allows AMD CPUs to access all the VRAM in any Radeon RX 6000-series GPU. Just few days ago, board partner ASUS enabled BIOS support for SAM on Intel’s 400-series motherboard chipsets as well.

In an interview with PC World, AMD has already stated that its Radeon group is working with INTEL to get this feature to work with RX 6000-series GPUs, and also on Intel’s latest compatible CPUs and motherboards.

More motherboard vendors are also going to roll out Resizable BAR support on Intel platform since the technology is part of the PCIe specification after all. It was also mentioned that AMD’s Ryzen group is working with Nvidia to get the new Smart Access Memory/SAM feature to work with NVIDIA GeForce GPUs.

Now one Japanese website ASCII has tested this SAM feature on INTEL’s platform, after enabling this option in the BIOS. The ASCII editor was able to enable the Re-Size BAR option in the Advanced Tab in BIOS, on ASUS ROG Maximus XII EXTREME motherboard, after downloading firmware version 1002.

Enabling Smart Access Memory is pretty straightforward and easy on this board. You just have to enable the “Above 4G Decoding” and “Re-size BAR Support” settings inside the BIOS.

The reviewer used the Intel Core i9-10900K CPU paired with an AMD Radeon RX 6800 XT reference GPU, and tested few games when the SAM option was enabled, and also when it was disabled. These are the full test platform specs.

Assassin’s Creed Valhalla was tested on 1080p resolution, with best Image quality settings in DX12 mode. SAM feature shows an improvement on both the Min and average FPS values. 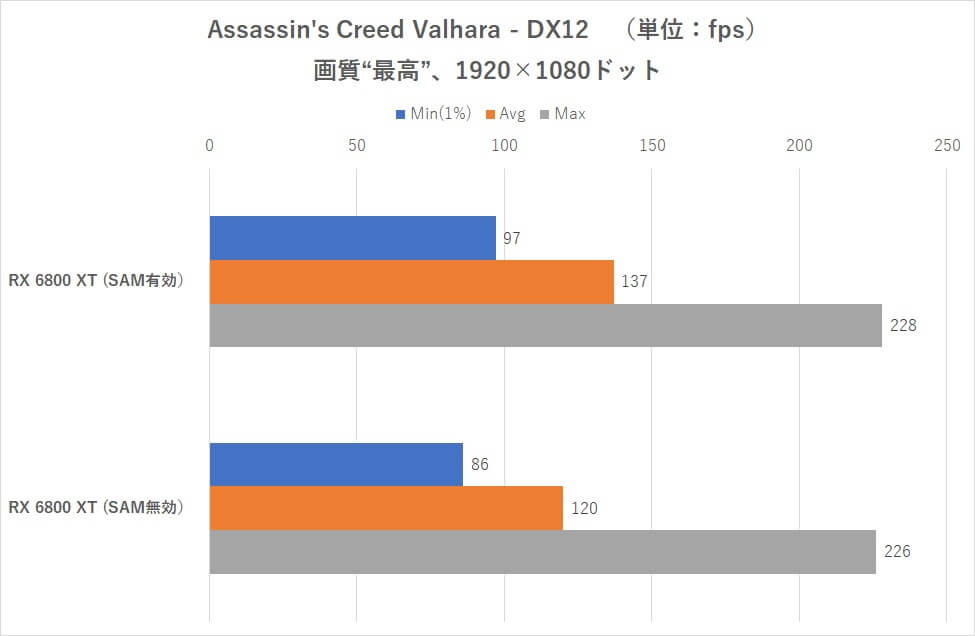 Forza Horizon 4 was tested in WQHD resolution, 2560×1440, because the 1080p scores were bottlenecked by the CPU. The Dynamic Optimization graphics setting was disabled, and the image quality used was Ultra. Please note that the chart below incorrectly shows 1920×1080 as the resolution.

The game was tested on 1440p instead, and we can again notice some performance gains when this SAM feature is enabled. 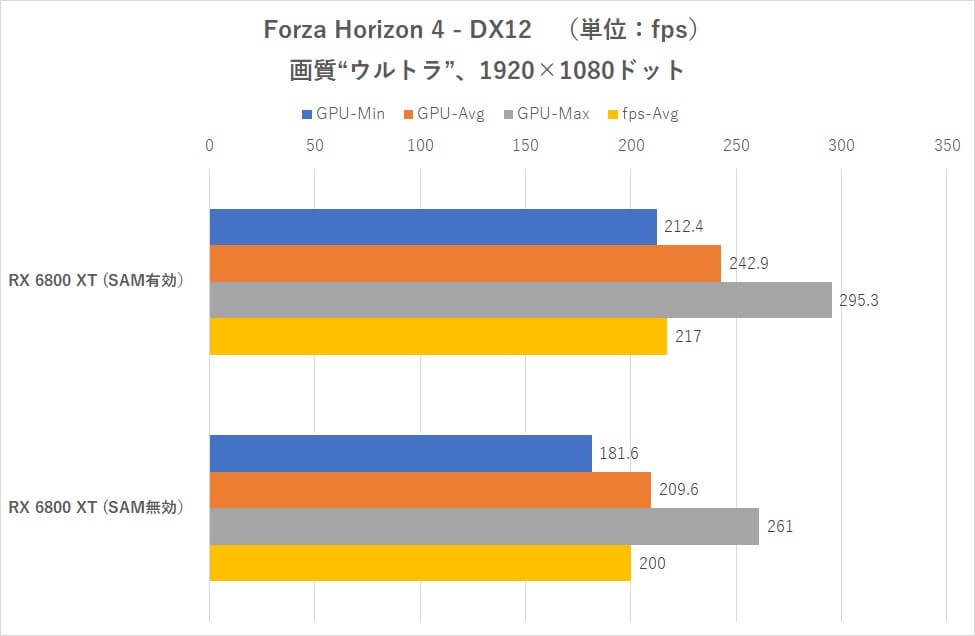 Next game is Red Dead Redemption 2, which was also tested on 1920×1080, with highest Image quality settings, in VULKAN. The reviewer has used the built-in benchmark tool. As you can see with the SAM feature enabled the minimum frame rate/FPS shows a dramatic improvement. 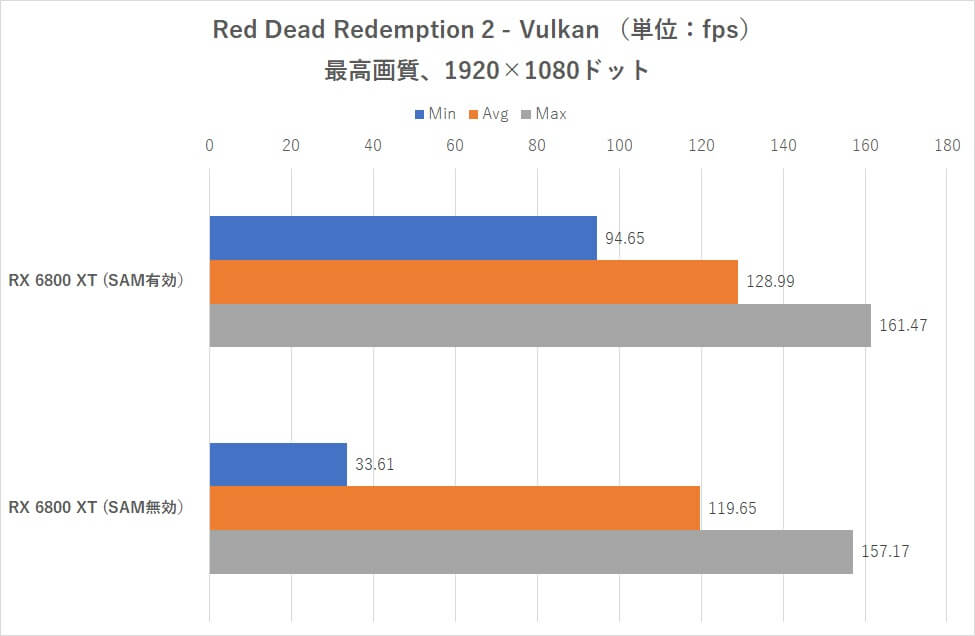 Lastly, we have Rainbow Six Siege tested on VULKAN API, with best image quality settings, and using 100% render scale. These are again 1080p fps scores. The SAM feature shows an improvement in the minimum frame rate, but the average FPS value is almost minimal. 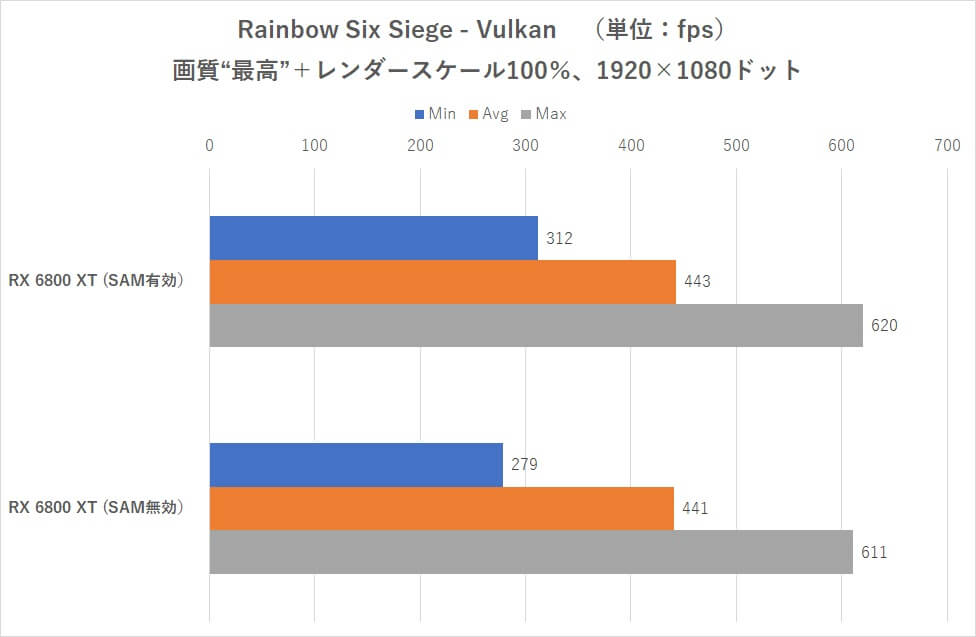 As we can see from all these results, the SAM feature can boost performance in some of the games. The performance gain appears to be inconsistent though. BAR basically defines how much discrete GPU memory space can be mapped. Modern PCs are typically limited to 256 MB of mapped memory.

This feature is rather important for graphics hardware, because the PCI BARs are usually limited to 256MB while on modern cards you can easily find 4GB or more VRAM.

The end result is that only a fraction of that VRAM is CPU accessible, causing a whole bunch of workarounds in the driver stack for that hardware.

ASRock has released a new 1.72 Beta BIOS for the Z490 Taichi motherboard.

According to some data published by Wccftech, and testing done on the Core i7-10700K CPU & Radeon RX 6800 XT GPU running on the Z490 Taichi motherboard platform, gains of up to 12% were seen. The system was also using two sticks of DDR4-2666 memory.

With CAM/SAM feature enabled, we can see a 3.32% performance gain in Shadow of the Tomb Raider game, with the Radeon RX 6800 XT graphics card, and 11.54% improvement in Assassin’s Creed Valhalla, which is impressive.