AMD’s solution was initially supposed to work with its latest Ryzen 5000-series Zen 3 CPUs, when they are paired with any RX 6000-series GPU, on any compatible B550/X570 500-series motherboard, but later on some Motherboard vendors have also started offering support for the AMD 400-series Motherboard chipsets as well.

In a recent interview with PC World, AMD also stated that its Radeon group is working with INTEL to get this feature to work with RX 6000-series GPUs, and also on Intel’s latest compatible CPUs and motherboards.

In a recent statement given to GamersNexus, NVIDIA confirmed that they are indeed working on their own Smart Access Memory feature similar to what AMD has enabled on their RDNA 2 GPU lineup.

Now ASUS is the first motherboard vendor to enable the “Resizable BAR” support or AMD Smart Access Memory technology on Intel‘s platform. This has been confirmed by one official ASUS representative on Twitter.

For now, the beta 1002 BIOS supports this feature, however, a stable release will roll out soon, which would be BIOS 1003 firmware version.

AMD Radeon RX 6000 series GPUs should now be able to take the advantage of this SAM feature, when they are paired with INTEL CPUs. Tom’s Hardware has also shown how you can enable Smart Access Memory feature through BIOS on one ASUS Z490 Motherboard, ROG Maximus XII Apex.

Enabling Smart Access Memory is pretty straightforward and easy on this board. You just have to enable the “Above 4G Decoding” and “Re-size BAR Support” settings inside the BIOS. As you can see from the screenshot posted below, both of these options are present and can be easily enabled. 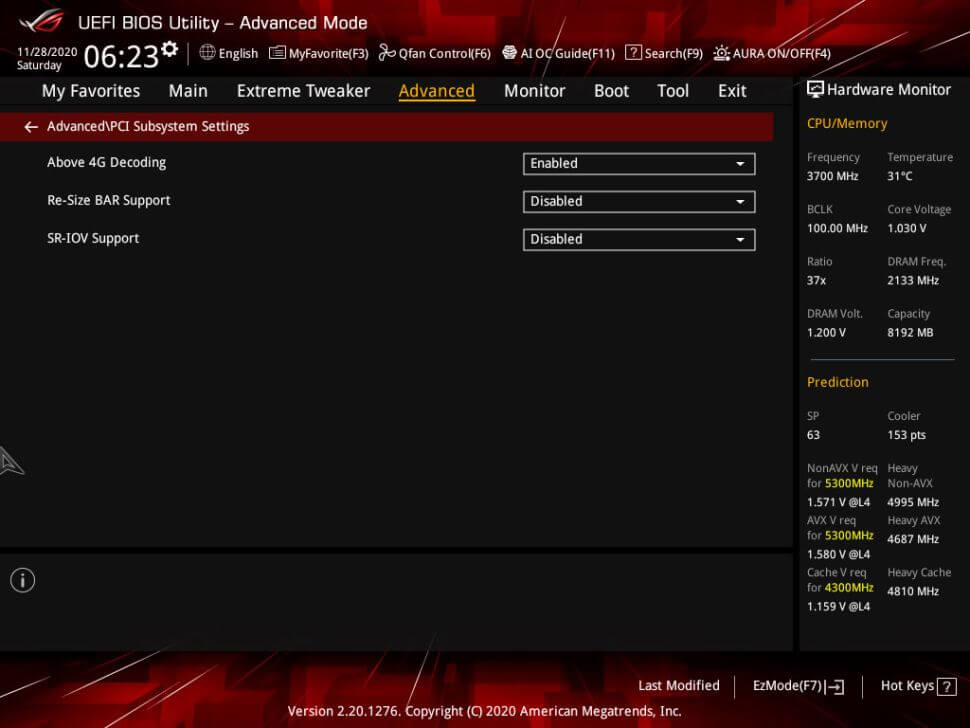 More motherboard vendors are also going to roll out Resizable BAR support on Intel platform since the technology is part of the PCIe specification after all. According to one slide shared by ASUS’s rep, Chris Wefers, we can expect at least 13.37% performance uplift in Forza Horizon 4 with BAR (Smart Access Memory) enabled, as shown below.

The testing was done on the Core i7-10700K Intel CPU platform, which was paired with the AMD Radeon RX 6800 XT GPU. The ASUS representative has confirmed that Beta BIOS is already available for the ASUS Z490, H470 and B460 motherboard chipset owners. 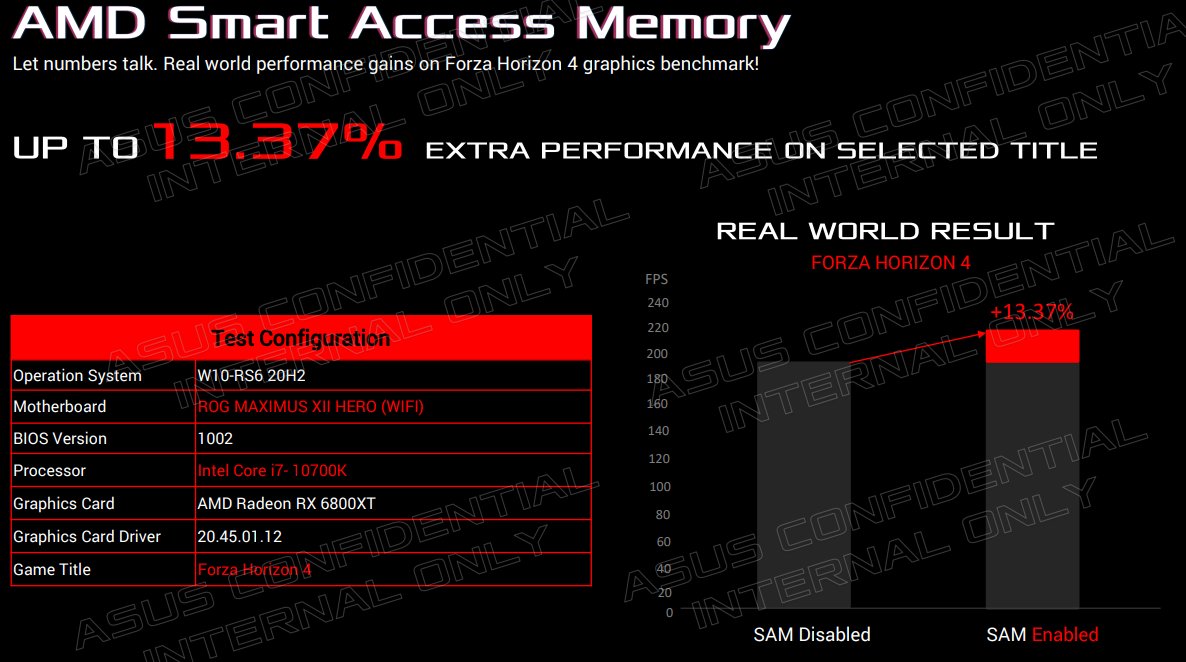 We can also expect NVIDIA GPUs to work on Intel platform with this BAR feature enabled. The green team has confirmed before that resizable BAR is actually a part of the PCI-Express specifications, and NVIDIA’s existing hardware fully supports this functionality.

So it is just a matter of time we see this feature getting implemented on Nvidia GPUs as well.

NVIDIA has stated this SAM feature is going to be enabled through future GPU driver/software updates, and it will be compatible with both AMD and Intel processors. This new technology feature will not require a PCIe Gen 4-compatible platform, as it will be supported by PCIe Gen 3 systems as well.

BAR basically defines how much discrete GPU memory space can be mapped. Modern PCs are typically limited to 256 MB of mapped memory. 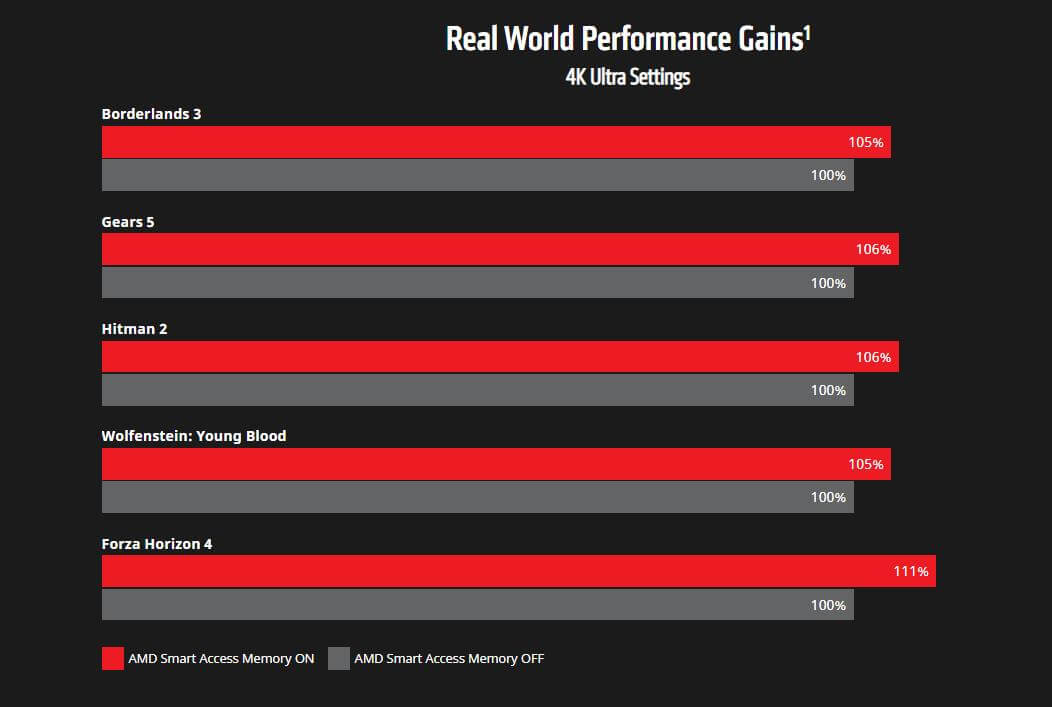 To reiterate some of the main points, AMD’s new Smart Access Memory feature will boost the overall gaming performance by optimizing the data transfer between the CPU and the GPU.

It remains to be seen how much of a performance boost this SAM feature gives on AMD, Intel and Nvidia’s hardware.