A rather strange incident has taken place recently in the Chinese local processor hardware market. Some AMD Ryzen 5 3600 6C/12T CPUs are being shipped in packaging meant for the weaker chips, like for example the Ryzen 3 3200G (which is a 4C/4T APU based on ‘Picasso’ silicon). This report comes via a recent Facebook post from the Chinese hardware website HKEPC.

Now, this may not sound like a very big deal, since it could also be a mistake from the marketing department, but this move has created some frustration and confusion amongst Chinese gamers.

Chinese hardware site HKEPC posted some photos of a Ryzen 5 3600 CPU which they recently ordered that came in a Ryzen 3 3200G processor’s box and packaging.

One sticker apparently reads, ‘Processor with Radeon Graphics’, which is misleading, because the Ryzen 5 3600 CPU does not come with any integrated onboard Graphics, unlike the Ryzen 3 3200G APU.

Apparently, this appears to be the result of unexpectedly high volume sales of the Ryzen 5 3600 CPUs during the Chinese mid-year sale this June, forcing AMD’s Chinese team to use old packaging instead of waiting for new batches to arrive. Of course, it’s also entirely possible that this is the result of a simple mistake during packaging, though this seems unlikely, but you have to imagine that some customers were pretty much confused when they received the package.

Though, you should keep in mind that the pricing and actual product inside remains unchanged. Only the packaging has been swapped. These boxes did have the processor parts the customers ordered, the Ryzen 5 3600.

I’ve personally had to return a CPU to ‘Newegg’ after they accidentally sent me the wrong SKU, so it’s always better to double check what’s inside the box, and compare it with what your system/PC reads when the product has been fully installed. 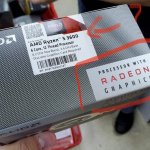 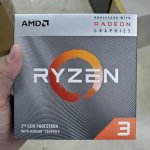 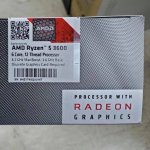