A few days ago, AMD officially launched its Big Navi graphics cards based on the RDNA 2 architecture. The red team lifted the review/sales embargo for the AMD Radeon RX 6800 and RX 6800XT cards, respectively.

Several reference-design boards were reviewed, and most of the cards also went ‘out of stock’ after the sales embargo was lifted. The situation was just as bad as the RTX 3080 launch just a few months ago. Custom AIB RX 6000 cards were launched after a week later though, on November 25’Th.

Many were hoping to buy these custom AIB GPU Models but these cards had the same availability issue at launch. Most of the E-tailers/Retailers worldwide couldn’t even take pre-orders, because the stock was very less and severely limited as well.

John also updated us on this custom GPU stock issue, and one of the Australian retailer PLE Computers claimed that AMD basically paper launched its new RX 6000-series GPUs. The prices for these GPUs were higher than their official MSRP set by AMD. It was ridiculous, because in some cases the RX 6800 GPU was costing even more than the Nvidia Geforce RTX 3080 Ampere GPU.

What’s even worse is that most of these custom AIB GPUs were actually selling at inflated prices on every online shop, even if the retailers took some pre-orders. These custom cards were selling way over the official suggested retail pricing from AMD.

A lot of other retailers have also stated that they had very limited stock, while others did not receive any custom GPUs at all. Retailers held off from taking pre-orders to avoid unnecessary traffic.

The custom GPU prices were around 90 to 250 USD higher than the official MSRP set by AMD. Custom GPU models usually sell at a slightly premium price than the reference-based cards, based on the PCB design, build quality, and cooling, but in this case the price was way too much high, for some of AIB models, if not all.

In response to this issue, Hardware Unboxed recently posted a Q&A session Video in which they have stated that AMD has acknowledged this whole situation and the company is working with AIBs to make sure the cards are back in stock, and they start selling at the official MSRP within 4 to 8 weeks time from now.

AMD is also aware that these GPUs have been selling at inflated prices worldwide. Though, the company did not explain why there was a severe shortage of these custom GPUs, and why so many retailers did not even receive these cards on time as well.

To quote the statement from Hardware Unboxed:

“We have had a private conversation with AMD. They assured us that in 4 to 8 weeks there will be AIB cards available at MSRP. They said they enabled the AIBs to achieve the 649 dollars [RX 6800 XT] MSRP and they expect that to happen within 8 weeks.” – Steve Walton, Hardware Unboxed.

So there you have it. This year has witnessed the worst GPU and hardware launch in decades. The reference RX 6000 GPU models are also out of stock globally.

2020 has seen unprecedented demand for new gaming hardware, but neither AMD nor Nvidia are close to satisfying the needs of today’s PC gaming market, and gamers.

Here is hoping 2021 starts off better for gamers all across the globe, and the demand vs. supply/stock issue also stabilizes as well. This whole situation till now has been frustrating to say the least. 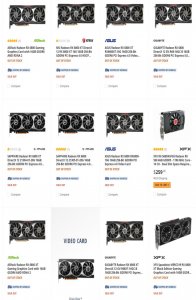 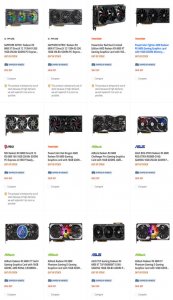