After the recent investigation by Poland’s Consumer Protection Agency UOKiK  over Cyberpunk 2077’s troubled launch, CDPR has issued an official apology statement. In a short 5 minutes video, CDPR co-founder Marcin Iwinski explains what caused the console launch of this highly anticipated game to not meet up with the requirements and expectations. But unfortunately they didn’t focus on the PC version  of this game.

The UOKiK has been watching how CD Projekt Red is fixing the broken versions of the game and addressing customer complaints. Cyberpunk 2077’s poor PS4 and Xbox One performance has caused massive controversy, and shares have also dropped by 33% since the game’s release.

The current technical state on PS4 and Xbox One ended up getting the game pulled from the PlayStation Store, with many major stores also offering refunds to disgruntled customers. The new statement and the video issued by CDPR mainly focuses on the poor launch of the game on old gen consoles, citing work from home and bandwidth streaming as the main reasons behind the huge gap between PC and console version of this game.

The main culprit described by Marcin Iwinski was work from home issues, and having to constantly improve the in-game streaming system for old-gen consoles, which lead to poor optimization because of the limited bandwidth. When as a matter of fact we all know that PC version of this game is also riddled with bugs. It’s just that it runs better than the old-gen console versions. So basically this is just damage control from the developer.

As the official statement reads,

We are committed to fixing bugs and crashes and will continue to work and improve the game via future updates to make sure you are enjoying the game regardless of the platform.

We will use this space to inform you about the progress being made on Cyberpunk 2077’s further development, including information about updates and improvements, free DLCs, and more.”

The FAQ mainly puts emphasis on the poor performance and optimization on old-gen consoles. CDPR explains why there is such a gap between the PC version of Cyberpunk 2077 and old-gen consoles:

“Cyberpunk 2077 is huge in scope, it features a multitude of custom objects, interacting systems and mechanics. In the game, everything is not stretched out over flat terrain where we can make things less taxing hardware-wise, but condensed in one big city and in a relatively loading-free environment.

We made it even more difficult for ourselves by first wanting to make the game look epic on PCs and then adjusting it to consoles — especially old-gens. That was our core assumption. And things did not look super difficult at first, while we knew the hardware gap, ultimately, time has proven that we’ve underestimated the task.”

Also CDPR claims it has tested the old-gen console versions as well, but the testing did not show many of the issues they experienced while playing the game. CDPR further explains why there is currently a vast difference between the PC and console reviews:

“We started sending out PC review keys to start the review process in the first week of December. Come December 10th, launch day, we had a really good start with PC reviews, and while it’s not perfect, this is a version of the game we were, and still are, very proud of. When it comes to the review process for consoles, at the same time PC codes were sent out we were still working hard to improve the quality of the game on old-gen consoles.

Every extra day that we worked on the day zero update brought visible improvement — that’s why we started sending console codes for reviews on the 8th December, which was later than we had planned.”

CDPR goes on to say their top priority since launch has always been to fix the current bugs in Cyberpunk 2077 game. The company’s co-founder also announced that the free DLC will be released afterwards than what was initially planned. The team’s top priority right now is to work on the most important fixes and updates for this game, so the DLC is going to get delayed for now.

Regarding the old-gen versions the first two patches should arrive later in this quarter, however, once again there has been no mention about the PC version of this game. 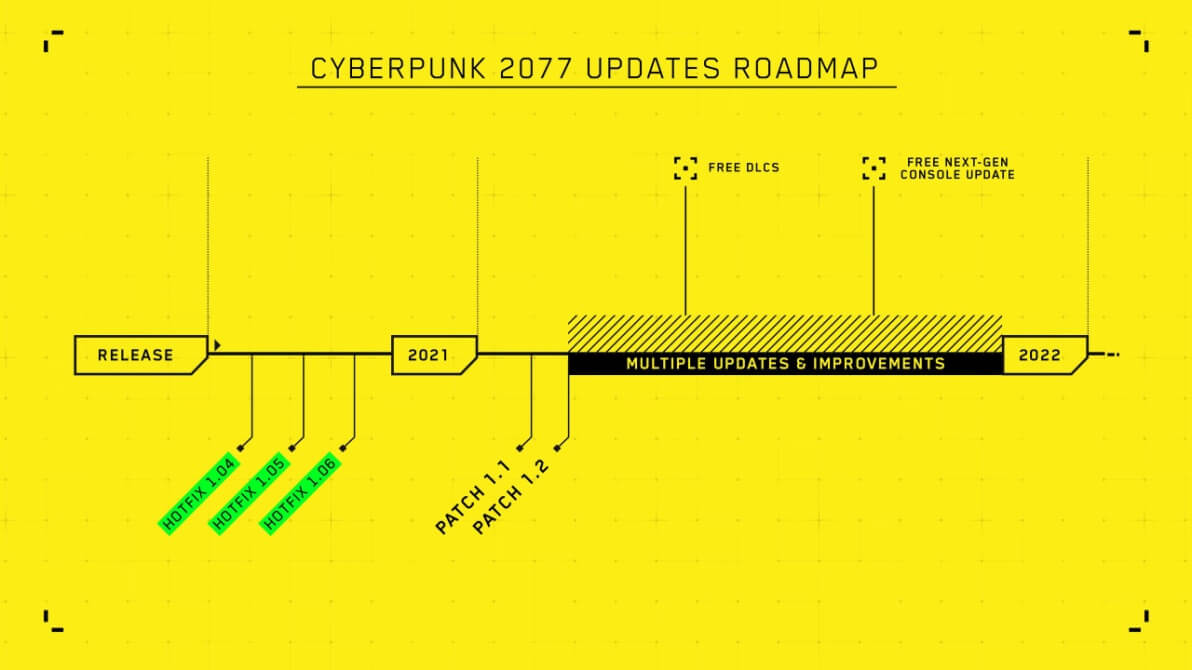 Below, you’ll find CD PROJEKT’s co-founder’s personal explanation of what the days leading up to the launch of Cyberpunk 2077 looked like, sharing the studio’s perspective on what happened with the game on old-generation consoles.

Cyberpunk 2077 — Our Commitment to Quality