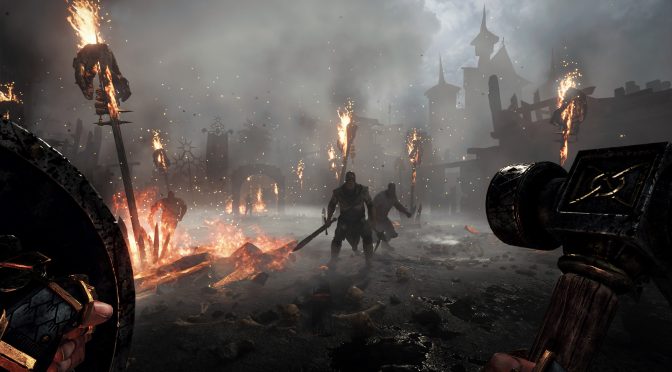 A few days ago, we had the pleasure of interviewing Fatshark’s CTO and co-founder, Rikard Blomberg. Blomberg shared more details about Warhammer Vermintide 2’s Engine and talked about DX12, the Denuvo anti-tamper tech, Physically-based Rendering and more. Enjoy!

DSOGaming: Before we begin, please introduce yourselves

DSOG: As with the first game, Warhammer Vermintide 2 is powered by the Autodesk Stingray Engine, right? Can you share more details about the key graphical/tech features of the engine?

RB: The key features of Stingray is that it is a highly data driven game engine. This allows us to be very flexible and work iteratively on features that might seem very core to other engines.

All rendering features for example are not hard coded in the engine but driven by simple configuration and shader source files which makes experimenting with new rendering techniques and features very simple. As such our Vermintide renderer currently uses a lot of features that are not available in Stingray and we have also removed a lot of features from Stingray that we do not need for Vermintide 2.

Stingray does however come stocked with some advanced rendering features that we do make use of such as TAA, SSAO, SSR, Physically Based Shading as well as many essential game engine systems such as Animation and Ragdoll systems, Lua scripting and the WWise Audio engine.

DSOG: Will Warhammer Vermintide 2 take advantage of multiple CPU cores? Will there be significant performance differences between quad-cores and six-cores?

RB: Many of the Systems in Stingray take advantage of multiple CPU cores just as they did in Vermintide 1. Animations, particle effects, culling and physics all go wide on as many cores as possible. We also continually improve on the systems that are currently not going wide on multiple cores such as our gameplay code that is mostly written in LUA.

Regarding significant performance differences it is hard to say since performance depends a lot on multiple factors. If your system in general is gpu bound having multiple cores might not give you very much but if you are generally cpu bound during animation and culling you should see some difference in your performance.

DSOG: What will be the differences between DX12 and DX11? Are you using any specific graphical effects in DX12? Moreover, which DX12 features will you be using (draw call overhead reduction, Async compute, multi-adapter, etc)?

RB: Dx12 will have reduced draw call overhead and will better utilize more cpu cores. We are experimenting with async compute but nothing is final yet.

DSOG: Will Vermintide 2 support SLI/Crossfire systems from the get-go, both in DX11 and DX12?

RB: Not decided yet.

DSOG: Since we’ve seen a lot of games running faster in DX11 than in DX12, will Vermintide 2 run faster under the DX12 API on both NVIDIA and AMD GPUs?

RB: It depends on the graphic card, we have seen results vary.

RB: Compared to Vermintide 1 the main differences and improvements on lighting will be an increased focus on volumetric lighting effects and improved screen space ambient occlusion as well as additional tweaks to lighting performance allowing our lighting artists to push the quality of the environments even more.

We currently do not have any GI solutions and much of the perceived improvement in visual quality should be attributed the hard work of our Artists here at Fatshark.

DSOG: Physically-based rendering is the next big ‘graphical’ thing. Does Vermintide 2 take advantage of it? If so, can you explain the benefits of using this rendering technique to both our advanced-tech readers and the average Joe?

RB: We actually started our transition into “Physically-based” rendering with Vermintide 1 and this transition continues in Vermintide 2.

“Physically-based” rendering isn’t really one technique or a specific
feature but a mindset for the whole rendering pipeline as well as for the content production. With this approach to rendering and content creation we should base our material creation, lighting calculations and post effect behavior on correct physical behavior. The benefits of this approach is for example that content creation should become simpler as object materials should react correctly under all realistic lighting conditions allowing artists to make an asset only once and not one per lighting environment. This however also imposes demands as each rendered frame is a careful
balance where everything has to be correct otherwise the whole scene breaks down visually.

In the end i would say all studios and rendering pipelines exist on a
spectrum where most are to some degree “Physically based” nowadays i would say that we are somewhere in the middle of that spectrum.

DSOG: Can you share the number of polygons per characters/enemies on Ultra settings?

RB: At the highest level of detail our characters generally top out at around 70k polygons. You rarely see them at this level throughout the game as Vermintide 2 is as hectic as Vermintide 1. If you are playing the game as it should be played you should be killing chaos and skaven alike well before they get that close 😉

DSOG: If you could push to the limits of only one graphical feature of Vermintide 2 (lighting, textures, geometry, LOD, polygons per characters), what that would be and why?

RB: I would say that the one area where we would like to push the envelope further in Vermintide 2 is the amount of movement and life in our environments.

This is more of a production limit than a technical one to some extent but adding more life and story behind our scenery would add more to improve the game than any amount of extra polygons on our characters can. With so much animation, ai and physics time and performance dedicated to our hordes of skaven and chaos in Vermintide 2 there is also not much left over for our environments.

DSOG: What will be the graphical differences between PC and Xbox One X/PS4 Pro? And are you targeting for graphical parity on PC and consoles, or will you take advantage of the additional raw power of modern-day PC GPUs?

RB: Not yet decided. Though we won’t hold back on modern PC raw power. 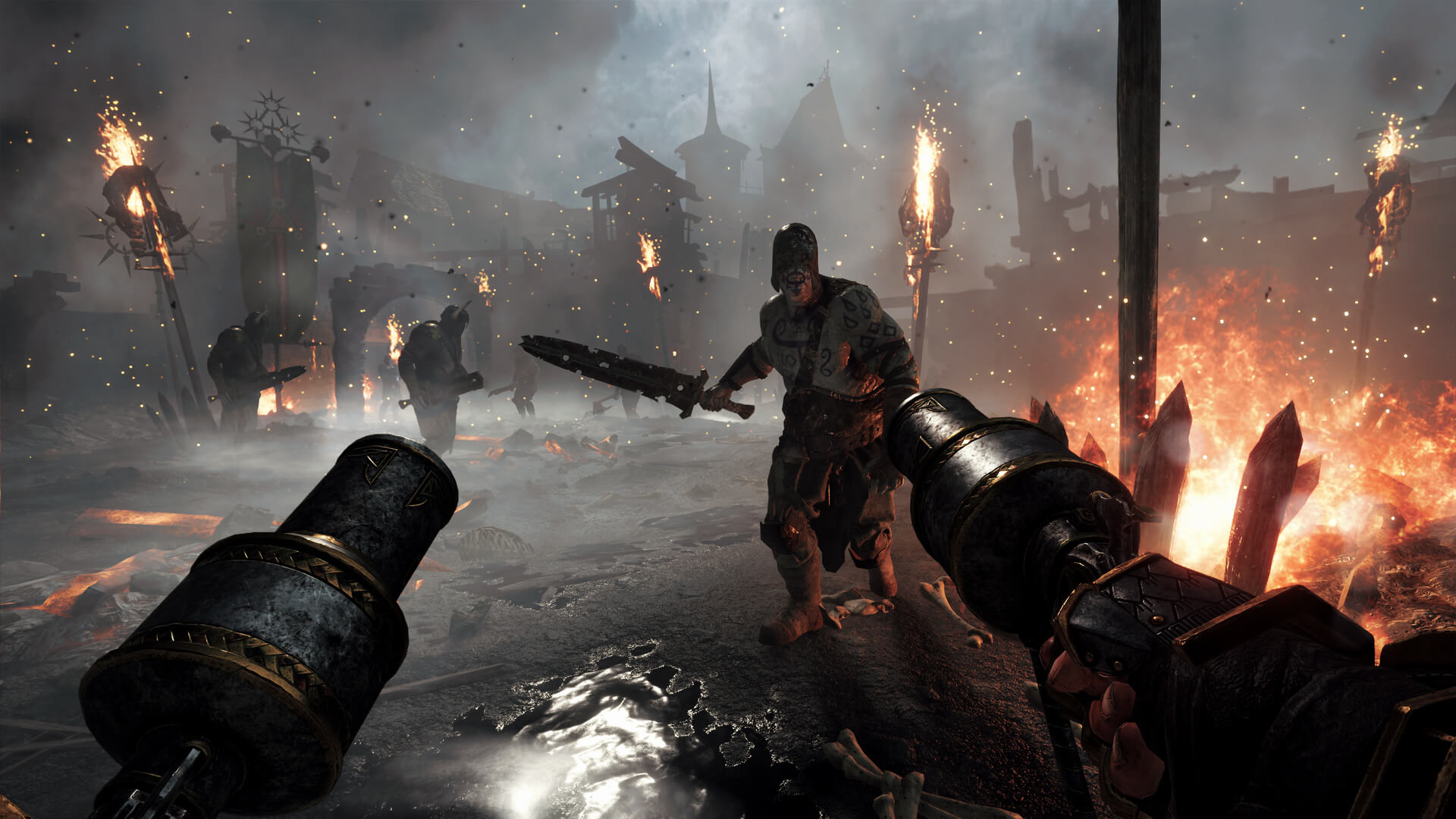 DSOG: Can you share more details about the game’s physics engine?

DSOG: Do you use photogrammetry? And can PC gamers expect 4K textures (if they are not present in the game by default on the highest settings, can they expect them via a bonus HD Texture Pack)?

RB: We have not used photogrammetry on any of our content in Vermintide 1 or 2. One reason is that it with our fantasy setting in the Warhammer world we prefer to have full control over our content to make sure that we can deliver the visual experience befitting of this gritty grim world. Another reason is that with increasing use of Substance Designer and other generative methods it is getting easier and easier to generate physically correct materials with better control that photogrammetry gives you.

As for 4k textures we do rely a lot on detail maps and custom shader work to boost detail on surfaces instead of relying on high res baked textures. Some objects like weapons and characters do have enough detail to fill out 4k resolution.

We are also including the ability to create mods for Vermintide 2 where our community can add their own content but for now we have no plans to release any official HD Texture Packs.

DSOG:  Will you be using the Denuvo anti-tamper tech? If yes/no, why?

RB: No. Working together with our players to create the best game we can is a key part of our game development philosophy; be it through listening to community feedback, encouraging player-player interaction, doing what we can to encourage modding or by having a non-paywall DLC policy. As long as we provide a good experience and open communication to our players, we believe they will stay loyal and support us in giving them more. Denuvo would be redundant and even go so far as be counter productive to this philosophy.

DSOG: Pop-in of objects remains pretty distracting in a lot of games. What’s your LOD solution? And have you found a solution to smooth out the pop-in of distant shadows and objects?

RB: Our approach to LODs currently is to make sure that there is as little of a visual difference to our LODs as possible to avoid popping. We do not currently use any advanced LOD system as we prefer to put our performance efforts elsewhere. Our current LOD system is a very naive implementation based on screen height of our objects and has so far served us well enough.

DSOG: Can you estimate what PC system will be required to run Vermintide 2 with 60fps at 1080p on Ultra settings?

RB: We don’t know yet as we are still working on optimization.

DSOG: Thank you very much for the interview, any last words you want to share with our fans?

RB: We hope you will enjoy the game and thanks for reading! And see you in the betas (aka don’t forget to sign up at the official website).