This weekend, we had the pleasure of interviewing Dylan Browne of Incandescent Imaging who shared with us some interesting new tech details about his upcoming sci-fi horror title, Caffeine. We talked with Dylan about the tech features behind Caffeine, the inclusion of a FOV slider and options to toggle on/off mouse acceleration, whether the game will include a fully dynamic shadowing system and whether Global Illumination is being utilized. Enjoy the interview after the jump!

Dylan Browne: My name is Dylan Browne, I live in Adelaide, South Australia and I am the developer of Sci-Fi Horror game Caffeine.

DSOGaming: Caffeine will be powered by Unreal Engine 4. Can you share some tech details about what tech features the game will support (number of simultaneous light sources, Parallax Occlusion Mapping and tessellation support, whether it will have a full dynamic shadowing system, etc)?

DB: Sure, Caffeine is currently utilizing many of the features of Unreal Engine 4, at the moment tessellation is definitely being used for pipes and some of the wall sections to give a great smooth effect. In terms of dynamic shadows, I am using a fair few at the moment and I am planning on moving over to fully dynamic once work is completed on a more robust real-time global illumination system as at the moment the feature is not finished.

DB: Yes, Caffeine has quite substantial performance issues while in UE3 mainly due to texture resolution, I really wanted to push the quality of my textures right up with a lot of 4K textures (The skydome was 8K) which UE3 did not cope well with, however with Unreal 4 performance is fantastic and feels very fluid.

DSOGaming: In the latest trailers of Caffeine, we’ve seen some gorgeous reflections? Are you taking advantage of Unreal Engine 4’s Global Illumination capabilities?

DB: Yes the reflections are made possible with UE4’s Screen Space Reflections which are real-time! This simply wasn’t possible in UE3 and I have been focusing a lot of my design on taking advantage of this. As for Global illumination it is baked at the moment but I’m hopeful for the real-time GI to be more robust soon.

DB: That would have to be the Screen Space Reflections because they really add to a scene, especially materials that are metallic, it really opens up a whole new world of possibilities for lighting an area.

The main graphical feature that I would love to see added to Caffeine and Unreal 4 would be to have specular calculation for translucent surfaces, as I understand Unreal Engine 4 is a deferred renderer and to get proper specular with transparency we need to have some forward rendering going on, at the moment translucency often looks really out of place in a scene.

DSOGaming: What are the main challenges of creating Caffeine’s environments?

DB: I would say the main challenge would be to differentiate similar hallways with lighting to not seem like a repetitive environment, also designing everything to fit together in terms of style and layout. 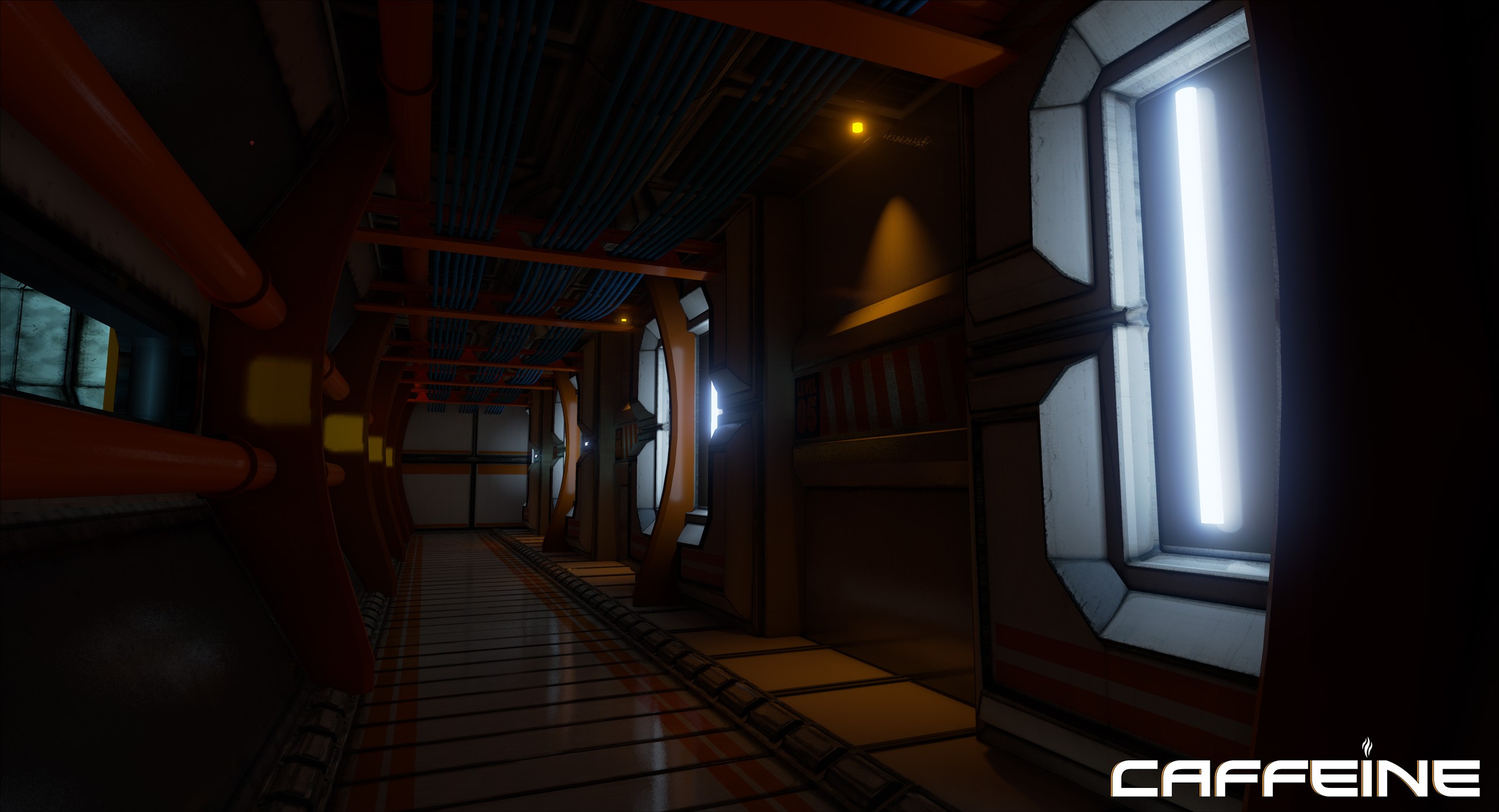 DSOGaming: Shadows are essential for horror titles. Will every light source cast dynamic shadows to objects or will there be a lot of pre-baked shadows? Also, are you taking advantage of Ambient Occlusion and will there be support for HBAO+ (an AO technique that offers better performance than all other AO techniques)?

DB: Yes, at the moment many lights are casting fully dynamic shadows with some others are thrown in for nice soft static shadows to create a more believable environment. Ambient Occlusion is currently being used and I would like to get HBAO+ working sometime but I have not looked into it much at this early stage.

DSOGaming: Since Caffeine is primarily developed for the PC audience, will there be a FOV slider and options to completely disable mouse acceleration/smoothing?

DB: Yes there will be an FOV slider in the final release and the option to turn off mouse acceleration / smoothing.

DSOGaming: Caffeine has an IndieGoGo campaign. In case it does not hit its goal, what will happen? Will you continue working on it?

DB: If Caffeine’s IndieGoGo does not reach its goal I will still be working on the title in my free time, there is also the possibility of other funding avenues but in the end it is a labour of love and I intend to complete it. 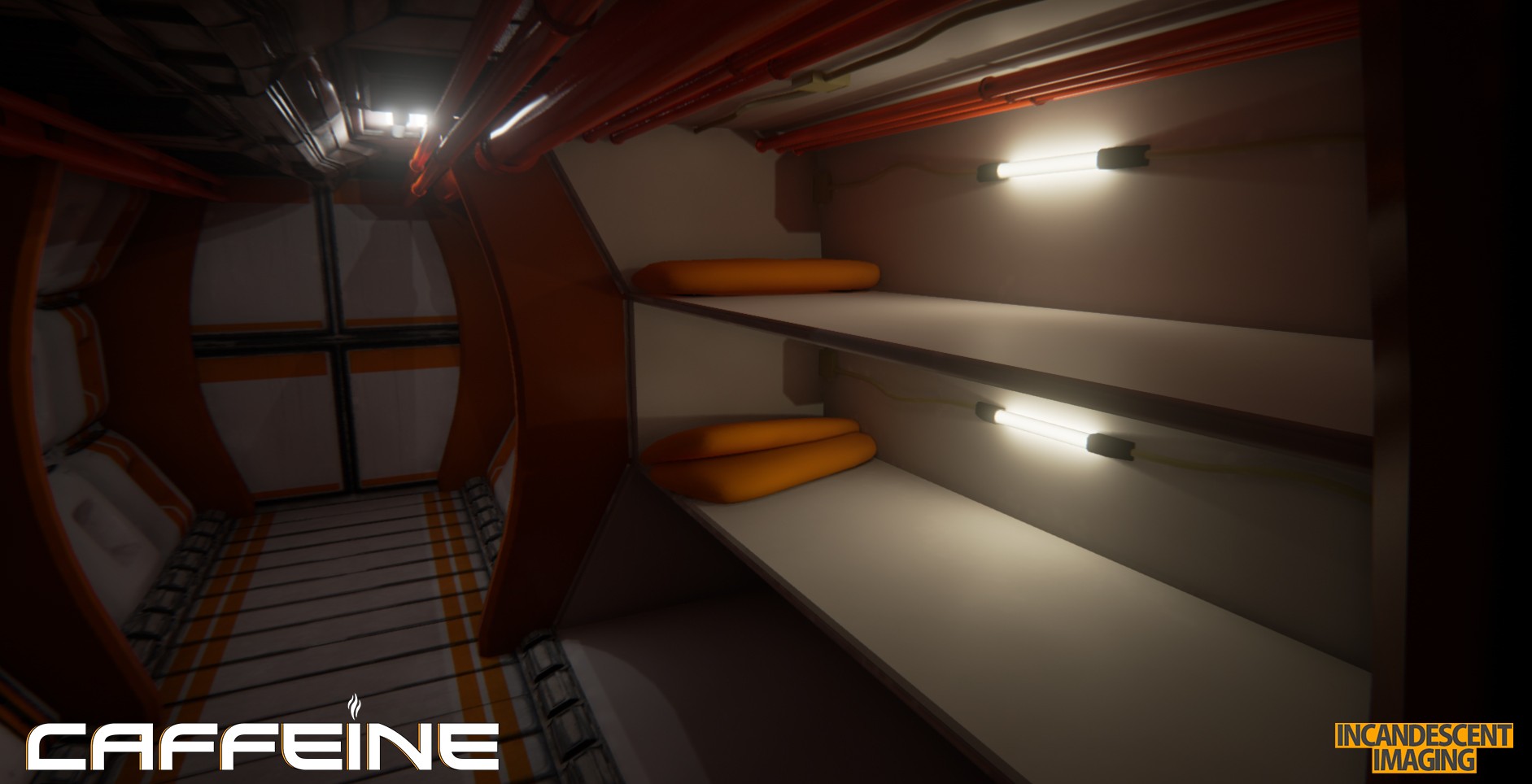 DSOGaming: Moving away from the technical stuff, what’s your opinion on the horror genre? What are the upsides and downsides of the genre? And why should more players be interested in Caffeine?

DB: I really love the Horror genre because it often used to be the main area where graphical fidelity was being pushed beyond everything else out there, but I feel as if it has gotten a little repetitive and I definitely think that Caffeine can bring something new with its lore and quirky story.

DSOGaming: Since Caffeine will support Oculus Rift, what’s your opinion on the recent acquisition by Facebook? Will Caffeine support other VR devices?

DB: I have no problem with Facebook’s acquisition as long as they don’t meddle with Oculus too much, as for other devices at this time Oculus is the only one confirmed but you never know what the future holds.

DSOGaming: Thanks for the interview. Any last words you want to share with our readers?

DB: No problem it was a blast, I hope that you all will enjoy Caffeine when it is released!