Creepy Jar has released in Early Access its open-world survival game, Green Hell. The game is powered by the Unity Engine, is set in the uncharted unique setting of the Amazonian rainforest, and – according to the developers – will leave Early Access in 3 months. As such, we’ve decided to take a first look at its performance.

Do note that these are initial performance impressions. The game may perform better when it fully releases and we’ll be sure to put it to the test once it leaves Steam Early Access.

Green Hell is a really demanding title in its current state. The game does not come with many graphics settings and our GTX980Ti was unable to run the game smoothly on Very High at 1080p. On the other hand, our AMD Radeon RX Vega 64 was able to come close to a 60fps experience (though there were some framerate drops to 49fps). Furthermore, Green Hell is a game that appears to favour NVIDIA’s over AMD’s GPUs. Needless to say that, since this is a really demanding title and there are not many graphics settings to tweak, there was no reason at all to test our GTX690 or our AMD Radeon RX580 with this particular game. 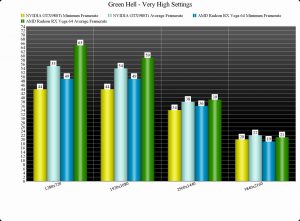 Now while Green Hell appears to be a GPU-bound title, it also suffers from other optimization issues. In the following screenshot, for example, you can see that both our CPU and GPU were under-used, resulting in an underwhelming performance. 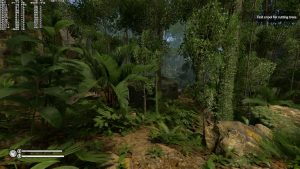 Graphics wise, Green Hell looks great in still images as you will see below. In motion, though, thing are not looking that great. The game suffers from major pop-in issues of shadows and objects, there are animations issues when interacting with the plants, and there are some stutter issues here and there. Visually, Green Hell has potential, though Creepy Jar will have to significantly optimize its title as in its current state its visuals do not justify their requirements.