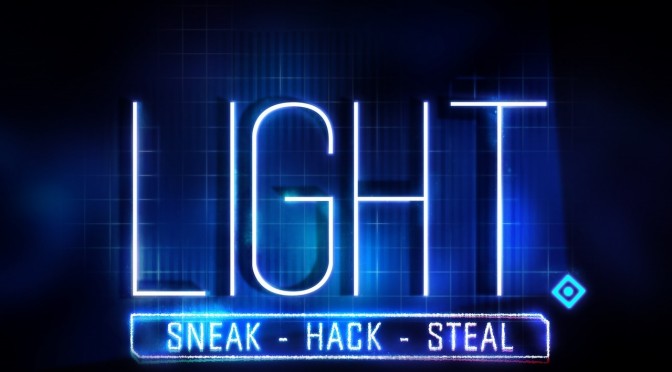 Team 17 was kind enough to provide us with a review code for Just A Pixel’s latest indie title, Light. Light is descrbed as a minimalist stealth infiltration game with a strong narrative that drives the action. And while its concept – and gameplay mechanics – are quite polished, the game is way too short even for today’s indie standards.

In each of the game’s levels, you’ll have to hack computers, collect intel, avoid – or disable – security cameras and unlock doors to further progress. Moreover, you can kill enemies (if you approach them stealthily enough before being spotted), hide their bodies, and disguise yourselves with other clothes.

Players control the main character with W-A-S-D, and they can use the mouse to cycle through the available hack options (that can be brought up by pressing the Q key… once of course you’ve hacked a computer).

As you’d expect, enemies have a visible line of sight, something that you can use to your advantage. Unfortunately, there is no mini-map but then again, the game’s levels are relatively small so the absence of it won’t really bother you.

Light packs a great soundtrack, and sports lovely visuals. While this is a very simple – graphically – game, its art style is great. So yeah, do not expect complex graphical techniques similar to those found in other triple-A games. Still, Light is easy on the eyes and has that retro ‘Tron’ look that will captivate you.

Our biggest gripe with Light is its length. This game is too damn short. Sure thing, you can re-visit the levels and complete them without killing any guard or with a faster time, but – let’s be honest – that’s not what most gamers will be doing after finishing it.

It took us only one hour to finish all of the game’s levels (so it may take you less or slightly more than that). Not only that, but there isn’t any level editor, something that would obviously definitely benefit such a short game. And given the fact that the game will be priced at around £9.99/$12.99/€11,99, we are a bit uncertain whether we should recommend it or not. Therefore, we’ll leave to you to decide.