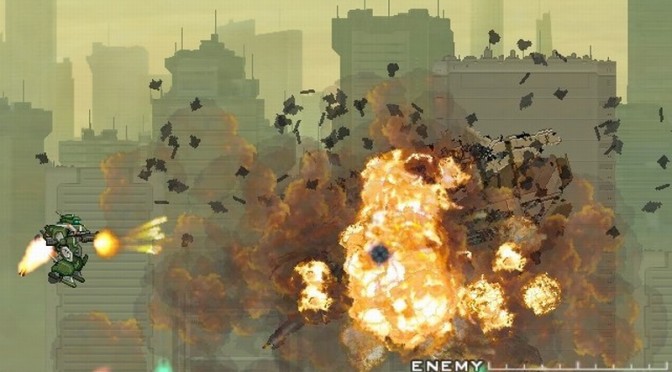 Nyu Media has provided us with a review code for GIGANTIC ARMY and as always, you can view below the first 10 minutes from this indie title. According to the company, GIGANTIC ARMY puts you in command of the ‘GMR-34 SALADIN’ a robotic powerhouse bristling with enough weaponry to singlehandedly take down a planetary army , and versatile enough to dodge or deflect whatever the enemy throws at you.

At first glance, GIGANTIC ARMY looks lovely and cool. The game packs gorgeous 16-bit retro visuals that will take you back to the SNES days. I love this kind of games, so I was immediately excited with GIGANTIC ARMY. However, its control mechanics are not up to what I’d expect from a new title.

My biggest gripe with GIGANTIC ARMY was the fact that I could not rotate my guns while shooting. In this kind of games, the ability to rotate quickly and accurate your guns is essential. Unfortunately, in GIGANTIC ARMY you’ll have to stop shooting in order to rotate your guns.

Truth be told, most of you will get used to it, but still; I strongly believe that the title would benefit from more ‘fluent’ and ‘smooth’ controls.

Moreover – and given the nature of what you are controlling – your mech is not as fast as you’d hope to. Sure thing there is a dash ability but the game feels really ‘slow’. And while that makes sense (after all, mechs can’t be fast like cheetahs), it has a negative impact on the game’s arcade nature.

For what is worth, I enjoyed playing GIGANTIC ARMY but I feel that it could be so much more than what it currently is. And that’s a shame.

GIGANTIC ARMY is currently available for $5.99 from GIGANTICARMY.com, GamersGate, Desura and Rice Digital.