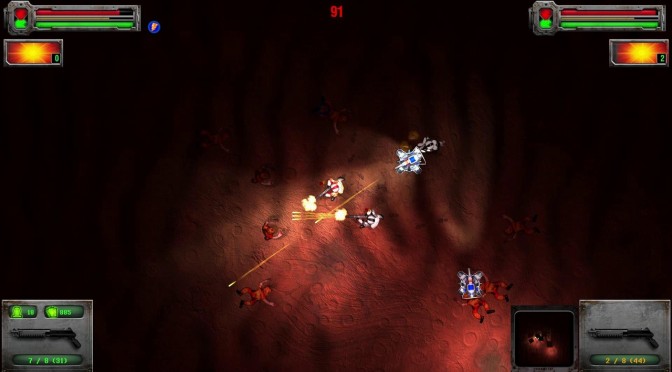 Daithi McHugh – creator of Deadstone; a top-down 2D Shooter with tower defense & RPG elements – was kind enough to provide us with a review key for this new game, and you can read below our first impressions. And as always, we’ve also included a video playthrough showing the first 10 minutes of it.

Deadstone is described as a compelling blend of fast paced 2D combat and tower defense, backed by elements of resource management and an in-depth character development system.

In Deadstone, players assume the role of Blake, a private security operative fleeing the Icarus space station after a bacterial outbreak transforms the station’s occupants into homicidal monsters.

Basically, think of Deadstone as an arena-style game in which players have to kill hordes of infected humans and dogs. Players are afterwards rewarded for this task and are brought to a menu via which they can set their defenses, purchase ammo, new weapons and items, upgrade their characters skills and add some perks.

The good news here is that Deadstone is a story-driven game. Contrary to similar titles, this one has a storyline and is quite interesting. Add this to its in-depth character customization and you’ve got yourself a cleverly disguised arena/defense game.

For what is worth, I really enjoyed Deadstone. While this is a simple game at its core, its storyline and its clever RPG elements are enough to keep you distracted/interested. The game is currently priced at 8,99€, a price that may put off some gamers, especially considering its somehow underwhelming visuals (I believe that at 5.99€ or 4.99€ this would be an instant buy for everyone). And while the game comes with 50 levels, there is minimal diversity to them – if any at all.

All in all, Deadstone is indie; it’s old-school, retro, simple yet clever, fun, and the debut of a new indie developer.