Back in our February Editorial, we claimed that we had some plans that would upset our PC die-hard fans. And today, we can reveal some of them. DSOGaming started as a multi-platform gaming website. During our first days, we had a header for all platforms (Wii, PS3, X360 and PC). Not only that, but our first post hinted towards our multi-platform nature. The point is that we lacked manpower which is why DSOG focused on the PC platform. However, and since our latest expansion, we can announce that DSOG will be covering all platforms, consoles included.
DSOGaming will not be covering consoles, we are a PC website.
Yes, DSOGaming will be now covering consoles. In fact, we’ll be covering both old-gen and current-gen consoles. Moreover, we’ll be covering mobile platforms (such as Android and iOS).
PC is the platform we love. That won’t change. DSOG=PC gaming
As said, this announcement will definitely upset our PC die-hard fans. However, you have to understand our current position. Publishers have approached us and given our financial issues, we had to resort in a number of deals. The first one was with GMG, and we can now announce that we’ll be working closely with both EA and Ubisoft.
Imagine though if something like that actually happened. The horror
Furthermore, PC won’t be the main platform we’ll be covering. We want to treat each platform equally, therefore consoles will be a major part at DSOG from now on. After all, it wouldn’t make sense to cover consoles if we were not doing our best to offer you juicy news (underground, casual and hardcore stuff) about them.
Well, at least we do share some retro news for old consoles
In short, this is a goodbye to DSOG. DSOGaming is changing. DSOGaming is evolving. DSOGaming is entering a new phase and we hope that you will support our efforts.
Jesus, do people really fall for such things? I wouldn’t follow us
We’ve been talking with both Spencer and Matt about this whole thing, and both of them agreed to help us. Matt will stop his Linux column and focus on a new about current-gen consoles, and the best experiences that can be found exclusively on them (for both Xbox One and PS4).
Spencer and Matt would definitely not accept such a thing, lol
Last but not least, here are the results from our latest poll. It appears that there are a lot of you disagreeing with our decision to stop covering DLCs. On the other hand, most of our readers agree with our decision. Still, 34% is way higher than what we initially thought.
It’s been fun writing hidden messages between paragraphs
Enjoy and stay tuned for more!
Make sure to check for hidden messages between paragraphs. Do not spoil the fun for others in our comments section. Happy April fools day everyone! 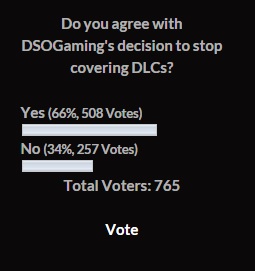