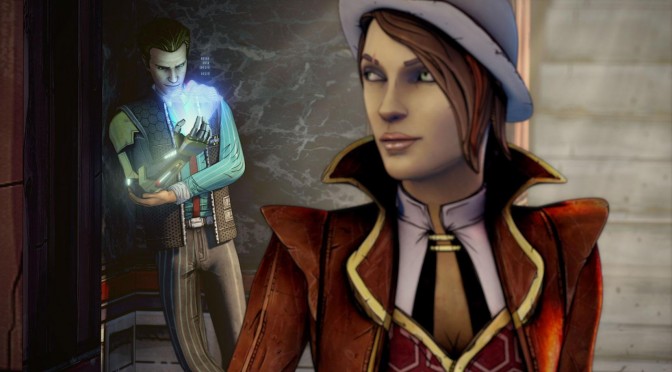 Telltale Games today released the World Premiere trailer for Tales from the Borderlands: A Telltale Games Series. Announced less than a year ago, and shown behind closed doors at E3 and PAX Prime, today is the first time the company is sharing a look at the game to fans across the world.

Telltale Games also revealed the final casting details for this game. The season will feature Troy Baker as Rhys, Laura Bailey as Fiona, Chris Hardwick as Vaughn, Erin Yvette as Sasha, Patrick Warburton as Vasquez, Nolan North as August, and Dameon Clarke as Handsome Jack. Additional casting details from the season are yet to be announced.

Set on the unforgiving world of Pandora after the events seen in Borderlands 2, Tales from the Borderlands is a five part episodic game series full of Borderlands’ trademark humor, following two adventurers on their quest for greatness.

“You’ll play as Rhys, a Hyperion ‘suit’ with dreams of being the next Handsome Jack, and Fiona, a Pandoran con artist looking to score her biggest ever swindle. Thrown together as unwilling partners in an adventure to recover cash they both think is theirs, their journey will take you on a wild ride where gangsters, bandit lords, and Vault Hunters are just some of the obstacles you’ll encounter, in this new take on the award-winning universe created by Gearbox Software.”

The season premiere episode of Tales from the Borderlands, titled ‘Zer0 Sum,’ will soon be available for digital download worldwide across multiple platforms.

The series will be available for  PC/Mac via the Telltale Online Store, Steam, and other online digital distribution outlets as a Season Pass for US$24.99 or equivalent that includes entitlement to all five episodes as they release.