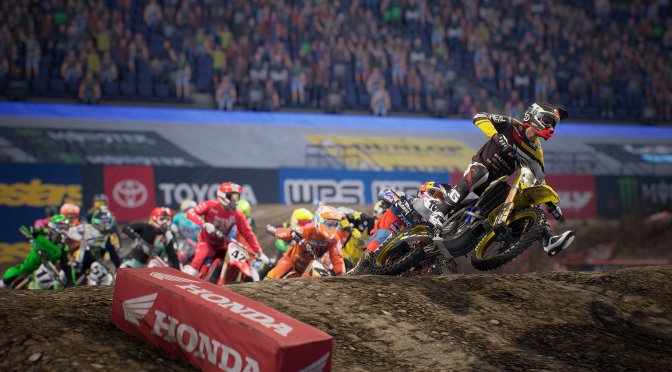 Milestone has unveiled a new trailer showing the new physics system of its Monster Energy Supercross – The Official Videogame 3. Moreover, the team revealed that the game will release on February 4th, 2020, on the PC.

As the press release reads, the new trailer gives a glimpse of the huge work made by the studio to create a new physics system that will affect both on track and in air gameplay.

“By popular demand, the studio worked a lot on the air physics, setting free the air rotation system and allowing players to freely perform their whips and scrubs. Tracks are now more alive, thanks to revised particles of fireworks, flames, dry and wet ground that are more detailed and realistic. Rider and secondary character models have been completely re-made from scratch with photo scanning that now feature a new set of animations. The new model system allowed to add for the first time a Female Rider model with its own animations.”

Monster Energy Supercross – The Official Videogame 3 will feature the 2019 Monster Energy Supercross season with 100 riders from both the 450SX and 250SX Classes and 15 official stadiums. For the first time, it will also allow players to choose between a sponsor team or an Official Supercross Team of the 2019 Championship in Career Mode. The Multiplayer Mode is now boosted with Dedicated Servers for a low latency gameplay experience, and Race Director Mode to create and manage online competitions. Players can also race in the co-op mode with 3 other friends, choosing different game modes in the replica of the legendary Factory Supercross Practice Tracks in California; a huge free roaming area with 9 amazing tracks, where most of the OEMs test their bikes.