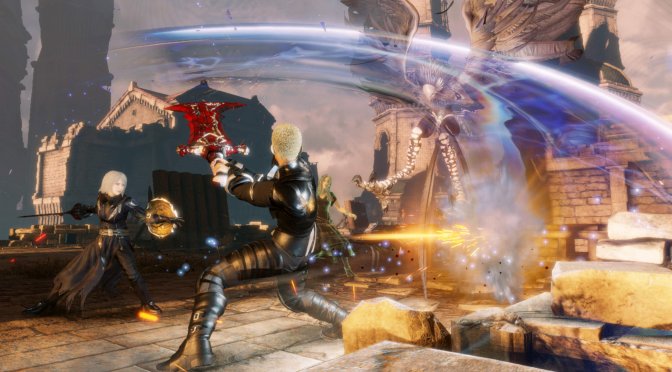 According to Square Enix, the game offers an alternate retelling of the beloved classic, shedding light on the dark origins of Garland through the journey of protagonist Jack and his comrades.

“Garland, who is defeated at the beginning of the story, is reborn 2000 years in the past as Chaos where he continues to rule over darkness, but is once again bested by the Warriors of Light… I created this endless cycle in the story because it was the first game in the series, and even though it is a pixel art RPG, I thought that by giving the story such layers, it wouldn’t just be viewed as some kind of “toy,” and we could elevate it to an authentic form of entertainment. That was the reason behind this decision. I think the same can be said for the scene when the player crosses the northern bridge, and the title and opening story text are shown on screen.”

“The story of FF Origin is told through the eyes of Garland. It’s quite exciting to see this story depicted through the villain’s perspective. I’m interested to see what kind of emotional impact
that the story of this game might have on players this time around.

As far as what happens to Garland… People who played the original FINAL FANTASY already know his fate, but I hope people will find appreciation in how this title portrays him.”

Invest time into the jobs available in #StrangerOfParadise #FinalFantasy Origin and Jack will soon unlock more advanced roles to play.

Will you become the definitive Jack-of-all-trades as a Red Mage, slice through the darkness as a Samurai, or get the Jump on foes as a Dragoon? pic.twitter.com/4gY1Cb9dds

In #StrangerOfParadise #FinalFantasy Origin Jack can switch between two jobs at the push of a button.

Whether your power lurks with the Thief job or hitting like a truck as a Berserker, there are plenty of different combinations to mix and match to better help crush your foes. pic.twitter.com/UB5eLbRMdJ

In #StrangerOfParadise #FinalFantasy Origin Jack's strength lies in his versatility.

Early in his quest, he'll have access to basic jobs like the fist-throwing Pugilist, the quick-footed Duelist, and the ax-centric Marauder.

Cross the bridge and begin a journey from Cornelia into prophecy.

In our Final Fantasy Birthday Celebration Live Stream we revealed #StrangerOfParadise #FinalFantasy Origin's new take on one of the original Final Fantasy's most remembered scenes. pic.twitter.com/m0TSXouWUe