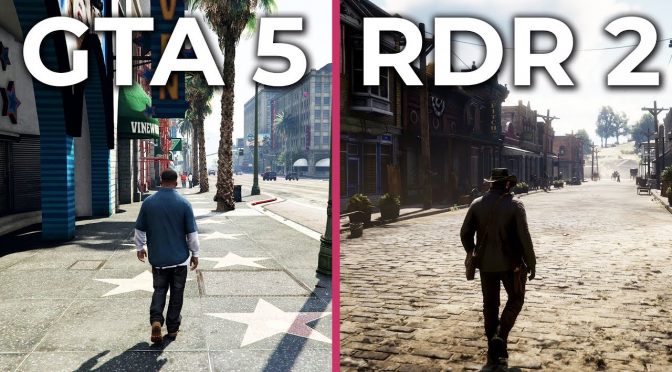 YouTube’s ‘Candyland’ has shared a pretty cool video comparison between Grand Theft Auto 5 and Red Dead Redemption 2. This video compares the exact same effects that are featured in both games like the mud, fire effects, ocean technology and more.

For GTA5, Candyland used the PC version which was running on Max Details in 4K and for RDR2 they used the Xbox One X version.

The first thing you’ll notice is the extra sharpness of GTA5 on the PC. For comparison, Red Dead Redemption 2 looks a lot softer and blurrier, something that will most likely addressed once – and if – the game releases on the PC.

Apart from that, it’s obvious that Rockstar has refined all the effects that were present in Grand Theft Auto 5. Fire propagation is a bit better in Red Dead Redemption 2, as are the melee combat system, the new snow deformation effects and the new dismemberment system.

The mud effects look impressive in both games and the ocean/water effects has been slightly upgraded in RDR2 (though you should not expect the incredible water/waves that Assassin’s Creed Odyssey sports).

The lighting system was also improved and the environments appear to have some extra depth, though RDR2’s blurry visuals make some environmental scenes look worse than the crystal clear image of GTA 5.

As said, it’s a really cool video and may give you an idea of what you can expect from a possible PC version of Red Dead Redemption 2 (unless of course Rockstar implements some real-time ray tracing effects in order to further improve the game’s visuals).