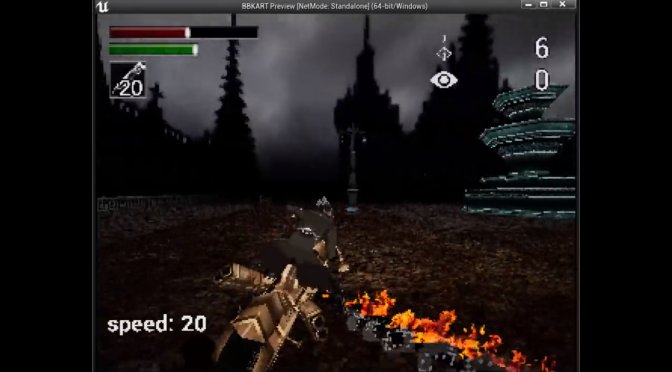 Last week, we informed you about Bloodborne Kart. Bloodborne Kart is a free fan game that will feature PSX-style graphics, and will be available on PC. And today, we are presenting you some gameplay footage from it.

Created by Lilith Walther, the developer behind the amazing PSX demake of Bloodborne for PC, Bloodborne Kart promises to be a fan kart game.

Do note that this fan game is in a very early development stage. Still, the following videos will give you an idea of what you can expect from it (visually).

The following videos showcase some early gameplay features. For instance, players will be able to use L2 & R2 to rotate the cam 90 degrees, or 180 if you press both. Additionally, the game will most likely feature destructible objects. You can also take a look at the game’s drifting mechanics.

As a small side project I converted the destructible objects to work with the kart. Right now hitting a destructible doesn't slow your kart down but I might change that in the future. pic.twitter.com/waTjoAygGk

Did a big polishing pass on drifting. Also, the camera will now only rotate when drifting as 'wiggling the stick' (d-pad) to charge the boost caused the camera to swing around wildly and caused motion sickness. pic.twitter.com/EMSm1gFhLi

This took a lot of work, but u can now 'air drift', meaning that if you drift off a ramp the drift will 'pause' until you hit the ground again (if the drift button has been held down the entire time) pic.twitter.com/jlh6HltYW3