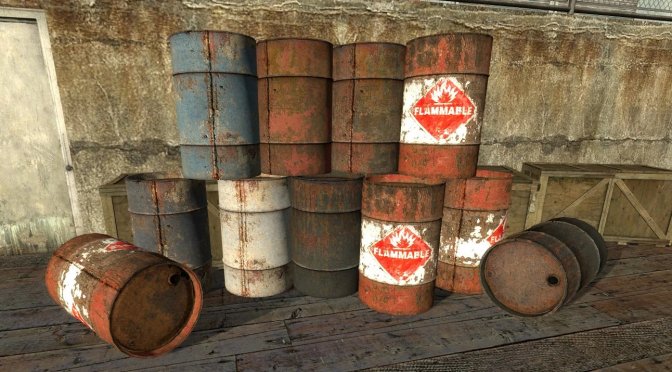 Explosive barrels have been a feature in video games for quite a while now, and still going strong. Who doesn’t like a bit of explosive action once in a while.

This feature started with DOOM, if I am not mistaken, and continues to exist in many games. First-person shooters tend to be the preferred candidates for explosive barrels.

If you play first-person shooters, or shooters in general, you most certainly already shot plenty of them by now. Explosive barrels usually help with the fiery eradication of enemies.

Some games use them also as a tool of destruction. Many games don’t even try to hide these barrels or give them a reason for conveniently being around.

Other games like Bulletstorm and Just Cause are even using explosive barrels as a core mechanic. Borderlands for example features explosive barrels with different elements. Half-Life 2 had rooms filled with red barrels.

Let’s be honest, we all like shooting them even if it’s being considered a cliché. As Ahoy said, “barrels felt good, they still feel good today”.

Explosive barrels will probably continue to explode in video games for a long time. Who knows, maybe even for ever.

You can watch the full video on explosive barrels below. Enjoy!