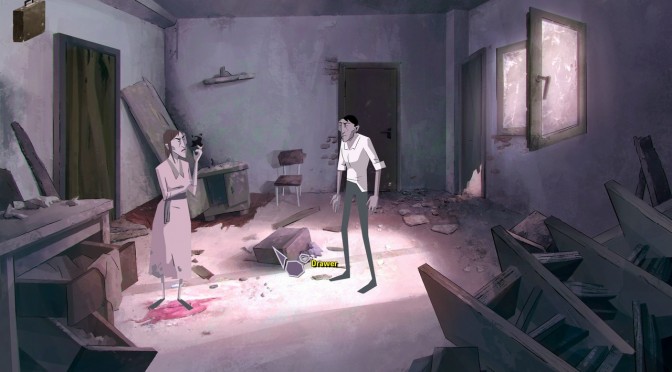 Fictiorama Studios has released a gameplay commentary video for “Dead Synchronicity: Tomorrow comes Today”. This video includes an overview of user interface and game mechanics, as well as some of the adventure’s key features, such as “dynamic close-up dialogues” and “DS-backgrounds”.

Dead Synchronicity: Tomorrow comes Today is a 3rd person, 2D point & click adventure and is the first title of the “Dead Synchronicity” saga. The game is influenced by LucasArts classics, but revolves around a more solemn theme, along the lines of games such as “I have no mouth and I must scream” or “Sanitarium”.

Here is what its story is all about:

“The adventure tells the story of Michael, a man with no past who is forced to recover his identity and decode the events that brought the world to a near cataclysm: “the Great Wave” (a chain of natural disasters) and a pandemic that has turned humans into “the Dissolved” (infected beings with special cognitive powers whose sick bodies will ultimately dissolve). If Michael does not hurry, he won’t be able to avoid the impending point of “dead synchronicity” when Time itself dissolves…”

Fictiorama Studios will launch a Kickstarter campaign for it pretty soon but until then, enjoy the gameplay video!