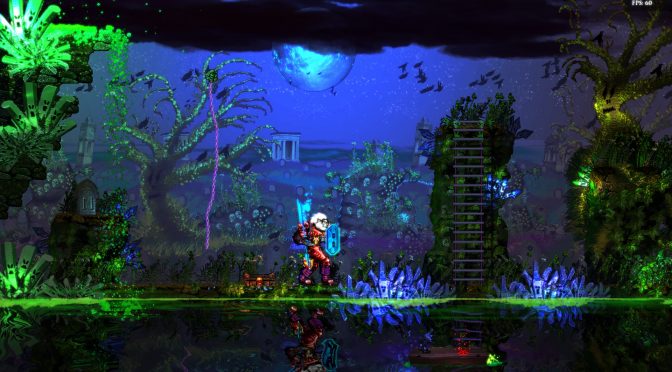 Kai Kubicek has informed us about a tech demo video for his upcoming 2D Action-RPG that packs some Metroidvania elements, Corpses ‘N Souls. This tech video shows off some of the features that the game currently supports, such as real-time 2D per pixel destruction, liquid simulation, interactive blood and more.

As Kubicek told us:

“I have been working on my own modern HD 2D game engine that has been built from the ground up for the PC and my game Corpses ‘N Souls. Both my game engine 2DEvolved and Corpses ‘N Souls are both solo projects being built by my self and are targeted for the PC(which is the primary platform target), PS4, Xbox One, Linux, Switch and Mac.”

Corpses ‘N Souls will feature progressive loot & crafting mechanics, tactical combat, spell-craft and adventuring, and is set in an intricately detailed sci-fi world. Its engine, 2DEvolved, is a multi-core game engine which also further leverages Hyper-Threading in Intel CPUs and supports both DirectX and OpenGL, as well as multi-GPU systems.

It looks really, really cool so be sure to watch the video!