According to a leaked slide and report posted by MyDrivers, it looks like AMD will support the next-gen PCI-Express Gen 5.0 standard and DDR5 by 2022.

AMD will have support for this standard with their upcoming next-gen “ZEN4” micro architecture, which will become available by 2022, if everything goes well as per the internal Roadmap. But INTEL would be the first to market the DDR5 standard with their “Sapphire Rapids” Xeon processor lineup, hopefully.

DDR5 standard has yet to arrive on a consumer level, but we can expect DDR4 devices to become mainstream by end of this year. Expect many DDR4 compatible devices for the consumer Gaming segment as well, Motherboards, GPUs, SSDs. AMD’s upcoming “ZEN 3” micro-architecture, which is scheduled for 2020, with a market presence in 2021, is expected to stick with DDR4, LPDDR4x, and the PCI-Express gen 4.0 standards.

So by 2022 GEN 5.0 should hopefully enter the mainstream market. DDR5 will replace the 5-year old DDR4 memory standard. AMD will target DDR5 by 2022, along with support for USB 4.0 standard. Make a note that PCI-Express is backwards-compatible, which means if you have a PCIe 4.0 graphics card you can use it on a motherboard designed for the PCIe 3.0 interface; however, the card’s available bandwidth would be limited to the capabilities of PCIe 3.0.

Similarly, a PCIe 3.0 card will fit in a PCIe 4.0 slot, but again it is going to be bandwidth limited by PCIe 3.0. AMD will transition to DDR5 by 2022 with ZEN 4, bringing with it a host of devices for the consumer as well as enterprise market. ZEN 4 CPUs are not the only ones to get support for DDR5, as Laptop chips with LPDDR4x and ZEN 3+ APUs will also have support for this standard.

Leading DRAM manufacturer such as SK HYNIX has already hinted for a mass production of the next-generation DDR5 memory by 2020. DDR5 memory speeds can reach speeds up to 8400Mbps (8400MHz), and a single DIMM can support 128GB, while consuming less power.

Besides there being a generational bandwidth doubling with PCI-E  GEN  5.0, the standard is expected to introduce several new features that will help with the enterprise and consumer segment, benefiting compute and scalable processors, such as AMD’s CDNA2. INTEL has already introduced some of these features with its proprietary CXL interconnect.  When it comes to USB4, it is actually just a variant of Thunderbolt 3, with speed of 40Gbps.

DDR5 will also enable data-rates ranging from 3200 to 8400 MHz, and densities such as a single-rank 32 GB UDIMM, and a new physical layer feature such as “same-bank refresh“. Expect an increase of bandwidth when compared to the upcoming DDR4.0 standard. 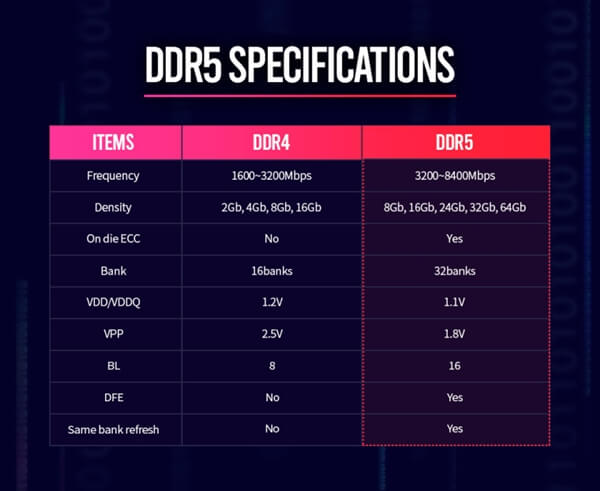