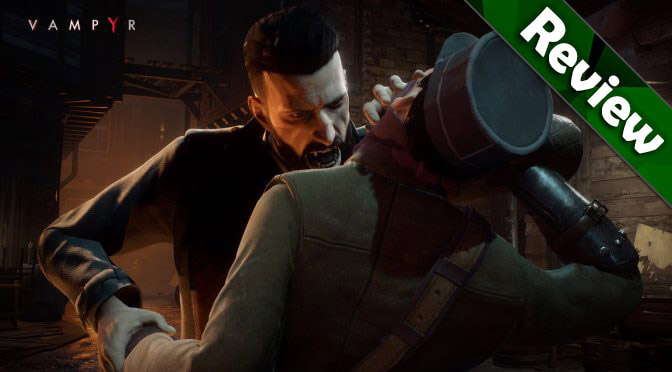 Despite the enduring allure of vampires, only a handful of quality vampire video games have ever been made. Of these, most have been action games with limited depth and meager stories. In fact, the case could be made that 2004’s cult classic Vampire: The Masquerade – Bloodlines is the only video game to truly let players become a vampire, with all the power and responsibility that entails.

Hence, some 14 years after Bloodlines the stage is set for Dontnod Entertainment (Remember Me, Life is Strange) to release Vampyr, an intelligent role-playing game claiming to offer a true vampire experience built around choices and consequences and set in a fantastically bleak 1918 London. For vampire devotees the thirst is there, but can Vampyr deliver?

Happily, Vampyr does indeed immerse the player in its despairing plague-ridden night-world, wherein you interact with truly interesting and varied characters each with lives and motivations. This is a world worth investigating, in large part thanks to the absolutely top-notch voice acting and believable dialogue. As you converse with various individuals you will try to collect hints to piece together each character’s true story and motives, in an attempt to help and heal. Which brings us to who you are.

Vampyr begins by placing you into the role of Dr. Jonathan Reid, a medical doctor or some renown turned vampire by an unknown power. Dr. Reid’s truly phenomenal performance deserves special mention. He is an astoundingly brilliant main character, transporting you, nay mesmerizing you into the role of good doctor turned vampire. As he speaks, one feels his burning desire to help and heal and learn and grow. And this melding of vampire and healer is a truly unique angle previously unexplored in gaming.

“Nothing good can come of fighting who we are.” – L. Ashbury

Beyond the medical aspect, Vampyr’s main appeal is in Dr. Reid’s internal struggle between the humanity he cherishes and inner-monstrosity threatening to consume him. The game clearly understands this struggle, even labeling it “Blood Temptation” and explaining you must choose whether to give into the urge to kill for blood (experience points!) or to be true to your beliefs as a doctor. Vampyr is at its best when grappling with these issues!

There are other various gameplay mechanics like a simple but effective crafting and upgrading system mainly fueled by looting corpses and scrounging around in the environment. The skills system is also very basic, but gives you a few choices regarding upgrades. It’s all effective enough.

Visually speaking, the game has a painterly style with a dark brown and black tone. The environments do a fantastic job conveying the bleak mood, and the overall art style will be appreciated and applauded by most. The music and sound sets the mood quite wonderfully, with somber strings and haunting chants as you feed on NPCs for example. So kudos to the art and sound teams.

So far, so good, but we haven’t discussed the other half of the game. When not role-playing, solving medical issues, reading notes, and conversing with fantastic characters, Vampyr devolves into lackluster exploration and borderline horrible combat. And then there’s the issues, so many issues. Bleh!

“What is life but death pending?” – Mystery Vampire

Let’s talk about the dreaded combat. To the developer’s credit, it’s clear they wanted a sort of Dark Souls or Witcher 3 system of deadly encounters requiring precise timing and stamina and item management. What they delivered is clumsy and awkward, laden down by janky animations, poor targeting, bad hit detection, and very floaty movement.

To summarize the combat, instead of a foundation of depth and balance, the whole affair is built upon whether you or the AI can better exploit the game’s issues. The bosses in particular are obnoxious. It’s a huge mess, but at least the combat gets fairly easy (exploitable) after the first few hours. No doubt the game could be appreciated by so many more players if the combat was solid and reliable, but sadly the combat is more of an unskippable tedium that breaks up the truly enjoyable role-playing and storytelling.

“Superstition and magic is just fact awaiting
the lens of science.” – L. Ashbury

The other issues pertain to interface issues, incomplete/broken keyboard and mouse implementation, text readability issues, and various quest logic and narrative inconsistencies. Update: I experienced crashes to desktop and hard locks and black screens every few hours on my Intel/nVidia setup, but several AMD users seem to have had no trouble. Still, stability may be an issue for some.

Regarding the mouse, you cannot move the camera around during dialogue like you can using the right analog stick on a controller, so often you are stuck with a bad view. During dialogue the actual subtitles are inexplicably broken up into multiple segments, so you can’t read ahead properly to save time, which is more frustrating than it seems. There are no keyboard shortcuts for dialogue options, which is also needlessly obnoxious.

Being a choices and consequences game, Vampyr needs to be replayed to appreciate its narrative complexities, but at the same time the game just isn’t paced well enough to allow for enjoyable replays. If only all the terrible combat and backtracking could be removed after finishing the game once…but alas, if you wish to explore different choices you also have to endure the tedium all over again on a new save slot (yes, you only get one save slot per playthrough).

Overall, Vampyr is such a well-planned role-playing game…if only the execution didn’t go so astray. What we have here is a great intellectual story experience married to a fairly poor and often unfun video game experience. The floaty movement, winding pathways with no mini-map, broken combat, and dull backtracking will simply be too much for many players. Still, considering the only comparable game came out in 2004, this is a must-play for those who desire a truly immersive vampire game full of night creatures, moral dilemmas, secret societies, and vampire medical doctors!

Playtime: 30 hours total. Nick completed one playthrough in about 25 hours, leaving a third or so of the side investigations undone since the main story has a point of no return. He put another 5 hours into a new character and he’d like to play more, but a new playthrough is so tedious.