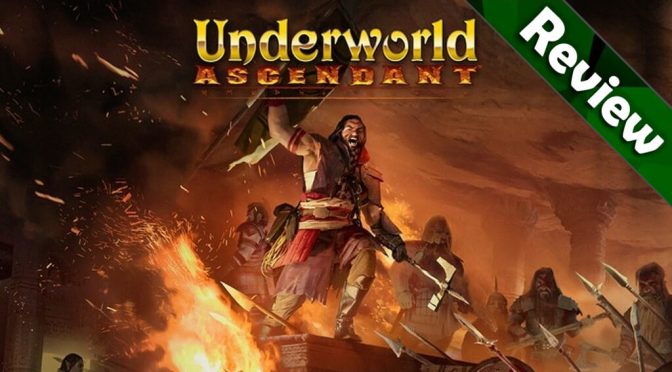 Underworld Ascendant is a first person action role playing game, developed by Otherside Entertainment. You might know the developers from the predecessors Ultima Underworld I & II. You might also know them as Looking Glass from other titles such as System Shock and Thief; games that even today are being held in high regard by many old-school gamers.

I personally fell in love with Thief Deadly Shadows. In fact, I love it so much that since then every custom character I create I name him after the game’s main protagonist, Garrett. Suffice to say that I had high hopes for this game, however it appears that all hope is lost. The game is a mess and I am really bummed because I doubt any amount of patches will ever fix this mess. Actually, this feels like an Early Access game, which is not unfortunately; and I will never buy an EA game ever again, screw that noise.

Since I haven’t played the previous games I am not familiar with the story and lore and honestly I could not care less.  The story is basic, the presentation awful and the writing is mediocre at best. The game does not have a proper save system and it only saves the item progress, not the actual gameplay progress. Therefore if you quit the game or die you will start from the beginning of the level and the game will reset everything like traps, puzzles and enemies; basically the save system is a complete joke.

Graphics are OK. They are nothing special and most people will probably find them outdated. Given its average-ish visuals, the game should run without performance issues, right? Well, it doesn’t. Try lighting something on fire and you will see your fps drop like a rock in the water. The graphic settings are extremely limited, there is mouse acceleration – and probably smoothing – by default and you cannot disable them (at least from the in-game settings).

Music and environmental sounds are fine, though again there is nothing extraordinary here, though I did like the main theme. Voice acting is OK ( it’s really not) I guess but only if you exclude the voice of the main villain who shouts in your ears like a drill sergeant through a voice changer.

The gameplay appears to be very similar to Dark Messiah and Thief but it doesn’t play the same; far from it. There is no character creation and there are no pre-made classes. Instead, there is a huge skill tree divided into three classic classes; warrior, mage and thief. There are no restrictions thus allowing you to invest points anywhere you like. I do not know if you can max out all the skill trees or if the number of experience points is predefined, but it is usually best to focus on a specific tree in order to maximize effectiveness with your weapon of choice.

I usually go for thief classes since I love sneaking around in the shadows backstabbing unaware enemies. I honestly though do not think that any of the classes really works as intended. First of all, the lighting is not ideal for this game. Even if you put out every single light source in a room it will still look bright thus destroying any kind of immersion while lurking in the dark.

If you are into the warrior class and prefer a more a straight forward approach unfortunately you will too be disappointed as the combat system sucks hairy and sweaty ass.

Animations are a joke and melee combat feels floaty, laggish, sluggish and lacking weight and impact; so basically crappy… hell, even the hit reactions are terrible. That is without taking into consideration that most enemies need like ten or more hits to go down. The enemy A.I. is terrible as well. Basically, you hit an enemy, back-step and hit him again until the chore named combat is done. The enemies are predictable as hell, making combat boring and tiresome.

The game has physics based puzzles but the physics are completely fucked. Walking past objects can send them flying like they are made of thin air. The water physics are also messed up making it sometimes almost impossible to traverse through it. I am not talking about lakes of water but puddles that are merely two inches deep.

I am extremely disappointed, sad and pissed at the same time. I honestly cannot apprehend how on earth they released this game in its current state. If you check the version/build number on the main menu you will see it is 0.3 something instead of 1.0. I mean, seriously?

The game is months or even years far from ready and it really makes me sad to see such great developers fall into the same trap in which many studios fell before (and most certainly others will again in the future). Usually, it’s the publisher who pushes to release a game at an exact date and I believe the very same thing happened here.

Actually, some buyers could see this as a scam and to be honest they could be right. Whatever the case might be my recommendation is to stay far away from it, at least for now.

This could have been an awesome game and I did try to like it but unfortunately in its current state it’s impossible to enjoy it… even if its core idea is great. Hopefully, Otherside will work on it and it will release an enhanced/definitive edition in the future. Till then save your money for something else. On an unrelated note, and since this will be my last review for this year, I wish you all Merry Christmas and a Happy New Year. My best wishes to you, to your families and to your friends. Enjoy the holidays.

PS: The latest patch did fix some minor things and the studio released a video saying that they are working on the issues. Time will tell. You can find the video on their official YouTube channel.