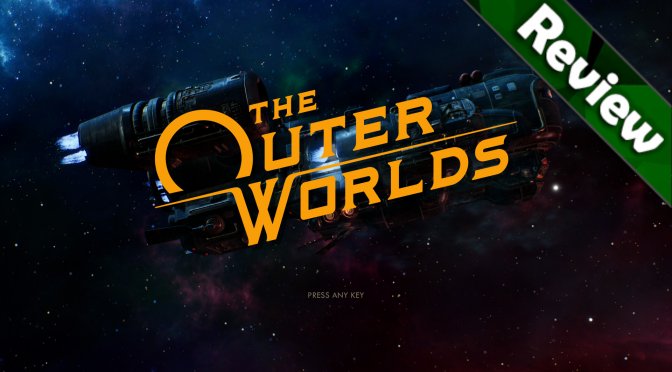 With a resumé that includes South Park: The Stick of Truth and, of course, Fallout: New Vegas, do I really have to introduce Obsidian Entertainment? Their unapologetically wacky and satirical development formula has cemented several memorable titles into our libraries, and with The Outer World’s they finally got to unleash their unique style on the wild frontiers of space colonisation.

I have a dirty confession to make: I never played Fallout 3. I was just too deep into all the Elder Scrolls stuff at the time. However, I did give New Vegas a shot and the game’s writing, characters, and overall devil-may-care tone made me play it in big, greedy chunks at a time. Needless to say, I expected The Outer Worlds to scratch that same itch since this game is something like a homage to New Vegas.

After spending my time with Obsidian’s latest RPG, I have no doubt that The Outer Worlds wears its developmental pedigree on its sleeve. There is something delightfully ‘old-school’ about how it handles itself, and even with a few minor grievances, The Outer Worlds has a special experience to offer.

I don’t get why so many previews had branded The Outer Worlds as a space opera. Mass Effect (1, 2, 3 and that crappy one) is a space opera because you have all the intergalactic politics, personal drama and aliens from different races mashed into one big epic. The Outer Worlds, on the other hand, is obviously more casual in its execution since you are essentially a space cowboy thrown into the set of 1960’s sci-fi B movie. It is more Cowboy Bebop than Star Trek.

After once again spending a little too much time with the surprisingly decent character creator, the adventure begins and I discover that I am part of a stranded cargo of colonists in stasis, onboard a ship that experienced a malfunction during light speed. A shady-looking fella named Phineas Welles then unexpectedly lands on board and essentially kidnaps one of the pods – namely me– before making a quick getaway just as the authorities arrive.

Turns out old Welles has got a bit of the (mad) scientist thing going on because while most people who spent this much time in stasis pop like microwaved egg upon revival, this guy figured out a way to bring people back alive. He only had enough ‘chemicals’ for one person though, and there is still an entire frozen crew floating back on board, so he abruptly sends the player down to the nearest colony in a pod to get more.

It was supposed to be a quick trip down to Edgewater colony, hooking up with a smuggler, and returning to Welles so he can get to work on the rest of the colonists. Yet from the moment the player stumbles from their escape pod, things immediately turn sour since the ship needed to return to Phineas is missing a crucial component.

Oh, and your contact kind of got smooshed with your landing pod so you are basically on your own. You then become Clint Eastwood – the gunslinger lone ranger – finding himself just passing through a little town but inevitably getting dragged into the bigger scheme of things.

So you do what any resourceful space cowboy would do: Befriend the locals, and help them out with a few mundane favours on their neglected little space colony in the hope that they will give you the parts you need. You gain a few weapons, make some bounty hunting money, convince a tyrannical mayor to be nice and pick up a few stragglers who eventually become your crew. The usual.

In no time, you and your new band of misfits fixed up the ship, leave Edgewater in your rearview mirror, and the frontier of space is now your oyster. Of course, it turns out that Phineas Welles’s motivation for defrosting the crew is to take on a deep space colonisation conglomerate named the Halcyon Holdings Corporation, and he has just found his newest lackey.

If I were to describe the basic gameplay in The Outer Worlds, it would probably read like a review of nearly a hundred other RPG’s. This is a testament to how Obsidian have thrown together something that plays it very safe, and gives The Outer Worlds has a familiar but solid foundation.

Missions generally adhere to the classic routine of you needing something from NPC’s, and they are willing to offer it to you in exchange for a small favour, which usually ends in your guns doing all the talking. It is the old, ‘I’d do it myself, but [insert excuse here] prevents me so would you kindly’?

Obsidian even went for the whole talking head thing against a blurred background from New Vegas, and I could swear they simply extrapolated the same lip-sync technology from Bethesda’s older games. Why is there no anti-aliasing on their teeth though? Did they copy the actual teeth from New Vegas too!? Ew! 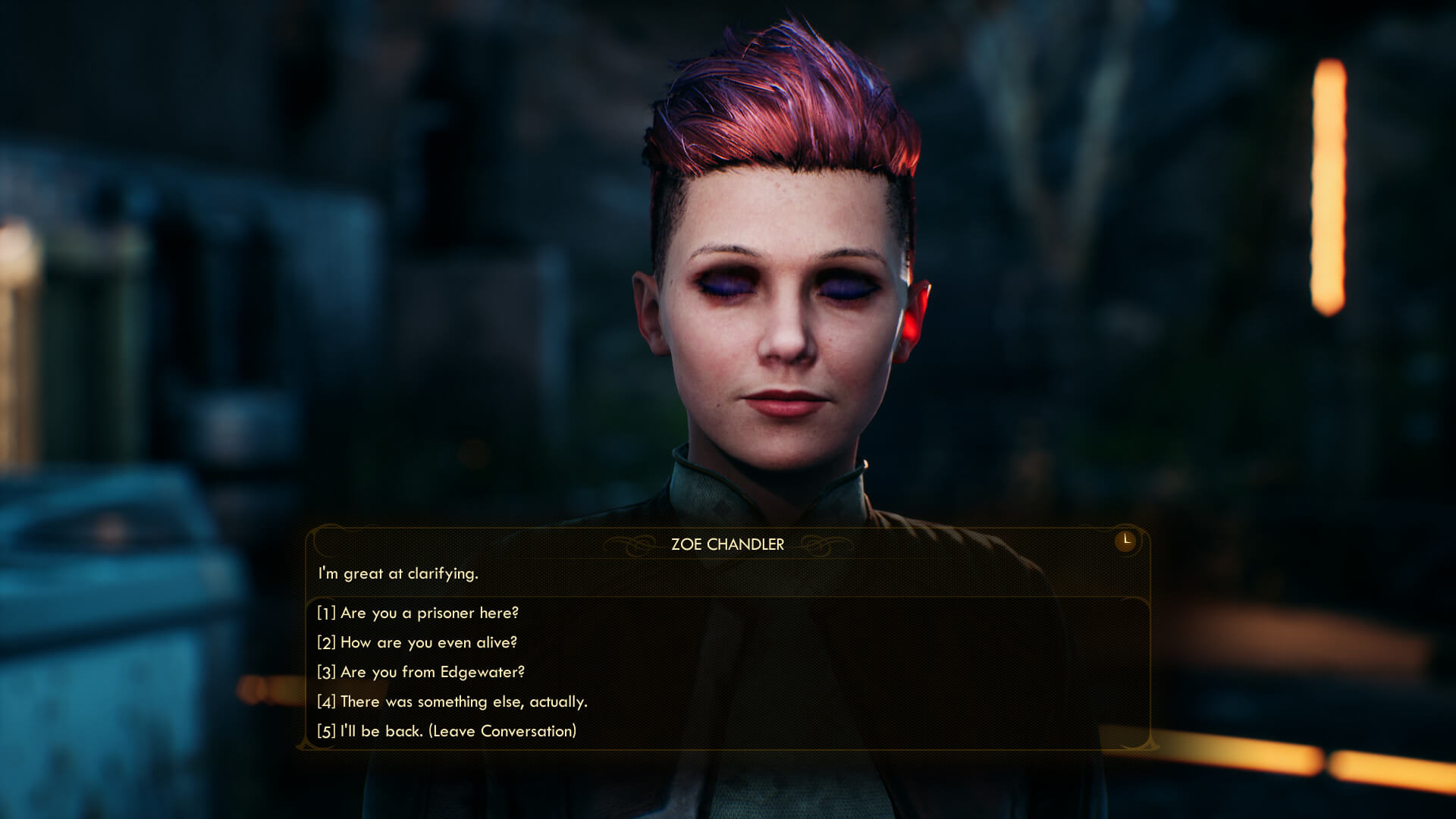 As the player moves between the handful of colonies that represent the areas you can visit, and once they get involved with the humdrum of the settlers, Obsidian goes ahead and does their thing. From the conversations you have with NPC’s to the world building at large, everything in The Outer Worlds is wholeheartedly steeped in a sardonic, black humour.

You see, in the era of space colonisation Halcyon Holdings did what any corporation would do if they had monopoly over settling on other planets, namely capitalise everything, including their employees. As a result, the game acts as a broader satire on preposterous corporate legalese.

Many reviews have mentioned the grave digger you encounter as you enter the first colony who explains that inhabitants of Edgewater literally have to lease their own graves (as a commentary on how the bureaucracy cannot be avoided even after death).

My personal favourite early in the game was chatting to an NPC in a factory where they put something called ‘saltuna’ into cans (apparently it’s not fish). I was supposed to pick up a fee as a favour to the grave digger, but during our conversation I figured out she was sad over a bunch of paperwork. Seems she is the closest living relative to a person who had just committed suicide.

Was it her brother or something? No, she informed me, she was the closest living person relatively speaking when this worker shot himself. Considering that the factory basically owns him, she has to file a report on vandalism to an asset. 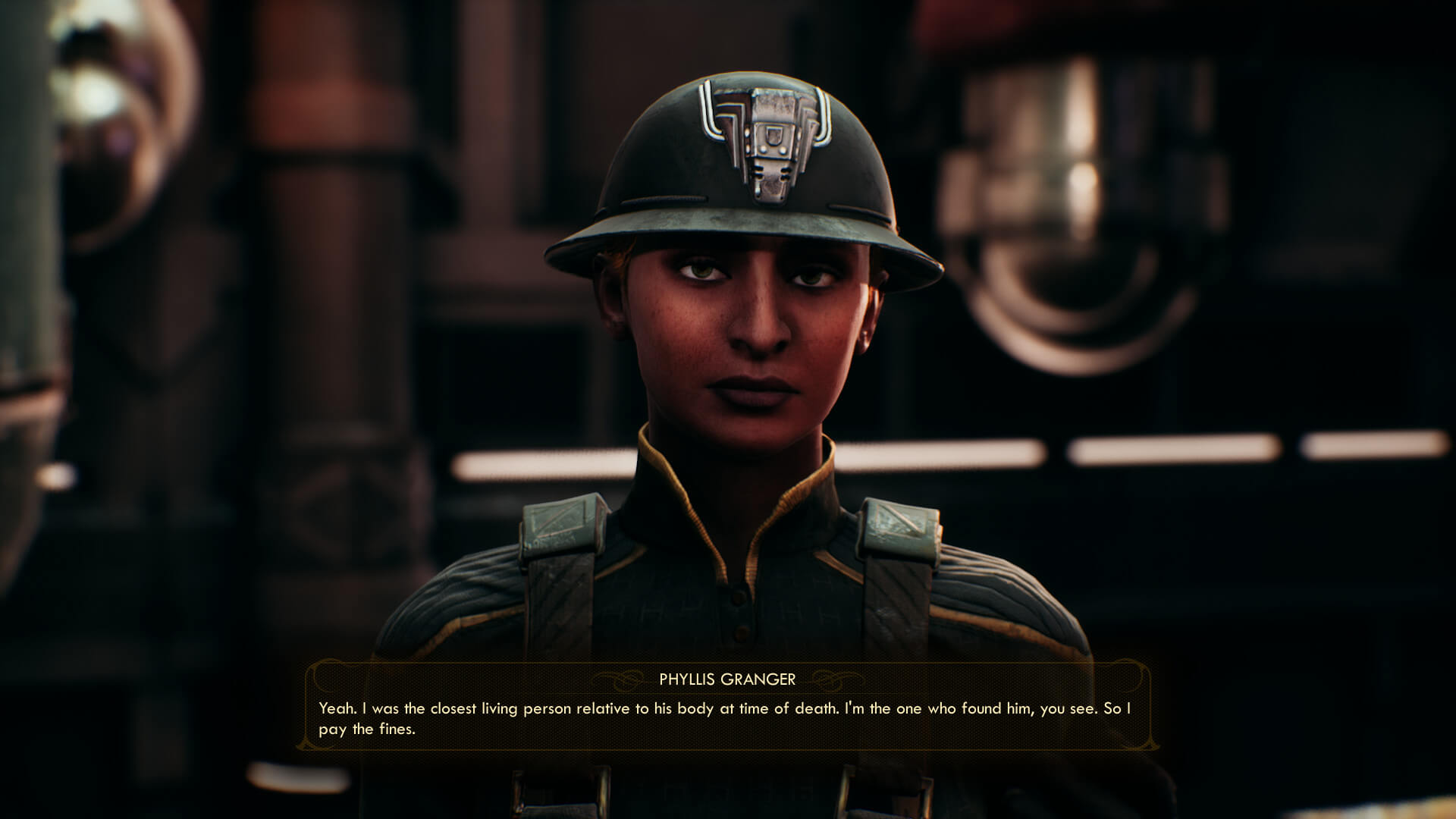 This little interaction is emblematic of the general tone of black humour that Obsidian have endowed upon their entire game, and it is consistently supported through superb writing. You can see it everywhere from the quirky messages found on random terminals scattered through the environment, or the ridiculous culture of capitalism that has taken over the colonies. “It’s not the best choice, It’s Spacer’s Choice!” is the actual slogan of a particularly large interplanetary goods provider.

Yet the writing shines at its brightest in the dialogue between the player and the NPC’s. Their lines have been composed in a very natural and engaging format, and they have been executed by voice acting that never tries to be overly dramatic.

I felt like I could actually have a proper chat with certain characters, and I even returned to the suicide lady at one point because I couldn’t wait to tell her when I discovered something about her co-worker. She was genuinely thankful for the news too.

Furthermore, players who frequent RPG’s would notice that The Outer Worlds often presents an above-average number of dialogue responses when you engage with NPC’s. You can be the kind and caring, paragon type of captain that always speaks with gentility, or you could basically be Bender from Futurama and be as belittling and demeaning as you want. I even gave a space station engineer the finger that one time… with both hands!

If you read my stuff, you know that I glorify the Unreal Engine 4 to a point where most would think I am some sort of undercover shill. However, my admiration has hit something of a rupture with The Outer Worlds as this game needs TLC in the optimisation department.

Visually, the game is above average, decent even. Obsidian have really committed to this spaghetti western meets 1960’s sci-fi B movie look (complete with shrink ray!), so the styling of the levels is very palpable. Aside from those jaggy teeth, the characters have been rendered with surprising detail, and The Outer Worlds manages to feel distinct enough to set itself apart from most RPG’s that have gone this route.

Technically, the game needs some work. The frame rate could/should certainly be much higher, which tells me Obsidian needs economise by culling assets not rendered on-screen. This is further worsened by some really terrible texture pop-in. In some areas I would often wait in one spot for all the visual assets to finish rendering, only to find more pop-in once I started walking forward.

The combat was also insipid at times. The player will be give access to a decent selection of guns, heavy weapons, melee weapons, and armour all accompanied by stats that players can modify or enhance at workstations. You can tell whoever was the designer lead on combat plays a lot of games like Destiny or Borderlands.

In this case, however, enemies just end up feeling a little bullet spongy when the weapons’ fire power is based in stats. You blast them with huge balls of energy from ray guns, or you zap them with crackling bolts of electricity, but their health bars barely drain. Occasionally, their AI also does that ‘Bethesda’ thing where they run to a certain place, and become permanently rooted to the spot while the player is free to empty their entire clip at them.

These are more like frustrations, however, rather than total deal-breakers. The Outer Worlds remains an appealing game because RPG’s nowadays rarely invest this much in their moment to moment gameplay. Publishers tend to fixate on the overall experience, which means that the smaller side quests and routine character encounters become generic, bland filler.

As such, The Outer Worlds is the kind of controlled and condensed RPG that I like. This game will set the average player back roughly 30 hours with some change, but there is all the world building, character development and stats manipulation that you can expect in games that are three, even four times longer. Let’s face it, Bethesda has forsaken us, and if Obsidian is the kind of developer that aims to replace them, things are looking up.