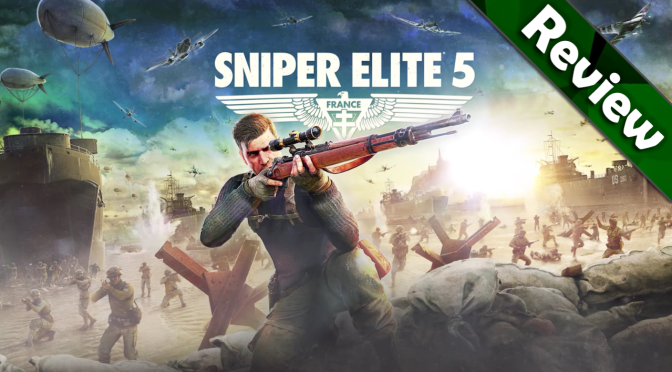 I’ve always been a fan of the Sniper Elite franchise since the release of the original game in 2005. I played its second and third parts years ago, and its fourth part about two weeks prior to the release of SE5 (so that I could make an apt comparison between the two). And in a nutshell, and to no one’s surprise, it’s more Sniper Elite, but with a few tweaks and changes.

The story has never really been the main focus in the series, and certainly has never been its strong point. This time, the game takes place in France, and revolves around a new secret weapon being made by the Nazis, called the Kraken. Thus, it’s your job to, basically, destroy it.

My biggest issue here is with the mid-mission cutscenes which I don’t think add anything to the experience. On the contrary, it serves to highlight the already weak aspects of the game, the voice acting, the lip-syncing, and the boring characters. It also seems Rebellion ham-fisted in some “representation” for good measure, because of course they did. Or perhaps I’m reading too much into it…

As said, the story or characters have never been the highlight of the series. So while these elements are not great, they did not detract too much from the experience; you can easily skip/ignore them. To quote Vasquez from Aliens “Look, man. I only need to know one thing: where they are.”

The gameplay loop remains mostly the same. If you’ve played Sniper Elite 4, you know what to expect. The game has a big open map with numerous ways to complete its objectives. Comparisons between it and Hitman are inevitable, and Sniper Elite 5 feels like a shallower version of it.

For a game called Sniper Elite, I spent at least 50%  of the time (if not more), sneaking around using a pistol or melee to kill enemies silently. Again, this was to be expected as Sniper Elite 4 played the same. When it comes to sniping, you’ll have to find a sweet spot, a generator or use recurrent levels sounds to mask your shots and take out as many enemies as you can. You will then have to move to the next location and do the same thing again. At least you can set up traps and attract your enemies to the location which is quite fun as well.

The x-ray shots are back, but I don’t think they were as impactful or enjoyable to watch as in the previous game. To be honest, I ended up turning them off. They did add the ability to slow down time during these events, but it’s a feature I rarely used.

Rebellion also removed the trip mines and replaced them with shoebox mines which are non-lethal (I’ll talk about the non-lethal aspects in a bit). You can also find decoys, and you have the ability to mod weapons at workbenches scattered throughout each level. These workbenches unlock new mods for various weapons when you find them for the first time, and also allow you to mod each weapon or switch your loadout mid-mission. This design choice locks attachments and weapons behind campaign progress though.

There are also a few different ammo types, some of which were also present in Sniper Elite 4 (armor piercing, Subsonic, Suppressed, non-lethal etc). I personally used the armor-piercing since it appeared to be the most useful and meaningful type of ammunition. Also, and as with the previous game, I never really found a use for the subsonic or suppressed ammo. The pistol starts with a silencer, and the submachine gun can be modded with a silencer as well (once unlocked). In fact, you can even attach a silencer to the sniper rifle, though you lose a lot of range. I personally ended up sticking with the initial loadout and just modded the 3 weapons I started with (as their stats suited my playstyle). There are of course a number of other rifles, submachine guns and pistols to choose from,  which can also be modded. And while the developer was boasting about the thousands of possible combinations and even though it sounds good on paper, the practical impact of these combinations is likely quite small in the big picture.

The addition of non-lethal mines and ammo struck me as somewhat strange, and I’m not actually sure why they chose to take that route. It makes sense in a game like Hitman, but not on a sniping WW2 game. It adds of course some “replayability”, as well as a challenge for completing missions non-lethally, but honestly, it just feels out of place.

There is also a helmet mechanic now. So shots will “bounce” off the target’s helmet and knock it off, meaning that you’ll have to take a second shot in order to kill them.

Missions work similarly to those found in Sniper Elite 4, though you can now find optional objectives by finding new intel or by just exploring the level. There are a total of 9 missions in the game, and 1 DLC mission, so it will take you around 25-30hours to get through it all (obviously depending on how you play and if you do the side/optional objectives).

Rebellion has reworked the game’s skill system. There are currently 3 trees (combat, equipment and body). Leveling up your character unlocks skill points that you can assign to one of these trees. Unfortunately, though, I found the majority of these skills to be entirely useless (at least if you’re planning on being stealthy). Aside from the ones that allow you to carry more equipment or ammo types, the rest seem pretty focused around other abilities, like taking more damage, throwing back grenades, reducing scope shake from taking damage, enemies being tagged when they damage you, focus mode (read wall ha….I mean x-ray vision which I never used once). I played on hard mode, and didn’t really encounter any major challenges. I never actually took any damage, unless I was careless. I suppose if you plan on running and gunning, some of these may be more useful, but even then, the game is incredibly easy, and unless you are playing on the hardest difficulty, not having these skills will make very little difference in my opinion.

The AI in the game is really dumb, though it has been improved slightly over the previous game. It’s entirely possible to just sit in tall grass and kill an entire group of enemies without them spotting you.  Similarly to other games, they will investigate a pile of bodies and then move on as if nothing serious happened.  Of course when alerted, enemies will search around a bit, before returning to their normal/neutral behavior. At the other end of the spectrum, though, AI can magically know where you are in some cases. So yeah, the enemy AI can be a bit inconsistent.

There are a number of multiplayer modes this time around as well. The Co-Op mode allows you to play through the entire campaign with a friend. Then there is the Survival mode; a wave-based mode for up to 4 players. We also have a PVP and an Invasion Mode. Invasion allows other players (or you) to invade other players’ games and counter-snipe you/them. Furthermore, the german snipers can use phones in certain locations to locate the allied snipers. As soon as this happens, though, the location of the german sniper will be also revealed.

It’s an interesting idea, and I’m sure some will enjoy it. For me though, Sniper Elite is not a game for PVP matches. When I play a game like Sniper Elite, I want to take my time and enjoy the stealth gameplay, plan my way through the level and complete the objectives in my own time. Nevertheless, this isn’t a bad addition and can be quite fun for a while.

Although I played through the entirety of Sniper Elite 4 in co-op, I played Sniper Elite 5 solo (as I had no intention of playing with randoms, and I don’t have any friends who play the game). Still, I’m pretty sure that since the core gameplay is effectively the same for both titles, the co-op experience will be the same.

The inclusion of a multiplayer PVP mode is odd. It seems like they added it just to tick a box. Perhaps I’m wrong, but if I wanted to play a PVP shooter/team-based shooter, there are plenty of better options out there than Sniper Elite.

Sniper Elite 5 is a far less polished experience than Sniper Elite 4 as I came across several issues during my time with the game. For instance, I got stuck on terrain a few times, which required a reload, there were animation glitches, my character could clip through the terrain, and I experienced AI glitches and camera issues. Thankfully,  though, none of these were game-breaking issues. Still, they are quite annoying as they occurred frequently. I really hope that Rebellion will at least resolve some of them.

The performance for the most part was fine, but I noticed framerate drops during kill shots and specific areas of some levels. Turning shadows down from Ultra to High seemed to fix most of these issues. Now while the game is graphically better than the previous game, I don’t think its graphics justify performance dropping to 40fps on an Intel i7-12700k with an NVIDIA RTX 2070 SUPER at 1080p. Thankfully, though, I never experienced any crashes so that’s a plus.

There is also no option to change the HUD for the sniper scope, even though there was one in Sniper Elite 4. While it may not have been realistic, there are plenty of other aspects of the game that are not realistic, so why draw the line here? I really enjoyed the T-post tactical scope to calculate my shots since I tend to disable all aim assists (because what gratification or reward is there for the game to aim for you?).

Another issue is the invisible walls throughout every level. It’s very inconsistent and hard to tell what is or isn’t accessible. Some low walls can be hopped over, others cannot. There is no distinction.  I think that the developers should have, or should, make it more clear. There were plenty of times I tried to access certain areas only to find that I was magically prevented from doing so.

Despite the Sniper Elite games always being somewhat clunky, I’ve mostly enjoyed them. I love stealth games a lot, and this does scratch that itch to an extent. It does, however, still suffer from the same issues that were present in Sniper Elite 3 & 4. Dumb AI, clunky controls and a weak story. I didn’t really like the updated x-ray kill cam system, and the non-lethal option just seems out of place as I mentioned earlier. Despite these issues, though, I enjoyed it. It’s an improvement over 4 in some ways, but also a step back in others.

If you’re not a fan of Sniper Elite you can safely pass on this,  or give it a try on Gamepass. Even if you are someone who enjoys the series, I would recommend waiting for a sale or trying it on Gamepass.