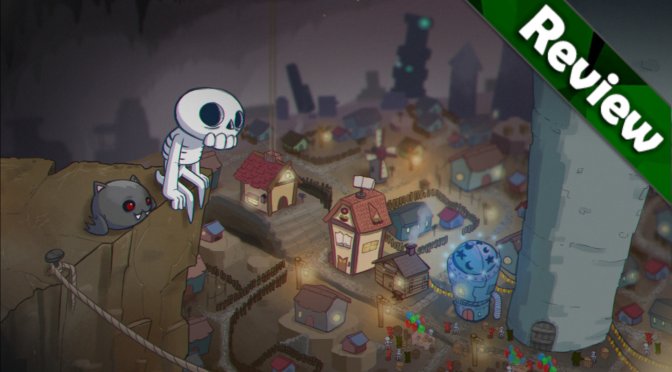 My ultimate guilty pleasure of low IQ YouTube content is gamer rage compilations. Seeing a cocky streamer instantly reduced to an infant-like hissy fit after a big ‘Game Over’ screen soothes even my worst days. However, as these poor fools decimate their expensive peripherals, consoles and monitors, I realise that I have fantasised about doing the same many times: There exists a subset of games that are just hazardous for the lifespan of your gaming hardware, and Skeleattack is a new offender.

Skelattack is a platformer from a relatively new studio named Ukuza, and it is certainly the kind of game that demands a high level of reflex functioning from your central nervous system. In line with a recent trend of titles like Shantae, Celeste and Cuphead, Skelattack aims to offer the same variety of unforgiving platform gameplay cleverly disguised by cutesy, hand-drawn graphics.

For the most part, Skelattack succeeds admirably and as the credits rolled I filed the game under the ‘short and sweet’ category in my mind. Nevertheless, I cannot shake the feeling that something is missing here.

The most interesting part of Skelattack is actually the game’s publisher: Super Mega Evil Corporation for World Domination, or known by their nickname as ‘Konami’. Better believe it folks: After axing their golden boy, ruthlessly hunting all who dares utter the letters “PT”, and humiliating fans with a misjudged Contra Rogue Corps, one of the most bloodthirsty publishers in our industry came full circle back to the very genre they helped establish back in the 80’s. Go figure.

In Skeleattack, the player takes on the role of an amnesiac skeleton, named Skully, and occasionally his leathery-winged buddy, Imber. Our skeletal protagonist and his batty friend live in what I assume is some sort of land of the dead since bonies are everywhere, and they even made a wobbly, wooden pub with a skeleton jazz band!

While all is generally peaceful and jovial in this underworld utopia, an invasion by humans puts an end to the tranquility of Aftervale. It seems those marauding fleshies are after the Blue Flame – a powerful magic keeping the netherworld intact, which the human beings intend to use as a remedy for their dying king.

Thankfully, Skully is an agile hard-arse (no pun intended) with a sword, and since his batty little companion endows him with extra abilities, the dynamic duo make the logical choice to defend the afterlife against the human invaders.

The story mainly serves to move along Skully and Imber’s progression, and it gets the job done, but the only way to experience the narrative is by clicking through hefty chunks of dialogue with NPC’s found around the game’s world. Indeed, the writing is snappy and filled with tons of humour, but I don’t think I have ever read this much text in a platformer game.

Skelattack takes a minimalistic approach to gameplay mechanics since the player can run, jump, and Skully has access to a quick sword attack reserved for dealing with baddies. This may seem basic, but the assemblage of staple environments set in dungeons, lava caves and haunted castles can only be conquered by a player who gains a decent level of skill with these controls.

I had to get creative with double jumps and wall slides to conquer the really tricky sections, particularly because Skelattack is filled with MANY hazards that will… erm… ‘kill’ Skully with a single touch. However, there is virtually no penalty for flubbing a difficult jump given that the little skeleton and his bat will simply respawn with full health at the last blue lamp they passed. The only real punishment is a random sign located in some of the hub worlds, which keeps a mocking tally of your death count.

There are also several mechanics that makes Skelattack’s gameplay sail really close to metroidvania territory, such as a map that allows fast travel, a world that unlocks progressively and a few abilities that can be unlocked to give Skully an advantage against enemies. Sadly, the developers never really committed to these elements, and they feel more like an afterthought tacked on at the last minute.

What’s more, Skelattack has a very simple set of upgrades that Skully and Imber can unlock so the effort rarely seemed worth my time. This is particularly because upgrades are terribly expensive, and there are many, MANY insta-kill traps all over the game’s world just waiting to make your collecting seem futile.

There are also sections which, as mentioned, you play as the bat, Imber. These were by far some of my least favourite moments in this game, and my issue can be summarised in two words: ‘Flappy Bird’.

Going out on a limb

It is painfully obvious that Skelattack was originally envisioned to be a much bigger, more complex metroidvania title, and I wonder if Mr Corona Virus is somehow responsible for stunting this game’s ambition. As such, not all the elements make a lot of sense, and the adventure of Skully and Imber could have been more memorable if it played out more like a stripped down, side scrolling platformer, with levels presented as linear, segmented missions.

Nonetheless, Skelattack still offers a rewarding experience for players willing to commit to the platforming gameplay. The controls are tight, the characters are likable, and it celebrates that unique caliber of skill that defines these type of games. While other, more refined metroidvanias would still be my first choice, Skelattack will surely please players who decide to get the game when the sales come around.