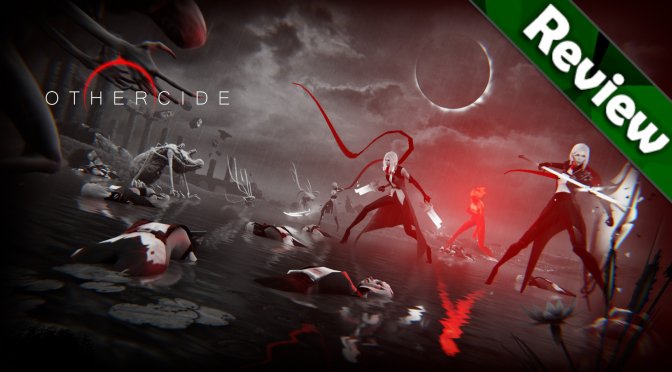 Isn’t Focus Home Interactive just amazing? They are one of the last major publishers still working consistently with smaller studios to release unique I.P.’s. If ever the endless stream of AAA titles start  to feel like clones off the factory line, playing something from Focus Home Interactive never fails to offer a refreshing experience. I therefore feel a little guilty for posting this review of Othercide, the latest game under their production.

Developed by the studio Lightbulb Crew, Othercide is fundamentally a roguelite release that plays out within the tactical, turn-based genre. The game therefore aims to combine that intensive strategical thinking you can only get from turn-base combat, but the possibility of loosing all progress and character development raises the stakes.

While numerous other studios have given us great games from an creative use of this formula, Othercide somewhat misses the task. At its core, this is a well-rounded and engaging turned-based RPG which is all this game needed to be, but Othercide makes the most detrimental mistake of a bad roguelite title: Inconsistent difficulty.

The result is that Othercide’s progression feels like a square peg forced into a round hole because the roguelite mechanics never really feel as if they serve  a purpose. The gameplay lacks the  feature of randomly generated experiences that a good roguelite thrives on, so even the gorgeous visuals inevitably loose the battle against the increasingly obvious sense of repetitiveness.

Othercide plays out within in a sombre, plague-infested city where the Red Mother – a guardian entity – prepares to thwart the imminent birth of her nemesis, Suffering itself. In an effort to protect its incarnation, Suffering spawns an entire army of avatars known as the eponymous ‘Others’, which means Red Mother needs a hand or two if she is to protect something called ‘The Child’.

She therefore unleashes echoes of her own strength in the form of ‘Daughters’ to stand a fighting chance against the legions of Suffering. Playing as the Red Mother, the player commands squads varying between two to four Daughters during each of the short missions, and the main objective is usually to hunt down small clusters of Suffering’s manifestations.

With an emphasis on body horror and plague iconography, the enemies could easily be the cousins of the creatures from the Silent Hill franchise. The Daughters, in a pleasing contrast, are all sexy fashionistas, and they are randomly generated with a surprising variety of different names, outfits and hairstyles.

In fact, despite the macabre themes, Othercide is really nice to look at. Running on the Unity Engine, Lightbulb Crew have rendered their game in a stark, monochromatic colour palette, which is highly effective at setting the dank atmosphere of the game’s decaying and melancholic world.

The only real colour that ever makes an appearance is red which symbolises the connection between the Daughters and the Red Mother, most notably in their special abilities. During gameplay this becomes a pretty cool visual technique where a single colour on screen makes the Daughters themselves feel powerful and lethal without overpowering the noir visual style.

This is all the more complimented by the game’s beautifully rendered moment to moment animations. Whether in poses as you select one of the Daughters in the menu screens or setting off her most powerful attack on the battlefield, every movement is elaborate and looks awesome. Much of the same holds true for enemies meaning that battles turn into delightfully visceral affairs as your girls dish out devastating attacks, or react with unsettling realism to taking damage.

It don’t matter if you’re black or white

Othercide’s grid and turn-based tactical gameplay is functionally identical to several other I.P.’s that have gone this route, so I shall only touch on some of the defining elements. For starters, the maps are closer to the fantasy flavour of tactical RPG’s since their design hosts a more flat and compact style of gameplay.

Counter-moves (defensive triggers) therefore form a particularly central component of the the player’s strategy since units do not have the option to guard themselves or take cover from enemies. Furthermore, the Daughters can only be germinated (the game’s word, not mine) into four different units basically amounting to swords, spears, guns and scythes.

Lightbulb Crew have generally done a decent job of dividing up the different abilities, attack ranges, strengths, and weaknesses between these four character classes. Savvy players can just as easily play every mission with only one type of unit (as players in the community have proven), or get by with a more balanced squad of each unit type.

Much like the recently released XCOM: Chimera Squad, Othercide’s gameplay is centered on a ‘timeline’ mechanic in that it is not the AI and the player that alternate turns here, but the units themselves. A crucial sub-strategy therefore involves manipulating the timeline through a conservative use of your unit’s action points.

If a Daughter uses less than 50 action points at a time, her next turn comes up much sooner in the order of the timeline. Choosing to spend all of a Daughter’s action points during their turn is therefore only advised if an enemy can be finished off with one more hit, or if a unit urgently needs to get out of range from an impending attack.

Daughters also posses several special abilities and counter-attacks that completely interrupts (i.e. cancels) an enemy’s attack, and sends them right to the back of the timeline. These interrupt actions, however, cost health points to perform, which is a high price when you consider that this game has a roguelite progression system.

There is no option to heal your Daughters between the missions unless you sacrifice another Daughter of the same or higher level. Playing Othercide therefore turns into delicate balancing act of keeping Daughters alive for as long as possible, while choosing to make serious sacrifices for the sake of progress.

If Lightbulb Crew had stopped there, I would now be concluding this review by saying “not as fancy as more established examples of this genre, but definitely worth trying at least once”. Unfortunately, the game shifts from a decent tactical experience into a semi-dysfunctional roguelite due to a progression system overly obsessed with making the player fail.

Othercide has a Groundhog Day kind of thing going in that players will have seven days (or battles) in each run to prepare for one of Suffering’s most powerful creations – the bosses. This mostly involves making your way through the randomly chosen maps, killing lesser enemies, gaining various currencies to unlock skills, and seeing your squad level up.

Too bad then that the difficulty spike for each of the five bosses in Othercide is some of the biggest and most unfair I have ever experienced in a video game. When I faced certain bosses for the first time, they pulverised my entire squad in just three or so hits, while even my most powerful Daughter barely managed to make a chip in their health.

Normally I would just sigh, smash up a keyboard or two, and go back to restarting my runs until all characters are at the right level to defeat the bosses. Eventually, however, I could no longer kid myself that I wasn’t getting bored.

While the maps are randomly chosen, their layouts or enemy placements barely change at all, and I could eventually predict what kind of enemy would spawn, where they would pop up, and what their first attack would be. The game therefore expects the player to go through the same shtick over and over again until the Daughters finally reach a level where bosses are easier to beat.

Worse is that Othercide’s highly nebulous story doesn’t exactly alleviate this tedious slog.  The narrative plays out through a series of highly cryptic cut scenes, and neither the in-game codex nor the lore posted on the official website did anything to alleviate my confusion. Put simply, Othercide’s story just doesn’t make a lick of sense.

What the blazes is this ‘Book of Nostra’ the game keeps preaching at me during loading screens? Who the hell is this ‘Child’ that I am supposed to be protecting, and why on earth am I suddenly fighting them as a boss? What are these ‘memories’ that the Red Mother brings up at every possible chance? Frankly, your guess is as good as mine.

Even those who value gameplay over narrative quality will likely find this approach off-putting because Othercide takes its story so seriously. The game repeatedly drills the player with dramatic voice over cues when you do just about anything, you have to sit through the same, drawn-out cut scene every time you restart a run, and menu items have confusing names to fit the lore of the game. In other words, the story is rather deeply integrated into the gameplay whether the player cares or not.

In the moments where I was enraptured by the beautiful, carefully-designed tactical gameplay, Othercide is truly enjoyable. Between four interesting classes of Daughters, the technically sophisticated AI, and a captivating art style, the developers had most of the ingredients to make a lovely tactics game (even if they left in the  excessively cryptic story).

It is therefore tragic that Othercide makes progression such a tedious chore by sacrificing its pacing for the sake of excessive difficulty. This game’s unhealthy obsession with providing a punishing experience will likely put off newcomers, and yet the repetitious nature of the gameplay makes it a hard sell next to more established I.P’s in this genre. Sorry Lightbulb Crew, Gears Tactics is still the TRPG to beat of 2020.