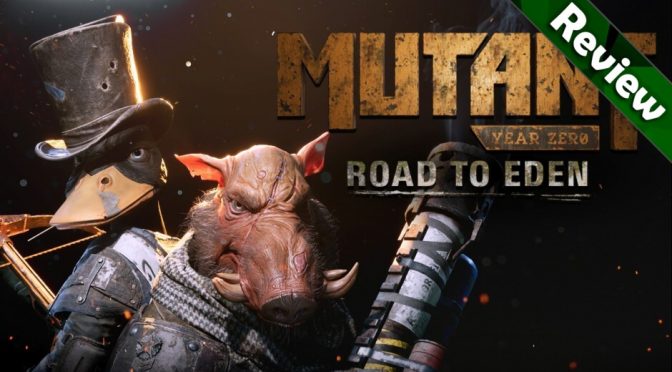 I was never a big fan of turn-based combat and isometric role playing games until I had the pleasure of playing XCOM and Divinity Original Sin. These games were frigging awesome sauce and I am almost certain Mutant Year Zero: Road to Eden’s developers will agree with me. The Bearded Ladies (yes that is their glorious name) are the people behind it and if we want to be precise, the game is based on the Swedish (the devs are also Swedish btw) table-top RPG. The initial plan for the game was to be open-world but thankfully the devs decided against it. This is a niche game that borrows a lot of things from XCOM and gives it a very interesting twist.

Graphically, the game looks really nice and I can go as far to say that it perhaps looks better than XCOM 2 though I don’t think it is better than Divinity 2. Whatever the case it might be, everything – and when I say everything I mean everything, even the game’s physics – are pretty great.

Unfortunately the game does not run great. I couldn’t maintain stable 60 frames even when I dropped everything on low. There are several graphics options and some of them do impact the performance considerably. I know that my PC is not the best (or a high-end) but I was expecting better scalability and definitely better framerates on Low settings.

Fortunately the game’s nature makes it playable even on low frames due to the isometric camera and especially its turn-based combat mechanics (which is obviously much slower compared to real-time combat).

“I’m the hero you’re the zero”
– Farrow right before blowing some bandit’s brains out.

Regarding problems I had only a visual bug that went away by fast travelling and a mission bug which I am pretty sure I did something that the devs did not expect. The mouse and keyboard controls are fine but I didn’t get a chance to try the game with a gamepad. My only minor annoyance was the subtitles which kept resetting every time I exited the game.

I did enjoy the music in the game and it did blend in nicely with the post-apocalyptic scenery. Sounds and ambience are also fine. Voice acting is pretty decent, nothing extraordinary but works absolutely fine.

The voices of the main characters are pretty good and they do sound a bit like animals, or at least close to what we usually hear in movies or TV shows. One thing I love is the shaman’s death yell, it is freaking hilarious.

You take control of some mutants who are called “Stalkers” and their objective is to explore the wasteland in order to help civilization’s last remaining outpost called “The Ark”.

These Stalkers roam the wasteland called “The Zone” with the main objective to find “Eden”; a mythical place left behind by the previous civilization. You start the game with two characters and along the way you find more mutants who are willing to join you in your journey. Every character got their own unique look, abilities and dialogue lines. The main characters are Bormin and Dux and they are cool as ice; especially Dux who is the funniest of the group by far in my opinion.

“Another one bites the ducks”
– Dux after getting a kill.

The cut-scenes are cool and I do dig the art style even if they are cheap. I also like the little pieces of dialogue that occur each time you return to The Ark.

The writing is pretty good and actually funny even if the whole story is a bit over the top; well…most of the writing.

“You are mistaken I give a duck”
– Selma giving Dux a hard time.

As always the most important part of a game is its gameplay and it is awesome here. Basically, imagine a light version of XCOM’s 2 gameplay. First of all there is a map and by exploring it you unlock new areas. Each area has a suggested level so some of them might not be a good idea to visit until you match the suggested level, but you are free to do as you please. Of course there are some closed areas which are linked to the main storyline, meaning that you will have to reach a certain point in the story in order to gain access to them. The map is pretty big to be honest and it will take you plenty of hours to fully explore it.

Your squad is formed by three members. You start with two and along the way you get more and eventually you can choose from 5 different characters which all have a unique ability. Of course that does not mean that all the skill trees are completely different, some of the members do share some of the same abilities but no character is the same.

As I said, the combat system is very similar to  XCOM 2 though not as complex. Mutant Year Zero: Road to Eden is a tactical turn-based game and in each turn, you have two action points to use and you can move or perform actions like shooting, overwatch (guard mode) or special abilities. Each action costs one point but some costs two. Cover, flanking and general strategic positioning is very important in this game even on the lowest difficulty. Covering behind high cover is essential as low cover or no cover at all will result in a very quick death.

While the game is not easy, it has some differences as opposed to XCOM 2 from which it was heavily inspired. Mutant Year Zero: Road to Eden features a more semi-open world and is not mission-based. You can initiate combat whenever and wherever you want, as long as there are enemies around. Stealth is also a very important factor as you can sneak around and create ambushes for surprise attacks, catching enemies unaware in the open. You can also use silent weapons in order to avoid detection and if you manage to separate an enemy and kill him in one turn he will not alert the rest of his never-showered unhygienic buddies.

So you see I really do like the difficulty balance in this game. The fact that you are free to do as you please is awesome and thanks to this design choice you can replay a battle using a completely different approach or strategy.

Of course with exploration comes looting and there is plenty. You collect scrap and old guns which you use to buy or upgrade stuff. There are also loot chests scattered around the map and usually each area has at least one. You can actually see what is inside the chest after you open it so a big “Thank You” to Bearded Ladies as I do not like when you open empty chests and get a mere notification of what is inside.

You can return at any time back to The Ark for resupply, instructions, weapon modding, etc. Weapons can be upgraded (they also change in appearance) to a better version with better stats. Weapons have also two mod slots where you can enhance them with scopes and other attachments. My advice is to avoid buying any weapons or armor from the trader if you like exploring environments as you will probably find every gun and armor in chests even if you do not find all of them. As such, you should better spend your money on consumables. Also, make sure to keep your weapon parts for the later weapons as you will not be able to upgrade each weapon you find to its maximum level.

Mutant Year Zero: Road to Eden is a slow game were you need to think each and every action since it could be your last. Thankfully, you cannot lose any character even if they die in combat, unless of course you choose to play with the permadeath option enabled. If you are that hardcore, good luck with that as you cannot even recruit other members.

Still, and while I really enjoyed the game, it is not perfect. The camera is not great meaning it can regularly glitch through walls, the missed shots look ridiculous, the slow motion effects that have been implemented are weird and probably misplaced, but I had tons of fun and I will most definitely replay it in the near future.

“Something is wrong I feel it my feathers”
– Dux.

Mutant Year Zero: Road to Eden is one of those games that do not get the attention they deserve. Even though it is not a AAA game, it kinda feels like one.

There is quality and quantity to be found in this gem especially at its current price. This is no XCOM 2 in terms of combat, customization and length. The game is close to 20 hours if you explore everything and, in my opinion, it totally justifies its price. As I said though, I love the XCOM and Divinity games so someone who is not familiar with this type of games might not have a great time due to the turn-based combat and the increased difficulty (compared to other genres or games). Now if you are a fan of these aforementioned games you should go ahead and give the game a try; I don’t think you are gonna regret it.